When Did “Shark” Become a Dirty Word? 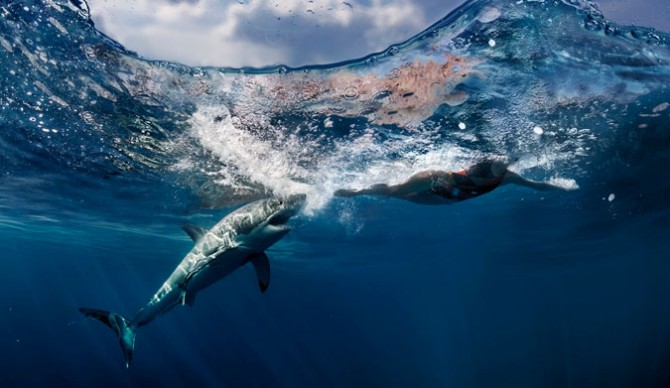 Shark. The word strikes fear into the heart of many sailors, surfers, and swimmers worldwide. From this, a film franchise and successful sequels and spinoffs were launched with a creepy theme song of just two effective notes.  Sharks became so fearsome that we could add them into any situation as the protagonist and get the public’s blood pumping (see: Sharknado 1, 2, AND 3). The very word can intimidate as a prefix or suffix in any extremist description. I, myself, am afraid of loan sharks, pool sharks, Shark Tank, Shark WEEK, and Shark steam vacuum cleaners thanks to the carefully placed marketing and propaganda surrounding these largely misunderstood creatures of the deep.

It is not a secret that we are on a heightened alert status and more often on the defense when it comes to protecting ourselves from potential risks associated with shark interaction. What exactly is it that has placed the shark on the top of the list when the subject of aquatic fear is mentioned? My personal experience through open water sailing, paddling, and observation of many interactions between human and shark has brought me to the following three conclusions.

1.  Increased sightings vs. increased numbers.
It seems that lately there have been more reports of sightings close to public beaches, entrances into calm harbors, and attacks upon water bound humans than ever before. Everywhere you look, there is a new video, photo, or story that takes prime time slots during reporting. It is daft to think that we are observing increased numbers of sharks. They have always been there. We know this. We just don’t like to think about it. Out of sight, out of mind, right? What we ARE experiencing, however, is an increase in waterproof personal recording equipment being brought along on a regular basis when exploring the ocean. It seems that every kayaker, paddler, and surfer has a GoPro mounted somewhere on their person or held precariously between the teeth. I had an exhilarating experience in early 2011 when my 19-foot paddleboard happened to come side by side with an eight foot, 350 pound Mako shark entering a busy harbor channel. We traveled together for a few hundred yards, the Mako crossing back and forth innocently from the east to west ends of the channel until we came across a harbor side restaurant that overlooked the channel. I was drafting this bad boy when from the restaurant I heard a woman shriek, “is that a f—king shark?!” Before I could react, most of the patrons were pressed up on the glass surrounding the bar or hanging over the railing with smart phones in outstretched hands capturing every moment. I was merely half a mile from hitting the beach but when I did, I already had friends asking me if I had heard about the shark following a guy into the harbor and warning me to be careful. It appears the news now travels faster than we do.

2.  We are more inclined to report on every single sighting.
Case in point, only days ago a lone stand up paddler witnessed what he believed to be an eight foot great white shark swimming into (and back out of) the Dana Point Harbor mouth near Doheny Beach in Southern California. No actual video or photographic evidence emerged from the sighting, but it was immediately picked up by many local news outlets and reported as a breaking story. In the same timeframe, a 40 foot gray whale was sighted in that very harbor with minimal chatter about its arrival and departure afterwards. No one heard about the influx of exotic fish being swept into the area lately by the effects of El Nino or the multiple sea turtles being spotted, tagged, and released just north in the Santa Monica Bay area.  We know what makes news and what doesn’t. Our media likes to pull on our heartstrings more often than not. The fact of the matter is that there will always be an increased number of predators at the entrances to harbors, bays, and areas where commercial fishing and chumming is in excess. Who wouldn’t want a free meal?

3.   Common misconceptions about sharks.
I read a great article recently entitled, How ‘Jaws’ Ruined Everything for Great White Sharks. It really drives the point home as to how film and media uses the idea of the “rogue shark” to get inside our heads and makes us pay attention. Not to say that attacks or test bites from sharks do not exist, but the myth that a shark is hell bent on wreaking havoc on your swim steps or semi-inflatable just to get to your meaty fleshiness is a bit farfetched.  The “rogue shark theory” states that a shark that bites is more likely to bite again since they now have a taste for human flesh. In fact, Jaws was inspired largely by the 1958 book called Shark Attack by Victor Coppleson, the theorist behind this and many other rogue animal myths.  Among sharks, Victor and others suggested that Bengal tigers and elephants also routinely go rogue.

It is also believed that while sharks have an acute sense of smell, they have terrible vision and often mistake surfers in wetsuits as seals or other mammals. Sharks have amazing visual acuity and even have reflective tissue in their retina which allow for deep ocean and night hunting. A shark, by nature, is a curious animals and is known to bump, scrape, and test things to gather more tactile evidence in determining what it is actually dealing with.  This curiosity is also linked to the fact that a shark must be picky about what it ingests. A less than optimal meal considerably slows down the animal’s already fickle digestive tract and prevents them from eating other things. This is the hardest evidence against the ‘taste for flesh’ theory.

It is not unrealistic to believe that your proximity to wildlife determines the level of risk you take. But I’ve not heard one suburban individual express concern that they may be mauled by a rogue raccoon while taking their trash can to the curb. Millions of dog owners allow their pets in their own homes, however canines maul and kill thousands of people every year. The final worldwide death count from shark attacks in 2014 as reported by the International Shark Attack File stands at a whopping 10. On the flip side, humans kill an astonishing 73 million sharks intentionally per year. Another 100,000 are unintentionally killed as a result of fishing by-catch.

In retrospect, at an average of 500,000 intentional homicides per year, it could be concluded that WE as the human race are the most dangerous species on the planet Earth.

Will Schmidt operates out of the Southern California coastline as a lifestyle athlete and a brand ambassador for SIC, Nemo Equipment, Carapace Wetsuits, Switch Vision, Astral Designs, Isvara Organics, SUP Gladiator, AirheadSUP/DryPak, Goal Zero, and Vitargo. Follow his adventures through his website, www.areyouinspiredyet.com as well as on Instagram: @willschmidt_official