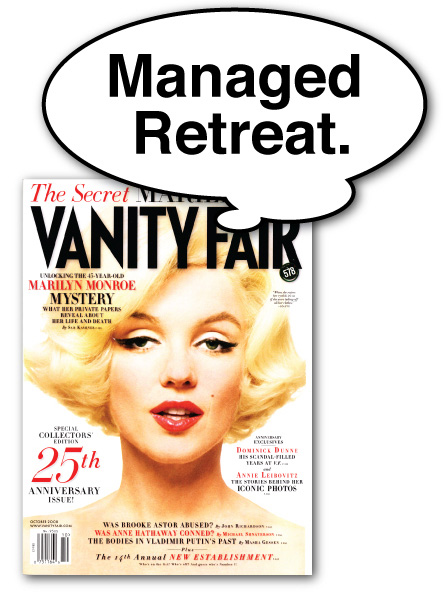 Vanity Fair on “managed retreat.” A rarity in the eyes of some but a welcome rarity nonetheless. Photo courtesy of Jim Moriarty/Surfrider Foundation

I love it when terminology jumps categories. I love it when an insider term from a niche group becomes accepted and used by the mainstream.

It feels like that is just starting to happen with the phrase “managed retreat.”

I’ve written before about the postitive elements and negative challenges associated with jargon. Jargon is language or terms that both enable insiders to speak in an abbreviated form with each other but is also foreign enough that it can push non-insiders away.

“Is that TMDL part of the EIS?”

If you know what that means, you’re an enviro, an insider.

We all notice when others are speaking in shorthand that we don’t understand. Sometimes we even get mad about it. Can’t they just speak English so we can all understand? It’s my belief that few of us know we speak without our own insiders-only jargon and yet we do.

I’ve noticed this tension over the years because I came from one world (technology) and entered another world (nonprofit/ environmentalism). I can see people glaze over when phrases like LAMP come up and see others drift off into anther world when the term accretion is used.

Which brings me to the image on the left: Vanity Fair and the term “managed retreat.”

Vanity Fair recent wrote a great piece on the subject of managed retreat. That, by itself, is noteworthy. It’s a Vanity Fair piece, so it’s not about hardened coastal structures (see that jargon?) per se. It’s about Steven Spielberg, Dustin Hoffman and Barbara Streisand’s $100M Malibu beach lot.

I realize that it’s not the first time a mainstream publication has taken on a complex topic and sprinkled it with celebrities to make it interesting. Still, I find it noteworthy that the phrase “managed retreat” made it into this article as much as it did. In fact, managed retreat is the central theme of the piece. What do we do when the oceans rise? We retreat, in a managed fashion.

Here is Surfrider’s formal definition/description of managed retreat. It’s 3,100 words. It’s what I call “wonkspeak.” It’s our most accurate version of what that term means.

Here is a photo my daughter took 30 days ago. It suggests why those 3,100 words matter.

We’re happy to see managed retreat making the jump into the mainstream. Now let’s work together to address what it actually calls for.