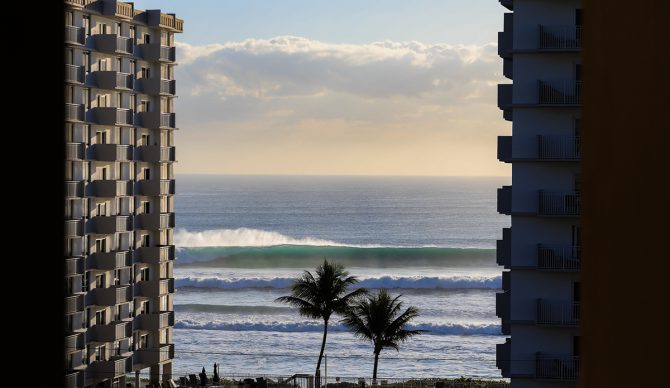 How often does South Florida look like this?
Photo: Clark Leanord

In 2017, State Representative Katie Edwards filed a piece of legislation that would have blocked any local governments from protecting public access to Florida’s beaches. While the 2017 version of the bill did not pass, it would have effectively created barriers that would preempt local cities and municipalities from passing new or enforcing any existing customary use ordinances. State preemption of local government authority is not a new thing in Florida as municipalities currently prevented from banning bans on plastic bags within their jurisdiction.

However, during the 2018 Florida legislative session SB 804 & HB 631 “Possession of Real Property” was introduced by Representative Edwards and State Senator Passidomo, passed by the assembly, and signed into law by Governor Rick Scott. This bad beach bill effectively prohibits all customary use ordinances and instead requires that a judicial determination for a customary use claim be determined by a court on a parcel-by-parcel basis. This move prevents local government entities from regulating and protecting the public’s recreational use of the surrounding beaches and effectively strips cities of their right to home rule – despite the impact that this decision will have on local tourism and economies.

What does that mean for surfers and beachgoers in the State of Florida?

The legislature doesn’t give a flying F*&$ that the beach you go to has an epic wave. It is all about private interests and profit, where upwards of 60% of the state’s beaches are already privately owned.

This new law, which goes against Florida’s longstanding customary use doctrine, becomes effective on July 1st, 2018 and essentially gives private interests (Hotels, condos, etc.) the ability to ask the public to leave the dry sand up to the high-tide line. It also provides them with the ability to legally trespass individuals from this “property” as the bill effectively allows private entities and landowners to restrict the public’s access to beaches as these “private paradise” areas until proven otherwise in court, as they are now backyards for personal and commercial use.

“Isn’t the Sunshine State known for spring break parties, no income tax, alligators, bad drivers, and its white sandy beaches?” is probably exactly what you’re asking yourself right now. Are you scratching your head yet? Don’t people visit Florida for beach vacations? Aside from oranges and crazy rednecks, the beach is Florida’s identity.

This bill “really does make it harder for local governments to pass beach access protection,” stated Marilu Cristina Flores, the former vice chair of the Miami chapter of the Surfrider Foundation, in the Miami New Times.

While the recent bill allows cities to maintain public access ordinances established before 2016, it has effectively targeted any new local legislation since that point in time.

“The reality is that we’re entering uncharted territory, and we really don’t know how people are going to exercise their new rights as property owners on the beach and how that’s going to impact all of us…we just don’t know,” Marilu Flores of Surfrider Miami told The Miami New Times.

Here’s a breakdown of the bill (HB 631, Possession of Real Property) – which was signed into law by Governor Rick Scott and sponsored by State Representative Katie Edwards Walpole (D- Plantation) and Senator Kathleen Passidomo (R- Naples):

–Only Section 10 (beginning at line 362) pertains to beach access. No need to read the rest of this bullshit bill as it pertains to other property issues across the state. Note that section 10 is the last section of the bill. No wonder so many people missed this when it was being discussed during the legislative session. Edwards and Passidomo are sneaky politicians who knew that even though we are a passionate bunch, surfers don’t know how to read too well and they hid this nonsense at the end of a bunch of other legislative mumbo-jumbo we would never read.

-While almost 60% of the beaches in Florida are private, this bill does not make all beaches private — or at least not 100% of all the beach area. The public has the right to access all beach areas seaward of the mean high water line (which is owned by the state). This essentially means that the public has access to all wet sand, but not to all of the dry sand above the high tide line. According to Article X, Section 11 of the Florida Constitution, the land below the mean high water line is held in trust for the public. Other factors that may affect the public’s right to access for a particular parcel of beach (ie. public vs. private) include: whether public funds have been used for beach dredge and fill projects, if there are implied or explicit easements or dedications, and even the public’s historic use of a beach (although this one may now be in question under the exemptions to customary use law) – but this will all now be subject to court decision under HB 631.

-Ultimately this bill makes it difficult for local governments to protect the public’s right to beach access, which is very confusing for surfers, beachgoers, local economies, and beachside communities. A local Miami-Dade surfer who asked to remain anonymous said “this sounds like a whole bunch of shenanigans where the local government is protecting monied interests such as developers, hotels, and condo associations while disregarding the general public who are the ones that utilize these areas and enjoy the most benefit. Who are they protecting these areas for? Big-wig real estate investors? When a surfer can’t even cross the ‘dry’ beach to get to the water, you know something is wrong with the world.”

So what can you do to protect your interest in the beach?

If you don’t live in Florida, fight like hell if something like this appears on your state’s legislative agenda.

If you live in Florida:
–Contact your local city and county officials/representatives and ask them to take action on moving forward with the newly established legal process for declaring customary use to protect your local beach access.

-Volunteer with your local Surfrider Foundation Chapter as beach access is one of the core missions of the organization and your passionate work could be the catalyst for tipping the scale in favor of common sense legislation that works for the public interest.