Why Spearfishing Isn’t All Just Blood and Guts 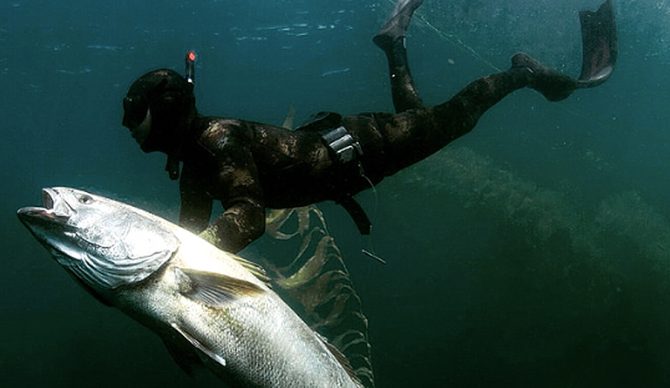 It’s counterintuitive to think of spearfishermen as conservationists. After all, at the heart of the sport lies the hunting and killing of aquatic animals. There’s something undeniably primal about the entire process. However, as we’ve seen throughout history, it’s entirely possible to kill a creature while maintaining the utmost respect for it and its natural habitat. And that’s exactly what modern day recreational fishermen and watermen aim to do. In fact, these underwater hunters are generally at the forefront of the marine conservationist movement. They spend so much time in the ocean that it feels like a second home to them; one they are constantly fighting to protect.

When the general public thinks of recreational fishermen they often conjure up images of folks standing on a boat or dock, holding up a dead, bloody fish, while smiling about the life they just claimed. There is definitely a sense of pride and satisfaction derived from killing a prized fish. Yet, the environmentally conscious fishermen earn the right to feel that pride. They aren’t savagely ripping through the ocean looking for their next kill. They’re finding new ways to respect, maintain, and replenish marine habitats, using their sport as a platform to raise awareness.

Take Bill Shedd for instance. He’s the president of the American Fish Tackle Company (AFTCO) and the son of Milt and Peggie Shedd, co-founders of the Hubbs-SeaWorld Research Institute (HSWRI). The HSWRI, along with AFTCO, have been committed to protecting our oceans and nurturing sustainable fishing practices since the 60s. AFTCO has actually donated 10% of their annual profits to this cause since 1973. In the words of Shedd, “there is no other tackle and clothing company who has done more for the ocean than AFTCO and the Shedd family.” It’s just one instance of fishermen taking an active role in securing a future for a part of our environment that we all rely upon so much.

That’s the major distinction between recreational and commercial fishing. The former is for sport and nourishment while the latter is purely for profit. And those that fish for profit are far less interested in the ethical use of our oceans. In our capitalistic society, businesses are expected to churn a profit by whatever means necessary. That creates a slippery slope to overfishing, pollution, and a complete disregard for sustainability and marine life as a whole.

“The problems happen when you have large scale commercial interests taking all they can from the oceans,” says CEO of Gannet Dive Company, Garo Hachigian. As a diver and member of the spearfishing community, Garo understands how important fish are as a source of nutrition for the entire planet. However, most large-scale seafood businesses don’t realize how finite marine life can be. As he states, “we need to figure out a way to feed the world without destroying it.” And demonstrating ecologically principled ways of fishing is a necessary start.

Spearfishermen have to find ways to thrive in an inherently unwelcoming environment. Unlike land hunters or commercial fishermen, spearfishers definitely do not have the upper hand. They have to hold their breath (sometimes for up to 2-3 minutes straight), while swimming in cold and murky waters. They can’t smell, their hearing is practically useless, and their visibility is severely impaired. On top of all that, these underwater hunters are usually seeking out elusive creatures that are perfectly adapted to their environments. It requires patience, years of experience, and an incredibly fine-tuned skill-set to catch even a single prized fish.

This is why spearfishing is intrinsically sustainable. Even if spearfishers didn’t have an ounce of care for conservation, these physical limitations would automatically restrict their environmental impact. A commercial fishing vessel can cause more damage in a single outing than a spearfisher could ever dream to cause in multiple years underwater. John Park, an active spearfisher and owner of Fish 101, says “most dives, [he] never even pulls the trigger.” This is the case with the majority of spearfishers.

Many recreational fishermen are members of clubs and nonprofits like the International Underwater Spearfishing Association (IUSA), Long Beach Neptunes and LA Fathomiers. These groups work both locally and internationally to advocate and facilitate the most ecologically friendly spearfishing possible. They also work side-by-side with national organizations like the Ocean Resources Enhancement and Hatchery Program (OREHP) and HSWRI. The open dialogue between spearfishermen and scientists is an increasingly important facet of the sport and the marine conservationist movement.

Again, it’s not intuitive to think of recreational fishermen as scientific researchers. Yet, by spending so much time embedded in marine habitats, spearfishermen are often some of the first observers to recognize subtle and potentially dangerous shifts in the environment’s health. Even without any scientific training, these divers instinctively understand when a species of fish or their respective habitats appear damaged. By reporting these changes to actual marine biologists, spearfishermen act like de facto field agents for hugely important environmental research. 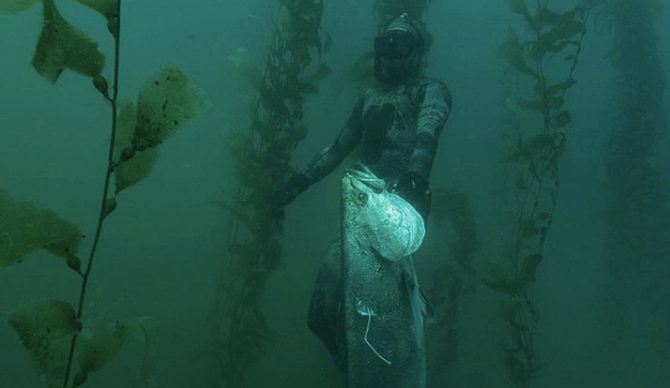 Both John Park and Garo Hachigian do their part to promote eating locally. As Park notes, “local, seasonable, and sustainable goes hand-in-hand with freedive spearfishing.” And Hachician says that he only eats local fish that he catches. In fact, the most gratifying parts of spearfishing involve the act of providing sustenance for oneself, rather than finding trophy fish to brag about.

Consumers often neglect or don’t realize the true environmental impact and extent of the the carbon footprint of imported food. By advocating locally sourced diets, spearfishermen aim to improve local economies, boost small businesses, decrease our overall reliance on other countries, and make a serious dent in the fight for our planet. As an added bonus, eating locally creates a newfound respect for local ecologies, which in turn fosters environmental awareness. It all adds to an ever-improving balance between utilizing our natural resources and doing our part to help maintain them.

That delicate give-and-take is further improved with the annual Kirk McNulty White Seabass Spearfishing Classic and the Jack White Seabass Open. These spearfishing tournaments both contribute to the HSWRI and its affiliate, the OREHP, and they both work to increase environmental activism while promoting healthy and sustainable ways to utilize and enjoy our oceans.

Both tournaments mandate that contestants donate their fish heads to research, while the profits from the Kirk McNulty Classic are given directly to HSWRI and the King Harbor Ocean Enhancement Foundation. OREHP and the HSWRI have been at the forefront of the scientific study and practice of fish population replenishment since the 1980’s. While the donations from each contest are relatively small, they go a long way toward helping these scientists develop new ways to give back to the ocean.

The tournaments feature spearfishermen of all ages and skill levels. Anyone with a desire to fish in a sustainable way while spreading the seeds of activism is welcome to register.

So while it might not be inclined to think of spearfishermen as conservationists, the two definitely go hand-in-hand. Anyone who spends enough time underwater, observing the marine life while stretching their physical limitations, is going to develop a deep yearning to protect what’s at hand. And what’s at hand is a bountiful mother ocean.

Editor’s Note: This feature was co-authored by Rhett McNulty and Stephen Roth of OceansGlobal.org