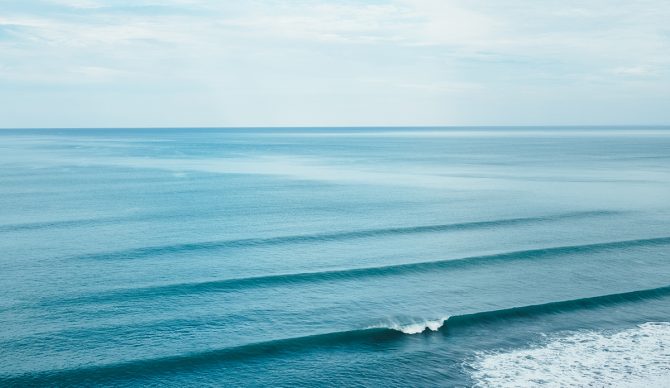 When I’m not working, I’m usually surfing. It doesn’t matter whether it’s the height of summer or depths of winter. New England’s icy waters might not be the friendliest for squeezing into a few pounds of neoprene, but it’s all worth it when there’s swell.

Surfing affords one of the most intimate relationships between humans and nature. It doesn’t matter how skilled you are, world-class pro or first-timer, you’re dependent on the waves and you’re always sharing them in some way with the marine life beneath you. Look just a few weeks back, when Conner Coffin rode a wave at Margaret River with a pod of dolphins leading him down the line, nearly brushing his board the whole ride.

This human/nature connection is partly why many surfers are among the biggest ocean defenders. We’ve faced down polluters who threaten the water and developments that threaten waves. For International Surfing Day on June 15th, many, like me, paddled out under the World Surfing League’s and Surfrider Foundation’s banners to declare “Stop Trashing Waves.” But if we’re serious about protecting our oceans and the life beneath them, our vision needs to expand. We’ll need to look beyond personal choices (like using reusable straws or driving hybrid cars) and instead join collective movements. And those movements will need to look beyond our own local surf breaks. We need to challenge a global system, which “thinking small” offers us little-to-no influence over, to save our waves.

Oceans and Identity
Honduras might not offer strong surf, but a community there shares a similar intimacy with the water. The Garifuna are descendents of shipwrecked Africans who escaped slavery, mixed with the locals and set up communities along the country’s northern Atlantic coast. For them, like us, their link to the beaches and the ocean is part of their identity. They’re fisherfolk and stewards for the coast they’ve inhabited for centuries. But they’re also under threat.

Their coastal lands are being stolen, with government approval, for tourism, a naval base, palm oil plantations and oil and gas extraction — all driven for profit and power. Over decades, at the behest of local and international big business, the government has invalidated Garifuna land claims and sent in the military to jail and evict residents.

Narco-traffickers have also targeted the area, violently removing indigenous communities to run drugs through hidden creeks and remote locations. In the past decade, the Garifuna have lost more than 80 percent of their land.

But even when they’ve held on, they’ve remained under the gun. Like the rest of the world, climate-change-charged storms are battering and eroding the Honduran coast the Garifuna call home. And as a recent study suggests, the climate crisis could drive a loss of one-sixth of all ocean life by the end of this century, including fish that the Garifuna depend on.

I work for the nonprofit Grassroots International, and for years we’ve partnered with the Black Fraternal Organization of Honduras (OFRANEH, in its original Spanish). We provide the necessary support so they can organize their own community and win back what was taken. They’ve been successful, too. Their nonviolent resistance movement has reoccupied their land, taken down fences and walls put up by developers, and brought their ancestral claims to court. They won 40 hectares of land in Vallecito back in 1999, and in 2016 the Inter-American Court of Human Rights ordered reparations from the Honduran state. In areas like Trujillo, the Garifuna encamp day and night, readying for when their land is finally returned.

But the struggle continues. Despite winning court battles, OFRANEH leaders continue to face harassment and imprisonment for their activism. With an unchecked government, brought to power by a 2009 coup, Honduras has become one of the most dangerous countries for environmental activism. Over 130 environmental activists have been murdered since 2010, including at least five Garifuna.

The Oceans Have No Borders, Neither Should We

The sentiment behind “Stop Trashing Waves” is admirable. We need more knee-jerk eco action, in every sport and in every social group. But the scope of the problem, and the forces stacked against us, means that while picking up beach trash and biking to work are important, they frankly are not enough when facing a global crisis. Just 100 companies are responsible for 71 percent of greenhouse gas emissions; we can’t only act locally to stop them.

Instead, surfers could do more to take inspiration from, and offer solidarity to, grassroots activists like teen climate strikers or the Garifuna land defenders. The Garifuna are just one community among the millions of people under threat from climate change and coastline theft. As Miriam Miranda, coordinator of OFRANEH, has said, “If the problem is global, we have to have a global response.”

The ocean knows no borders; waves don’t stop at the end of one country’s frontiers. Neither should the scope of our concerns. If we’re serious about keeping waves from getting trashed, we need to protect the water everywhere and the people best suited to defend it: local communities, linked globally in resistance.