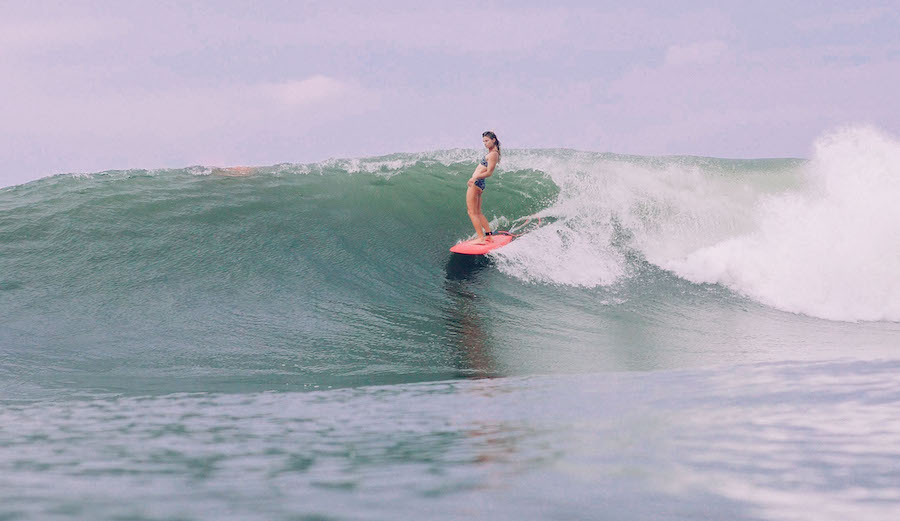 Leah Dawson’s approach on a wave is unlike that of anyone else. According to her, it’s the result of years of exploration of identity and self. Photo: Connor Guest

Editor’s Note: On August 18, The Inertia’s EVOLVE Summit will celebrate people from the surf and outdoor worlds that use their influence to make a positive imprint on society. Leah Dawson, a professional surfer and co-founder of the Changing Tides Foundation, has one of the most unique approaches to wave riding on the planet. At our inaugural EVOLVE Summit, Leah will be speaking about how the future of surf and the outdoors is female, and we’ll be unveiling a special project we’re really excited about called Alternativa that also features Kassia Meador and Lola Mignot. The event is sold out, but EVOLVE panels will be streamed via live webcast on theinertia.com, as well as our Facebook page and Youtube channels starting at 2:30 PM PT on 8.18.18.

It’s apparent whenever anyone paddles out into a lineup that it’s predominantly male. So, there’s always been this separation between what a woman looks like in the water and what a man looks like, and specifically the way each is supposed to approach a wave.

There was a point back when I first started riding single fins where I started using my hips more. And stood up straighter. I started seeing photos of myself and those two switches made me look more feminine on a wave. I immediately recognized that and it started to take over my style and my approach. I started trying to simplify my surfing and took a break from trying to force maneuvers. It caused the feelings of having to do something on a wave to strip away, and I started to let the wave tell me where to go and what to do.

My own exploration of style has led me to believe that surfing could look totally different than how we think it should appear – getting vertical or maximizing scoring potential. I’m not certain that we’re surfing the only way that surfboards were meant to be ridden. For me, it’s a constant experiment of body language. Innately, because I’m so in love with being a woman, on the water that’s where I think my femininity continues to explore and express itself. It’s my most practiced medium and where I’m most comfortable and familiar.

I’ve learned so much about myself through this exploration, and it accentuates my feelings of inner beauty while on land. And that, in turn, propels me to be a better human for our planet. I think inner beauty is the most important aspect of life and surfing kind of allows us the opportunity to express that. Yes, there is technical ability, too. But that just comes down to time in the water. It’s like approaching dancing. There are so many different styles. And in surfing, we’ve only just begun to explore what those styles and capabilities are.

For more from Leah, check out this episode of CREATORS: