For the Surfrider Foundation’s Chad Nelsen, the Mission of Saving the Ocean Is a Relentless Process 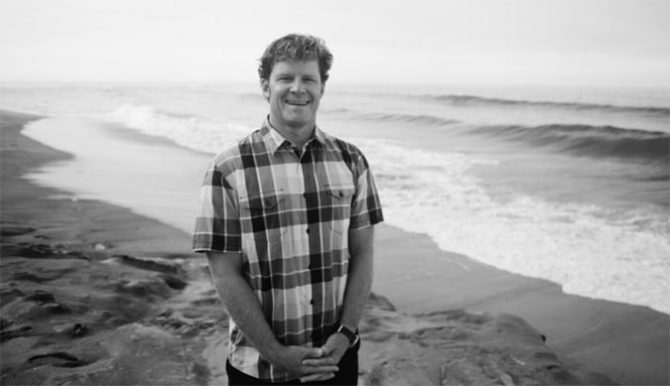 Editor’s Note: On August 18, The Inertia’s EVOLVE Summit will celebrate people from the surf and outdoor worlds that use their influence to make a positive imprint on society. The Surfrider Foundation’s Chief Executive Officer, Chad Nelsen, is a true steward of the ocean and gladly accepts his fate as an environmental champion: that he’ll forever be working to save our seas and coastal places. At our inaugural EVOLVE Summit, Chad will be speaking about protecting the places we play. Get tickets now.

My awareness of environmental issues came directly from my love of the coast and ocean. Through surfing, swimming and fishing, I witnessed changes in the health of the ocean environment that motivated my interest in protecting it all.

I grew up in Laguna Beach surfing, fishing, and was a lifeguard in the late 80s and early 90s. In those days the communities behind Laguna Beach — Irvine, Aliso Viejo — none of that really existed. You had farms and orange groves that ultimately got converted to homes. And there’s nothing necessarily wrong with that growth occurring, but there were problems with the way it was all done.

For example, we’d had friends that lived in Laguna Niguel growing up. When we’d drive to their house we’d see the “cowboys,” which were really just people managing cattle in what was then the Irvine Ranch. And then there were just miles and miles of orange groves, strawberry farms, and all this other agriculture. It all went from being a place that was relatively undeveloped — at least from a housing standpoint — to a place where you now have these major urban centers like Irvine with hundreds of thousands of people living in tens of thousands of homes. And that’s all happened from probably the mid-1980s until now, which is pretty rapid. By paving over what was once open space, we created an environment that causes urban runoff problems and now we’re just trying to go back and fix it.

When I was a lifeguard, we’d go out and spearfish and dive but there just weren’t that many fish out there. All the older lifeguards told stories of how rich it used to be, going out in the afternoon and collecting enough seafood to come back and hold an entire luau that night. But when I was fishing, legal-sized fish were hard to find. The common understanding was just that it was all fished out. And so I remember just taking that for granted at 16, thinking “Oh, it’s fished out. I guess I missed that.”

Then I went to grad school and I learned about ocean conservation. I learned that marine protected areas can be a tool to restore those impaired ecosystems. Today, Laguna Beach, for example, has a marine reserve that’s incredibly controversial because many fishermen hated the idea of creating no-fishing zones. But six, seven years later there’s also no question that marine life is coming back. California’s been a success story in that way because we have better fishing regulations than we used to have. We have this amazing network of marine protected areas and no-take areas that are definitely bringing marine life back. So looking back, I think what motivated me to get involved with Surfrider was watching Orange County develop so rapidly — seeing things like water quality impairment increase over time. There wasn’t an “a-ha” moment, just a combination of these factors and learning about what could be done to solve our problems.

For another example, we arguably got lazy as a society, consuming all this throwaway plastic, and said “Wow, we’re actually killing the ocean with this stuff. Let’s avoid the straws and the bags. Starbucks doesn’t need to serve coffee in disposable cups with disposable lids.” It’s the same pattern: understand the problems, find the solutions, get political will, and change habits.

A quote from California coastal protection legend Peter Douglas sums it all up well: “The coast is never saved; it’s always being saved.”