A Jibber’s Delight and the Pedestrian Influence in Snowboarding 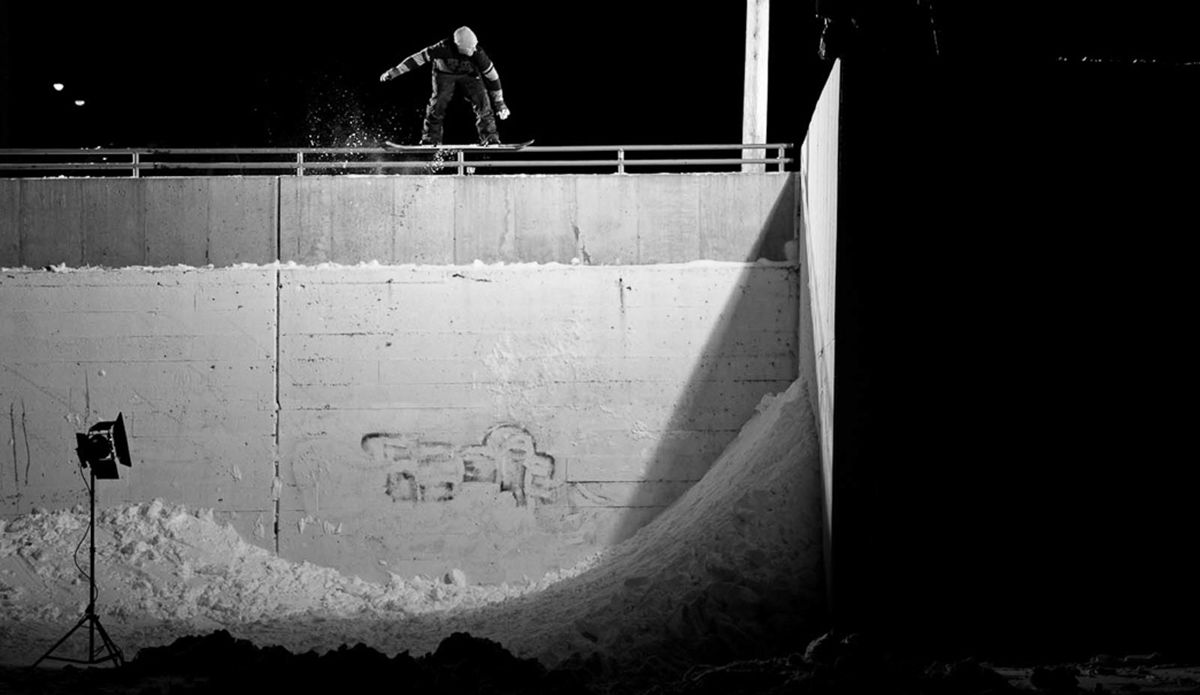 Bringing it back to our all time favorite corner wall, Seth Huot locks in a ’50-50 pop-over fakie wall ride redirect’ in the middle of the night, furthering his efforts that season in building a solid X Games Real Street video part. Photo: Blotto 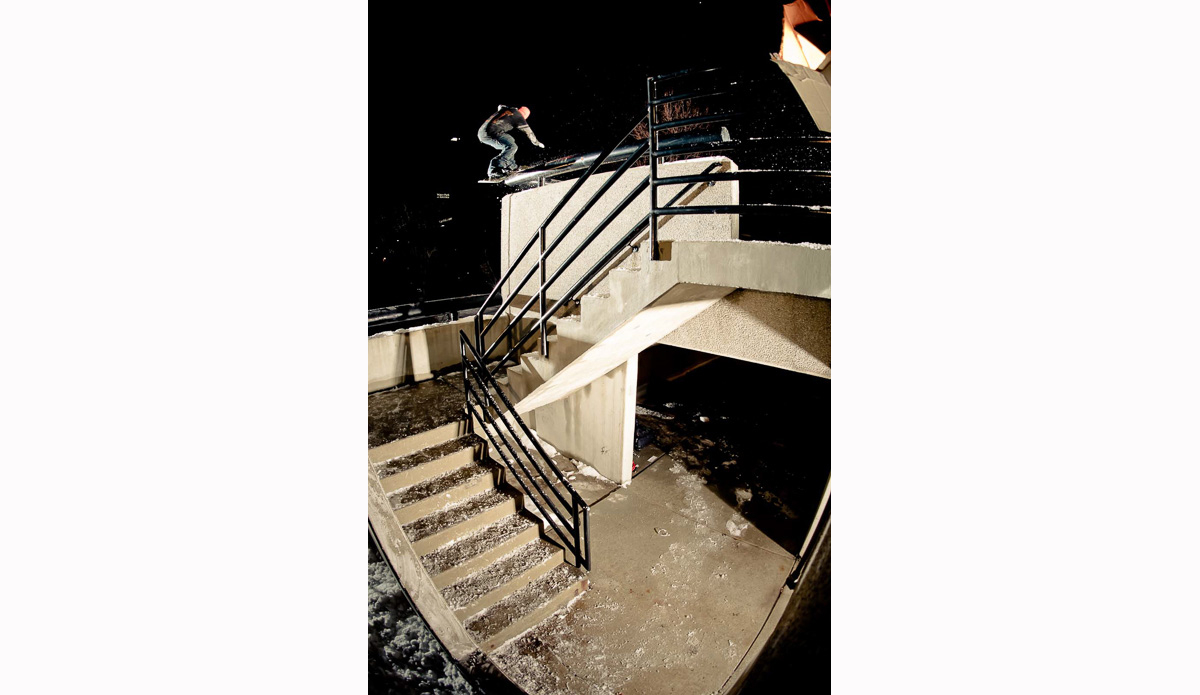 A ‘gap-to front board drop down’ is a wicked maneuver, because the technicality involved in jumping over a small gap, landing on a big round-bar, sliding for a ways between your bindings with your backside leading the way, then dropping down to ground level from the second story is nerve racking. Seth Huot definitely paid the piper a coupe of times before riding away clean and racking up his first shot of an X Games Real Street segment. Photo: Blotto 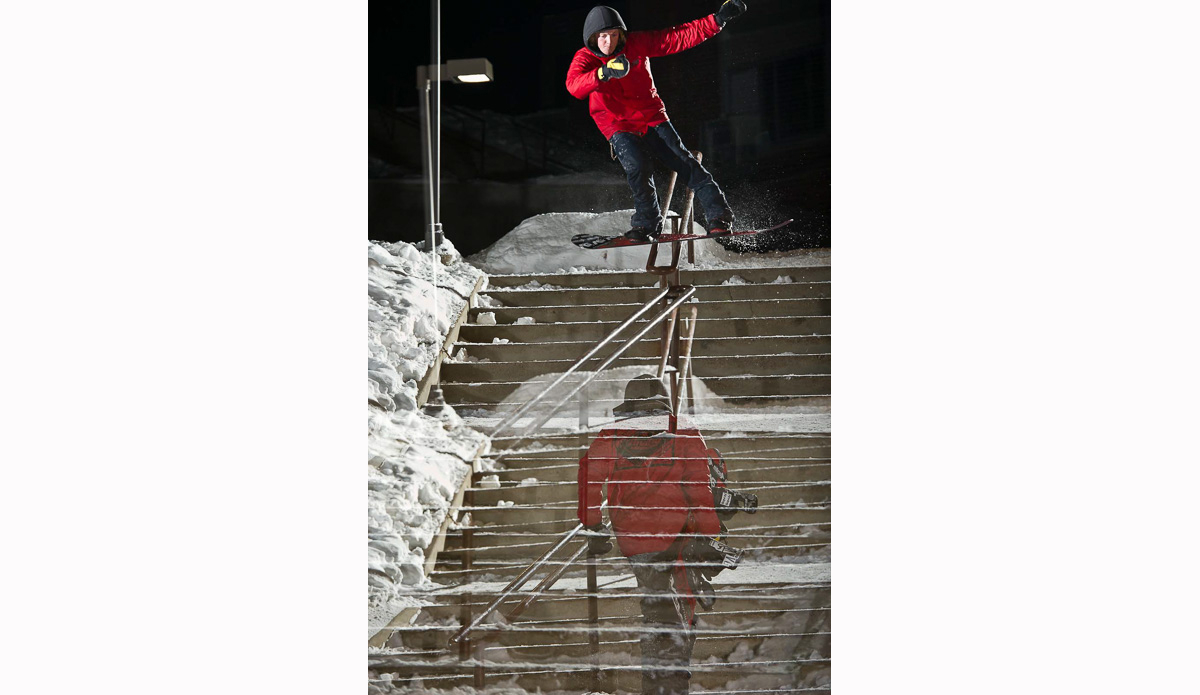 On a cold December evening in Minneapolis, Minnesota, our snowboarding crew located a ‘double bar gap double bar’ with a slight right posturing to deal with over two stair sets. I decided on a double exposure to coincide with the two handrails Alex Andrews would be dealing with while completing a ‘lipslide gap lipslide’ maneuver start to finish. The camera I was shooting with was the Nikon D3s, one of the first DSLR models to have a built in multi-exposure setting. After a few attempts, I wasn’t entirely satisfied with my double exposure capture, so I moved on to other angles. After the fact, Alex said he loved the photo and was stoked to have it in his collection, so it stayed in the keeper bin and I show it to you today. Photo: Blotto 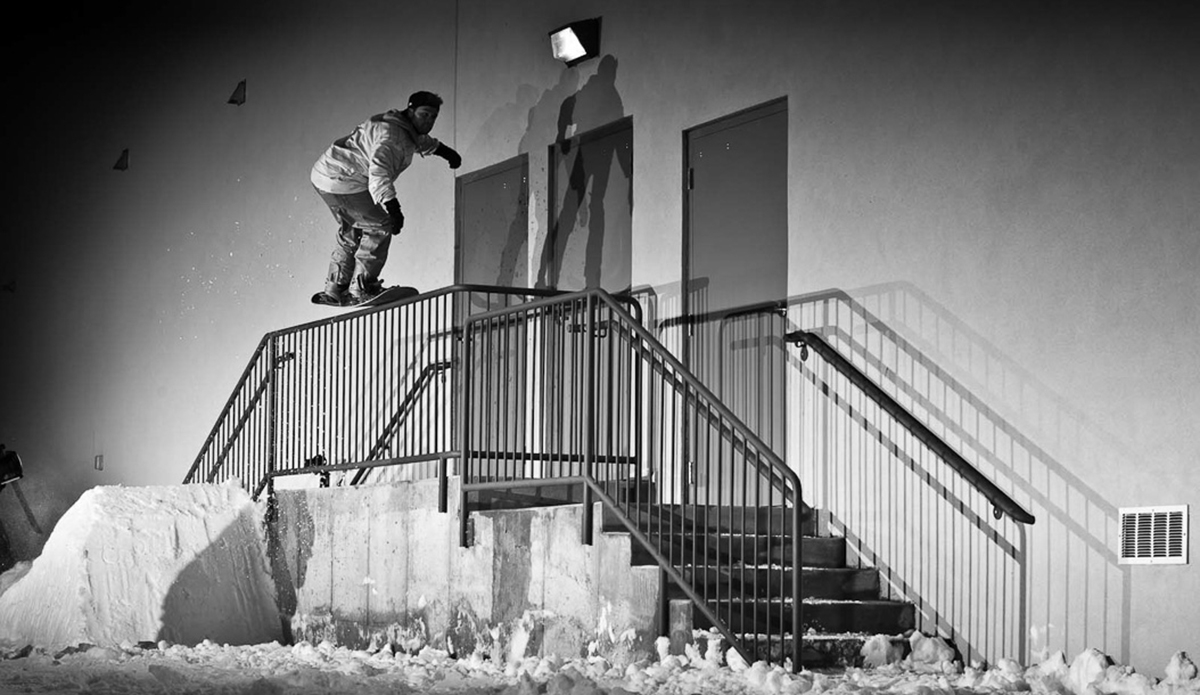 I find it quite entertaining, even after all of these years shooting in the streets; how snowboarders utilize every type of handrail that was designed and implemented in the name of public safety; for freestyle snowboarding. Take this standard set of stairs on the backside of a strip mall in Anchorage, Alaska, which is used on a daily basis for deliveries and cigarette breaks. For us, we see them hosting freestyle maneuvers in the wee-hours of the morning for guys like Ethan Deiss, who prefer a ‘nosepress fronside 270 to downbar’ to a Marlboro Light at 3pm. Photo: Blotto 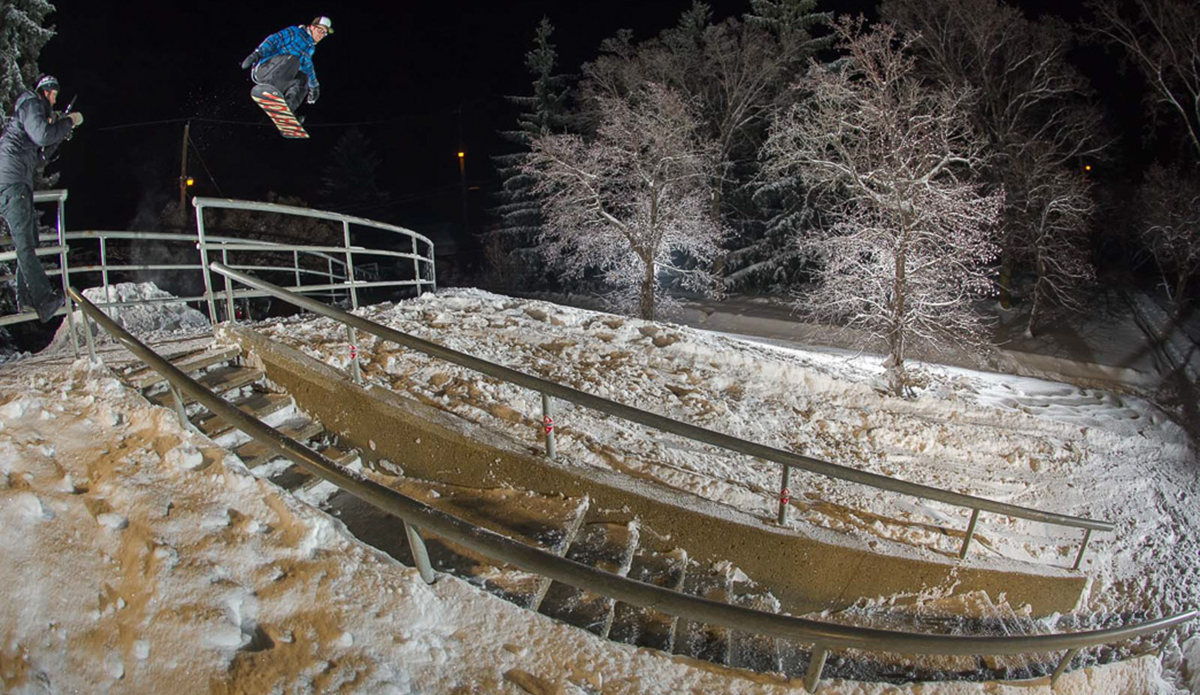 This chilly Edmonton evening had us working at a stair set that ran from a highway crossing bridge to a bus stop on a the street, a spot that provided the potential for a semi-technical ‘gap over to boardslide.’ The run-in was pitched slightly to the right while the rail was angled just to the left end-to-end. Under most circumstances, the takeoff is placed exactly in line with obstacle, so the snowboarder will have no problem locking in between the bindings while landing on the handrail centered, but there were numerous obstructions in the run-in that prevented a straight line into the rail. After a few scary moments shooting off in the wrong direction (into the stairs) on his initial attempts, Ethan figured how to commit his body just off kilter, land and ride away with a solid shot. Photo: Blotto 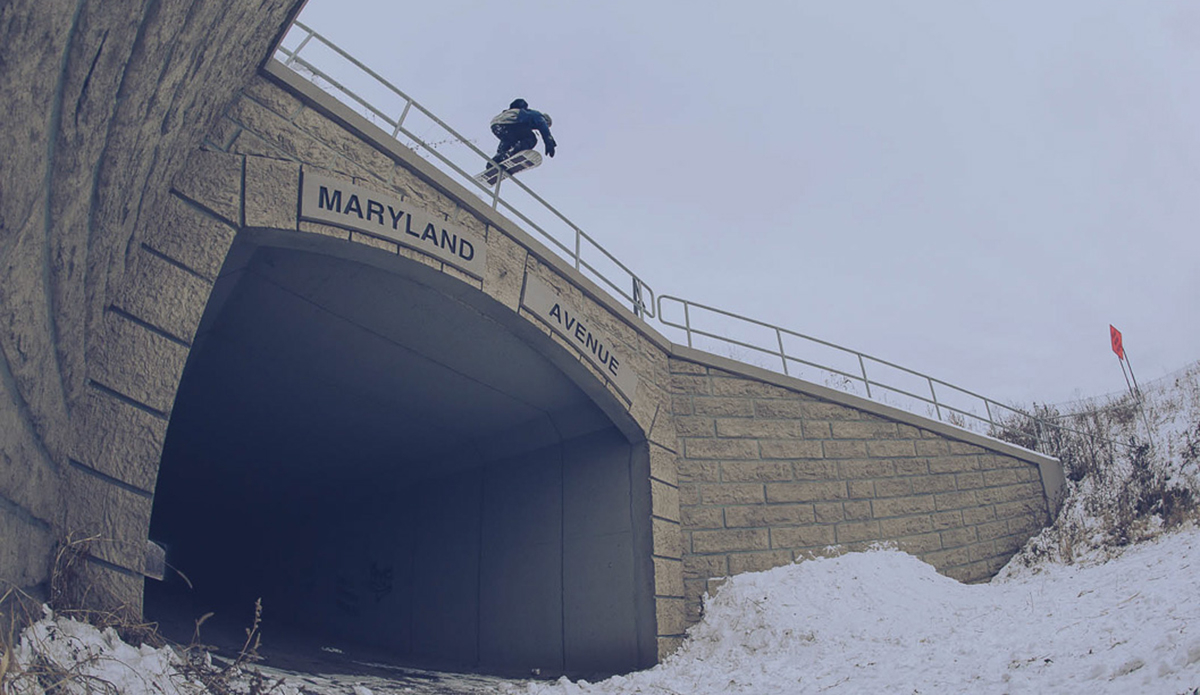 Over the past few winter’s snowboarders have become extremely creative in hitting one obstacle, landing on another and riding away in the opposite direction they started in, which is commonly referred to as a ‘redirect.’ The image you see here is one of these features, as Ethan Deiss snowboarded into the handrail he’s pictured on, slid between his bindings until the end of the rail, and then hopped off and landed on the vertical wall where you see the snow piled up. He completed the maneuver by riding down the wall and making his way into the flat bottom with the aid of the transition. The trick name would be known as a ‘boardslide pop-over wallride redirect,’ snowboarding that’s as technical as saying the trick name aloud. Photo: Blotto 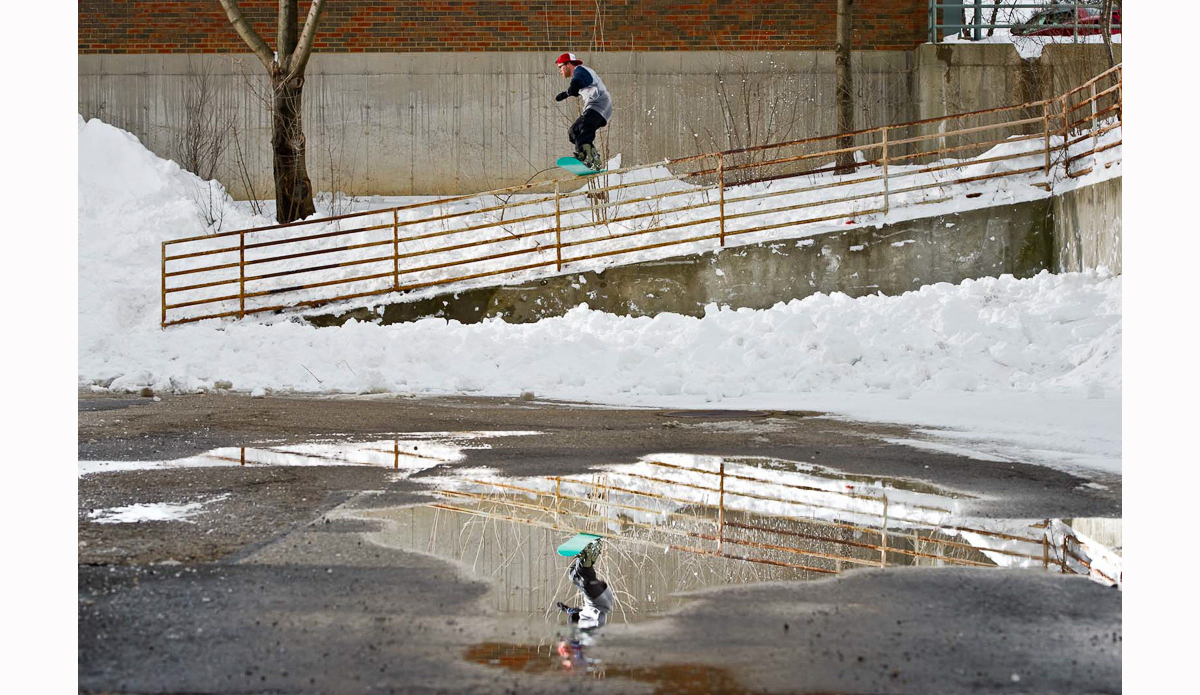 Reflection shots are hard to come by in the snowboard photography world because standing water usually means the temperatures are warming up and the snow is going away. Lucky for us, we found his location right after the temperatures climbed a solid 20-degrees over night, and just before the rain kicked in and melted all of the snow out within a few hours. Ethan took a liking to this straight bar, so he was happy to execute a few ‘lip slide 270’s’ for me, knowing good and well how hyped I was on some reflection value in this photo! Photo: Blotto 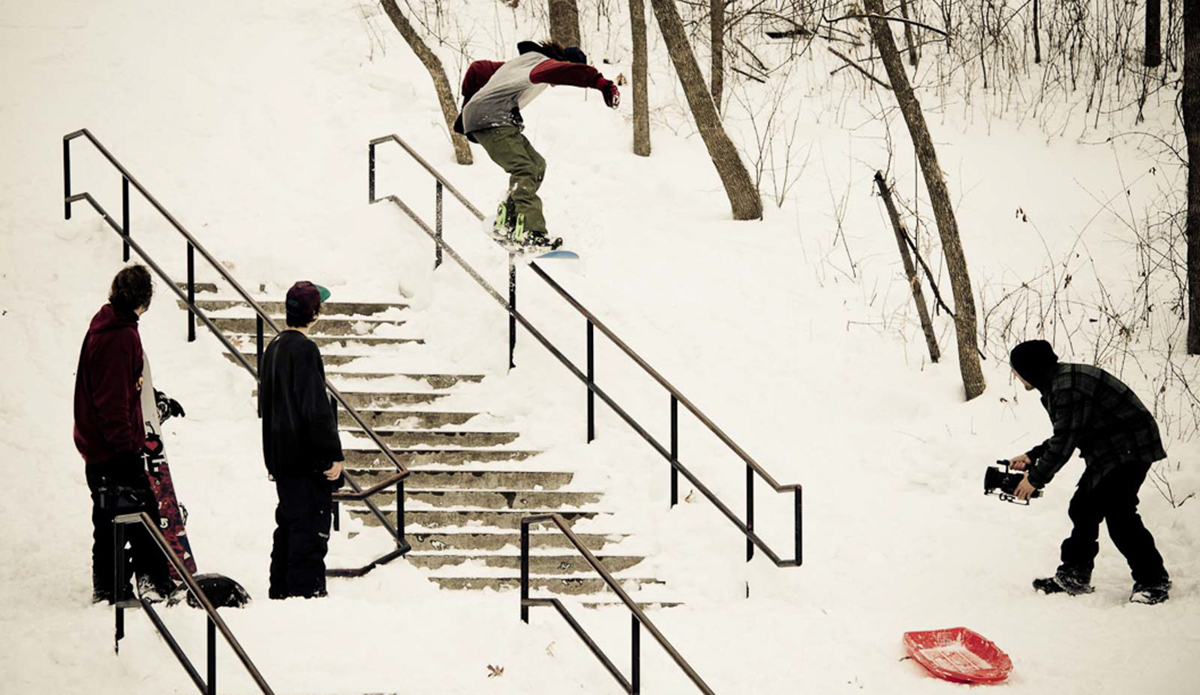 City parks often sit in an area that has a slight elevation change from one section to the other, hence why you see the masses out sledding during the winter season. It’s easy access to a good time and that speaks to snowboarders as well, as you see in this image. Grab some friends, bust out the digital camera, film a few clips, burn an afternoon learning and landing tricks like this ‘5-O backside 180 out’ by Forest Bailey. Photo: Blotto 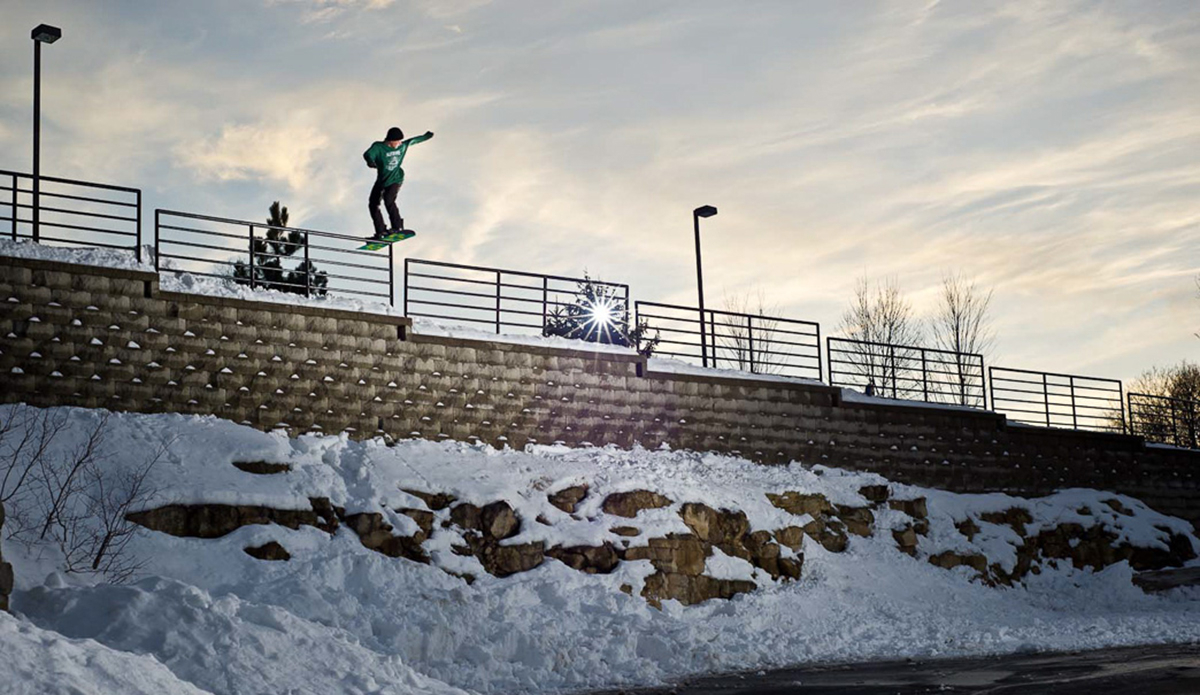 Not every snowboarding film clip was gathered in just a few tries, like this extremely technical ‘frontboard through three flats pop-out over the rocks to trannie finder.’ Sometimes the longer the trick name, the longer you’ll spend beating yourself up trying to get it perfect, which snowboarder Jake Kuzyk did at this Wisconsin spot. Eventually he came away with a perfect landing, making all the time, effort and frustration worth it. Photo: Blotto 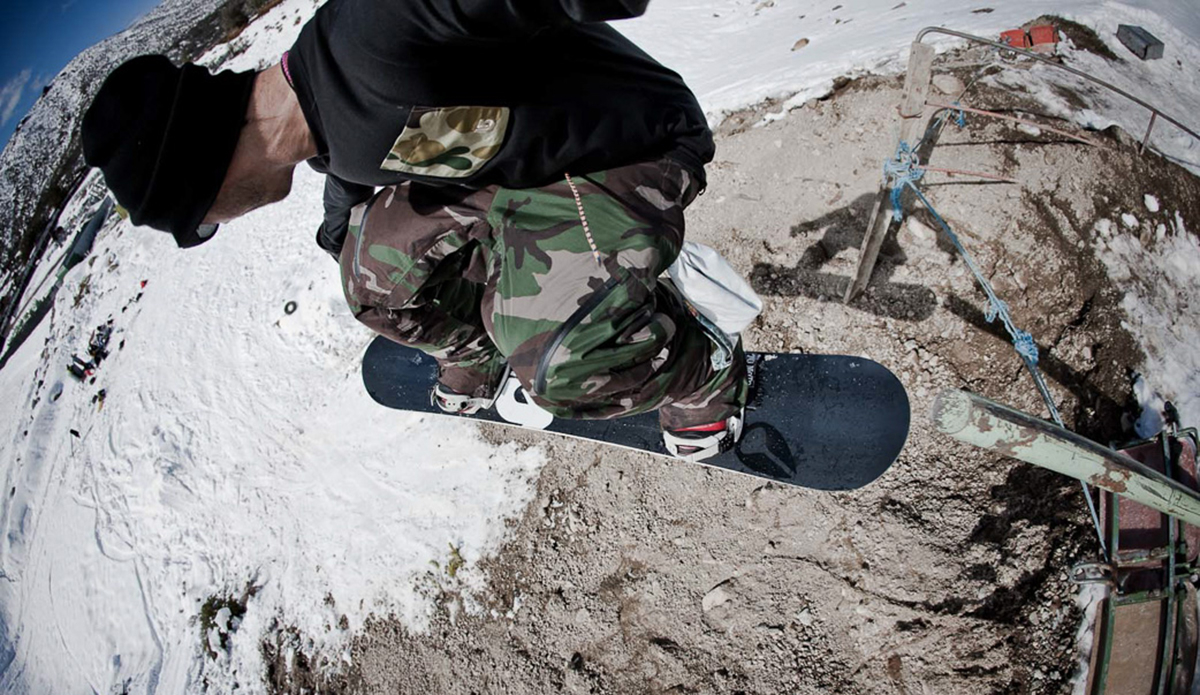 What started out as a powder day on the mountain turned into a snowboarding session at the Cerro Catedral (Argentina) Resort junkyard within a few hours. The morning was filled with powder turns and cliff drops on chairlift-accessed terrain, but Mother Nature decided to warm things up and convert the powder snow to sun bake stickiness, so we dropped elevation and kept ourselves busy being creative amongst piles of discarded ski resort supplies down low. Snowboarder Jeremy Jones grabbed my camera, dropped in and shot this photo of himself executing a ’50-50 to dirt gap,’ one of my favorite photos from the entire trip. Photo: Blotto 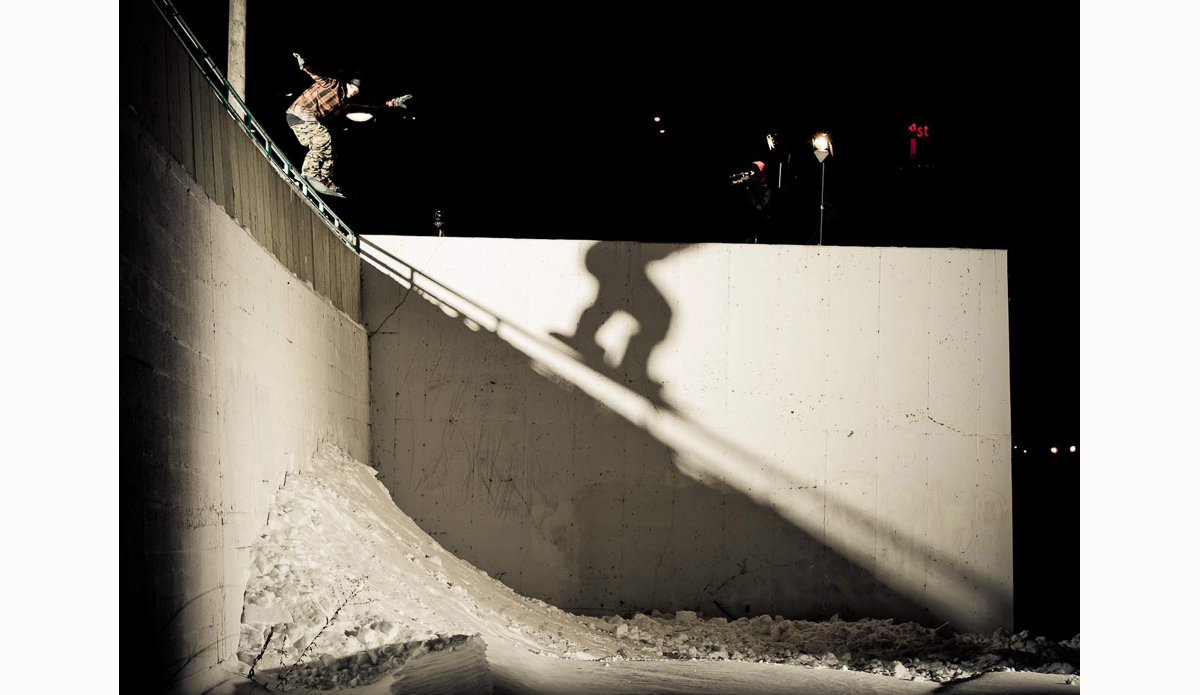 Locate a corner wall with top and bottom access, plenty of snow, maybe a handrail mixed in somewhere and you’re going to have endless opportunities for years to come. We visited this spot for five or six winters in a row, always coming up with something new, whether you started from the top and dropped in, or came from down below shot above the walls and reentered. You never knew what the guys would dream up, build and execute, but I always knew they’d be landing something super rad. On this evening JP Walker ‘switch nosepressed frontside 180’d in’ to get things started, the spark that had us coming back for multiple days in a row, leaving with a bag of shots every session. Photo: Blotto 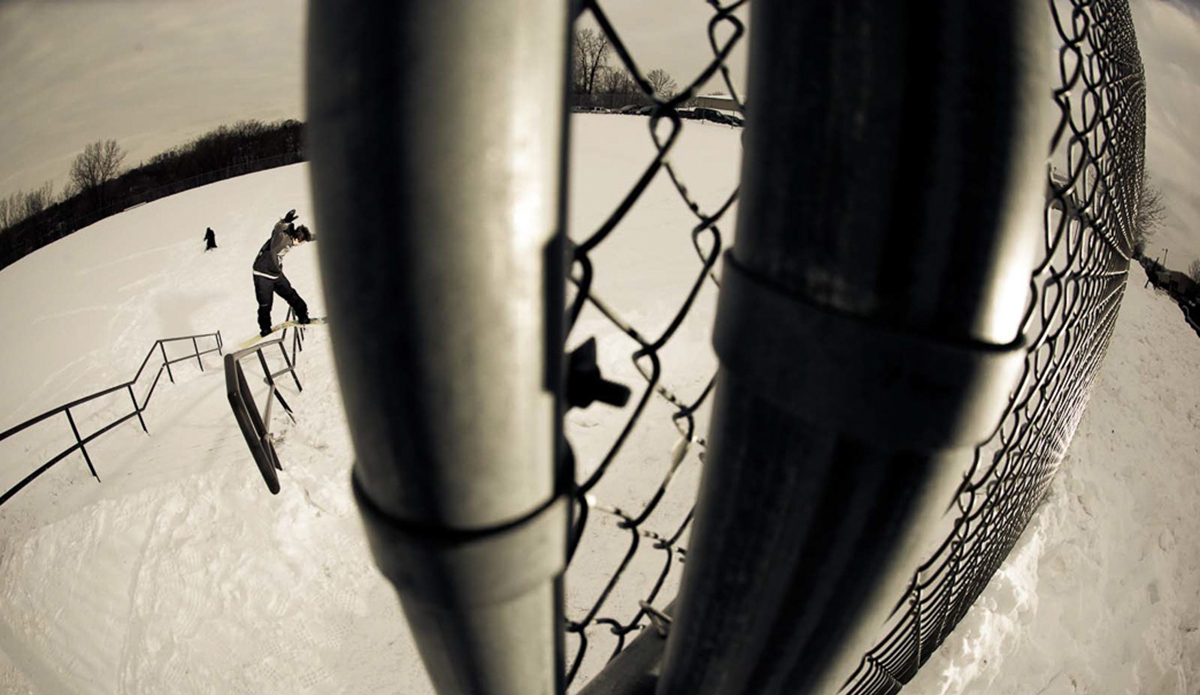 Here’s another legendary spot in the Midwest that has seen hundreds of different maneuvers go down over the course of time, a location that gets you a film clip or a feature that provides a healthy warm up to the day. Somewhere throughout the years the handrail on the right was bent by a large object, providing a small change in the design while throwing a small technical tweak the riders riding this handrail must deal with, as Keegan Valaika did with a smooth ‘cab 270 frontboard.’ Photo: Blotto 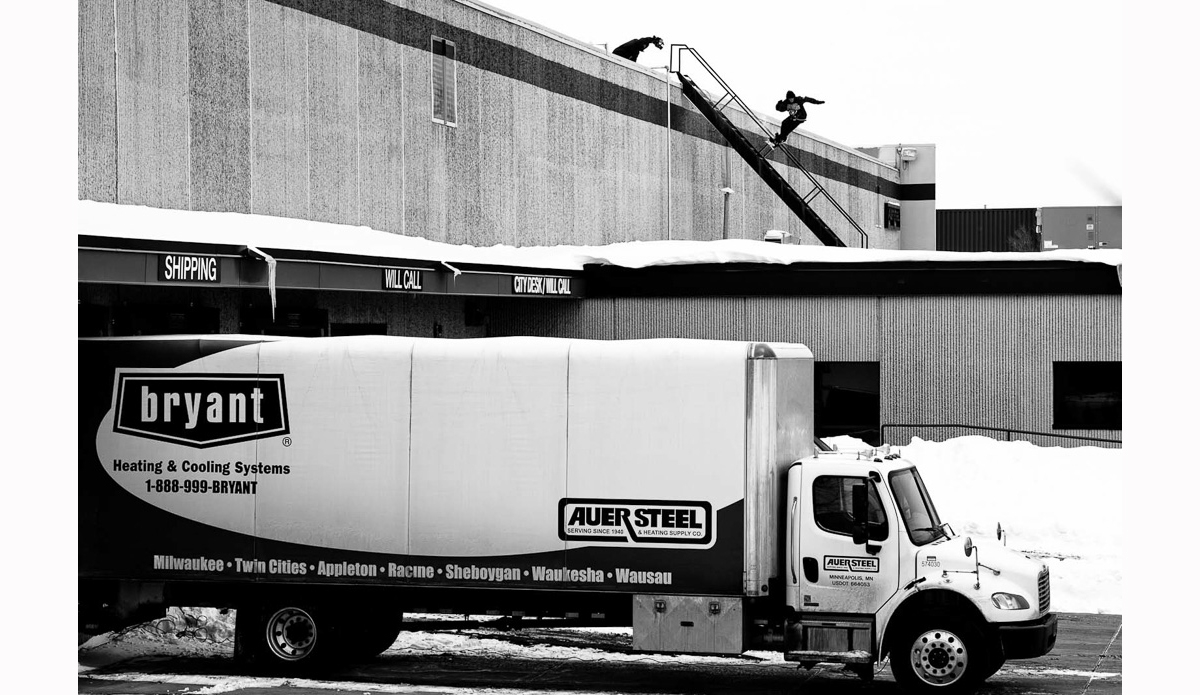 This snowboarding maneuver is commonly referred to as a ‘roof to roof frontside boardslide,’ with the ‘roof to roof ‘ text describing the handrail placement and ‘frontside boardslide’ labeling the trick. If you know snowboarding well, it’s understood that saying “roof to roof” actually means “that thing is steep!” That’s the nature of an exterior handrail on top of a building connecting two levels, so you don’t need a lot of speed going into it and it’s a real dodgy situation trying to land said maneuver because you exit with lots of speed and the flat comes up really quick, but it’s possible and Keegan had it dialed after a few tries. Photo: Blotto 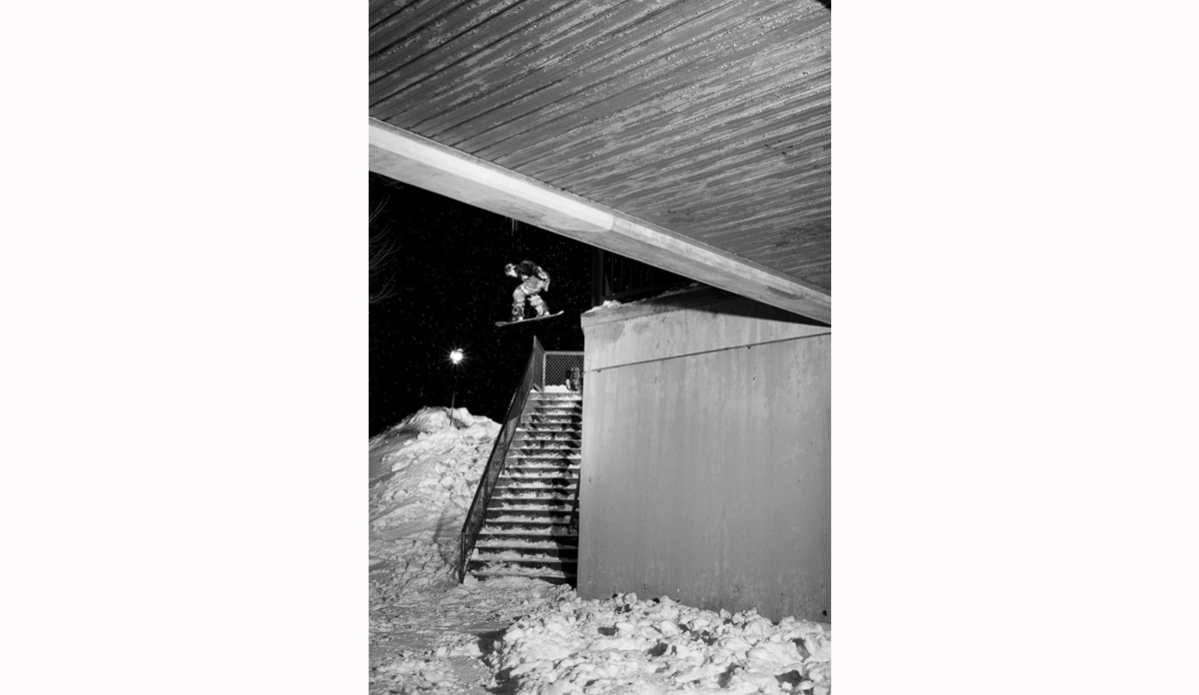 During this session with Zak Hale in Wisconsin, the Green Bay Packers were winning their first Superbowl with Aaron Rodgers calling plays as quarterback. I don’t think that was any type of motivation for Zak to land this ‘gap to front board,’ but it was kind of rad to hear the Superbowl on the rental car AM radio while shooting snowboarding. Photo: Blotto 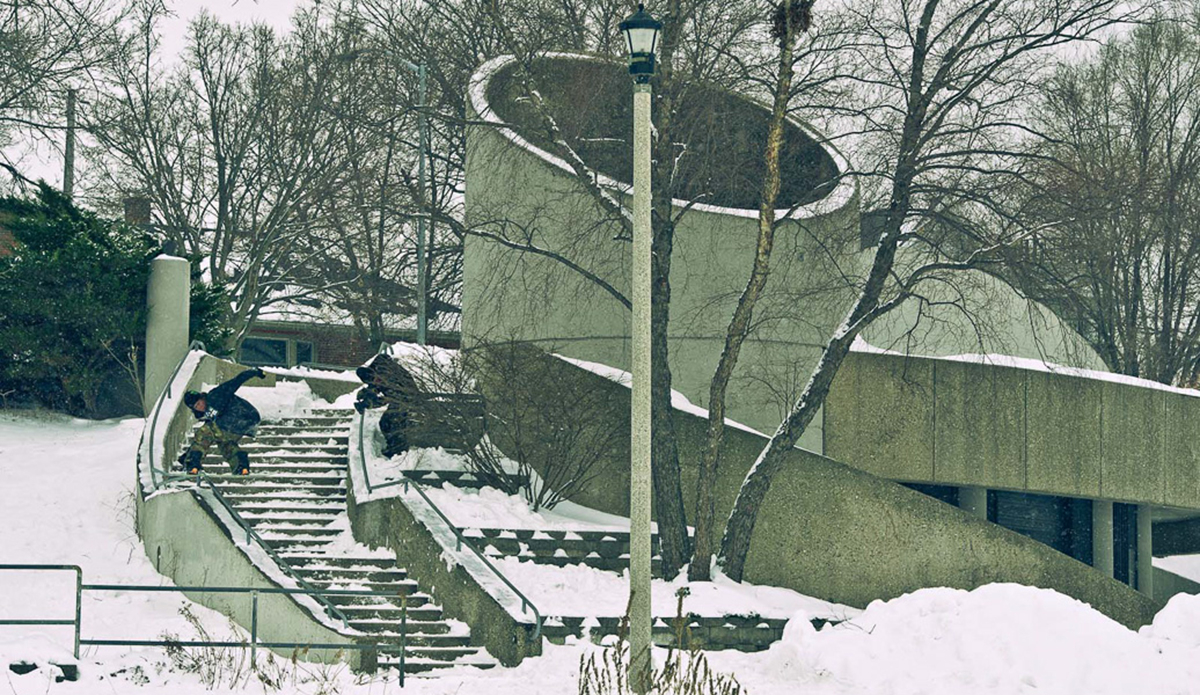 Street and terrain park snowboarding has come along way in the past few years, the hardest tricks in 2008 are now warm-up maneuvers in 2014. Take Zak Hale’s ‘front board through a curved kink’ picture here, this is not an easy thing to do on a snowboard, especially in the streets where the consequences are cold cement stairs. Guys like Zak are so good now they’ll start a session by hopping right into some gnarly stuff right outta the gate. The skill level and board control nowadays fascinates me on a daily basis, it’s never gets old. Photo: Blotto 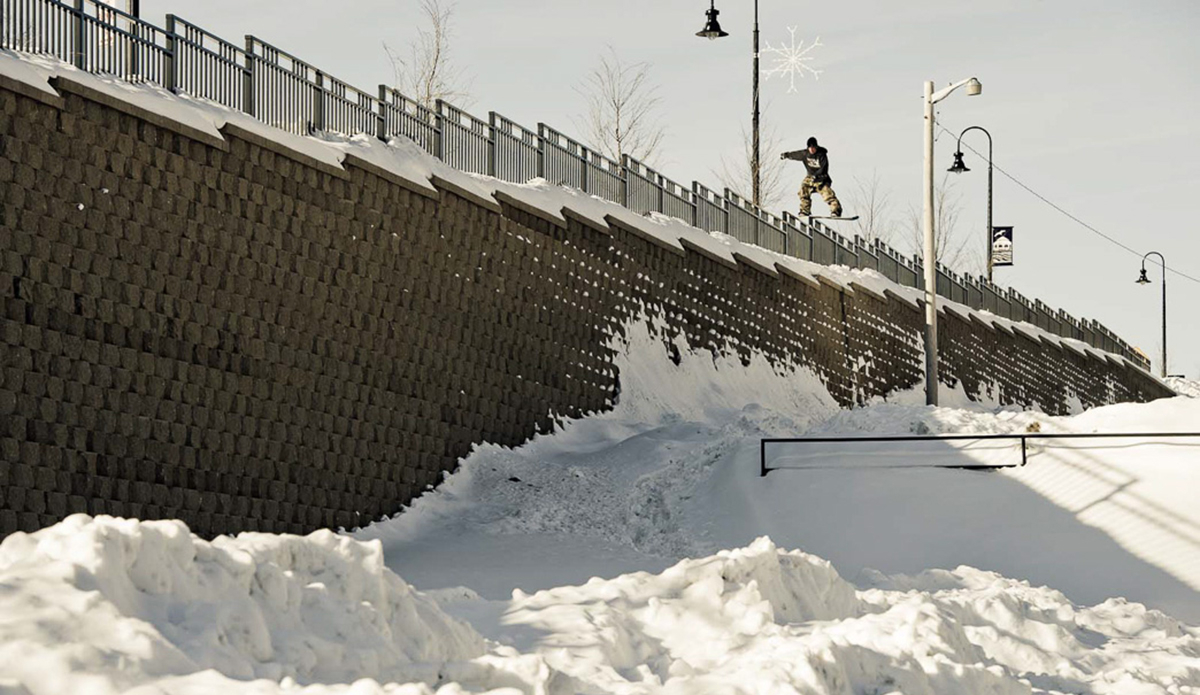 More technical wizardry by young buck Zak Hale as he ‘board slides three flats to 270 in transfer.’ On top of dealing with the run-in, trick and landing, Zak talked a security guard into letting us film this spot from some additional time to get a perfect shot. Kudos. Photo: Blotto

When an architect sets out in designing a building, city park, overpass, or any other structure that includes public safety devices, never did it cross their minds that these long metal bars called handrails — sometimes square, sometimes round — would fuel an entire niche within snowboarding while influencing terrain parks worldwide. The handrail, in its simplest form, is the classic down-bar, a piece of metal running straight down a set of stairs used for pedestrian stability, and perfect for enthusiastic snowboarders. It was the early street-riding pioneers taking what they knew from skateboarding and applying it to the snowboarding process during the winter months that fueled a revolution. It’s absolutely incredible where it’s gone from there and hopefully this gallery shows you a little bit of that.

As a bonus, I included the trick names with each image, because you’ll get a kick out of saying them aloud, whether you’re the seasoned snowboarding veteran or an innocent bystander taking note of these freestyle fanatics risky life and limb in the name of fun and filling up video parts. Enjoy.