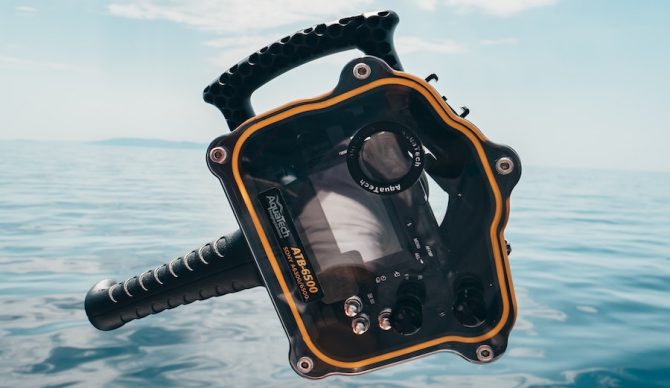 Ain’t no housing like an AquaTech housing… Photo: Oliver Sjostrom

So you’ve got the camera, you’ve figured out what lens you’re going to use, but you still need one (extremely important) item before hopping in the water. A waterproof camera housing. Your weather-sealed Nikon is in no way going to cut it, and neither is that $10 plastic bag on Amazon. Well, maybe it is, but I’m not going to trust my $1,000-plus piece of equipment to something that cheap.

That being said, nicer camera housings with interchangeable ports, full access to buttons, and all the bells and whistles can cost up into the $2,000-plus range. And unless your camera costs that much too, investing in such top-of-the-line equipment doesn’t have to be the way to go. There are plenty of high-quality and reliable options out there that won’t break the bank and are fully capable of keeping your camera dry – used properly of course. Not even a $2,000 housing is idiot-proof. As Brent Bielmann told me, “Always double check your fasteners. I double, triple check my fasteners while on land, and then check again right before getting in the water.” 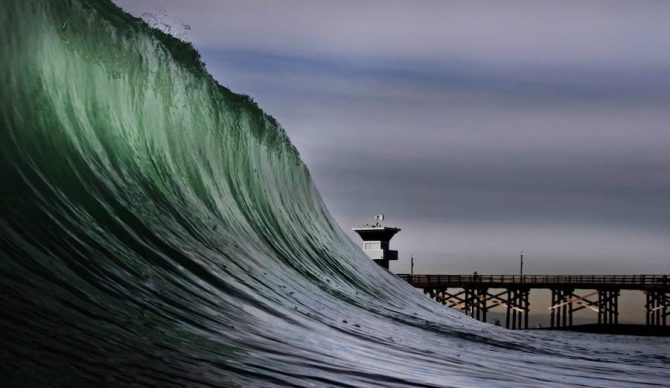 What are the Best Waterproof Camera Housings for Surf Photography? 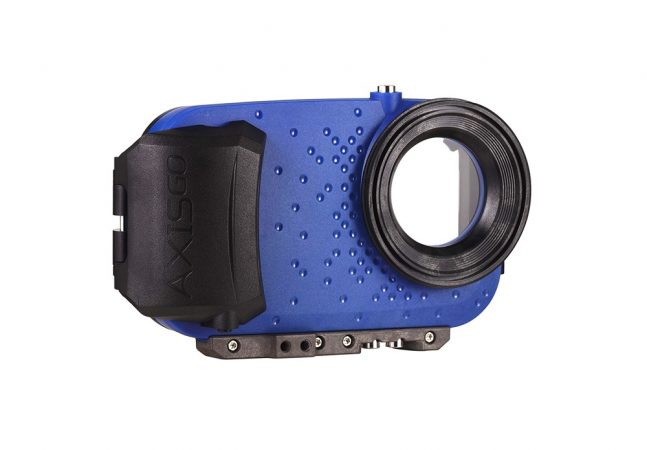 Pros:
– Easy in and out
– Made by industry-leading AquaTech
– Full touchscreen compatibility
– Great add-ons like a pistol grip and dome port for “fisheye” effect
Cons:
– Pricey for an iPhone housing, but well worth it

As mentioned in our Best Cameras for Surf Photography article, the AxisGo Water Housing is an incredible way to get your feet wet, even before you buy a “real” camera. That supercomputer in your pocket actually takes better photos than plenty of DSLR cameras on the market today, and is lighter and easier to use as you get comfortable in the water. And at the beginner level, chances are it’s your lack of experience, rather than your equipment, that will be the limiting factor, or rather the point of difference between you and Zak Noyle, who’s taken some incredible underwater shots with an iPhone and AxisGo Water Housing.

Check price on Amazon, or on B&H Photo. And for some awesome accessories to go with it, check out the Pistol Grip with Trigger, and the Dome Port. 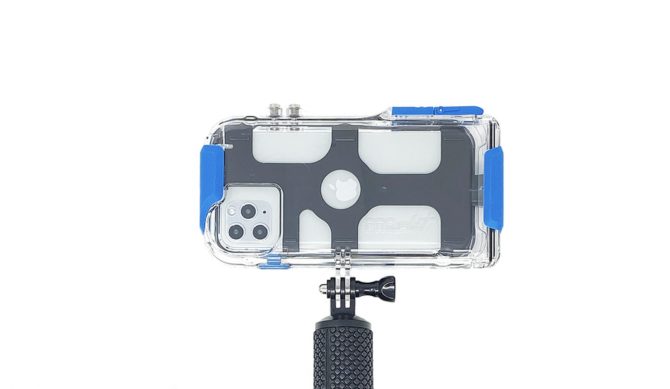 Proshot iPhone cases are sturdy and half the price of an AxisGo but lack the bells and whistles.

Pros:
– Cheaper than AxisGo but not poorly made
Cons:
– Pistol grip does not include trigger
– No full-touchscreen access (requires app)

Another great smartphone housing option are the ProShot cases. Not only are they less expensive than an AxisGo, but they are also compatible with any GoPro mount (and come with an included pistol grip). However, if you’ve got the money to spend, the AxisGo will provide a much more user-friendly and satisfying experience, as well as opportunities for upgrading.

Check the price on REI and Amazon. 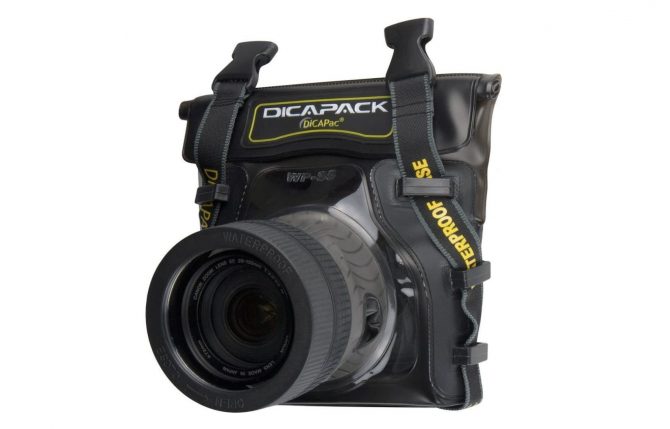 DiCAPac Waterproof Camera Housing is a cheap but effective option.

Pros:
– Cheap, like crazy cheap when you consider some housings can cost up to $3,000
Cons:
– Cheap isn’t necessarily what you want in a water housing

A few weeks ago in Santa Cruz, I was paddling back to the lineup when I saw a young, probably teenage, female photographer in the water with a squad of groms and what looked like a plastic bag over her camera. Curious, I paddled over and asked what it was. “I got it for like a hundred bucks on Amazon!” She practically yelled in my face (the waves were pumping and stoke levels were high that day). “The pictures look good and it hasn’t leaked yet!” I made a mental note of the brand, and looked them up when I got home. With 4/5 stars on Amazon after 153 reviews, there are plenty of people raving about it, and a few lamenting their ruined cameras after water leaked in. You get what you pay for, and for an $89 camera housing, I’d say just exercise caution and test the housing before taking your camera into the water with it. 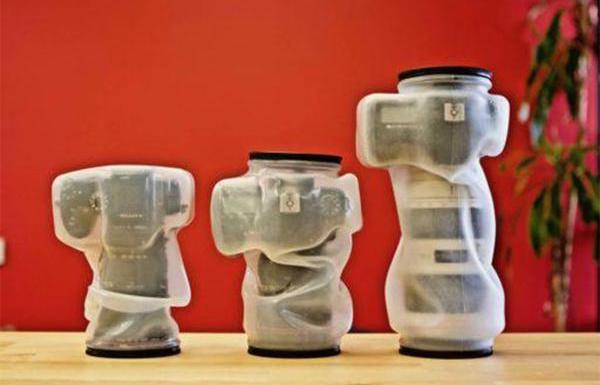 Outex’s soft housings are secure and pack down small for lightweight travel.

Pros:
– Entry model can be upgraded to Pro Model
– Glass port
– Plenty of add-ons like a Pistol Grip or Dome Ports
– Pro Model has rear optical glass for full use of screen and viewfinder
– Super lightweight and packable
Cons:
– Soft silicon body more prone to damage than a hard-shell housing
– Requires good post-session habits to keep clean and functioning
– Tricker handling than a hard-case with handles

Outex is a great budget option for the beginning photographer who wants something a bit more reliable than a sub-$100 Amazon item. The Inertia Films and award-winning cinematographer Jordyn Romero says: “I currently use an AquaTech, but I used to have an Outex housing and really liked it as an affordable option to start out on.” Her favorite aspects were that it gives you, “access to every button and dial because it’s a bag – you just need to know your camera well,” and that it “feels less sketchy than other cases at that price point.” However, she did note that without handles like an AquaTech housing, the “handling was tricky,” and that you “must have good post-shoot practices to clean every o-ring and part.”

As another vote for this soft-shelled alternative, world-renowned photographer Chris Burkard (featured in The Inertia‘s 2021 Evolve Summit) is a brand ambassador for Outex. Outex makes an entry level and a pro level kit, both with high-quality glass ports. The pro model has a rear optical port as well for full use of your camera’s screen and viewfinder, and the ability to attach dome ports, pistol grips, tripod mounts, and more.

Check the price on Amazon and B&H Photo. 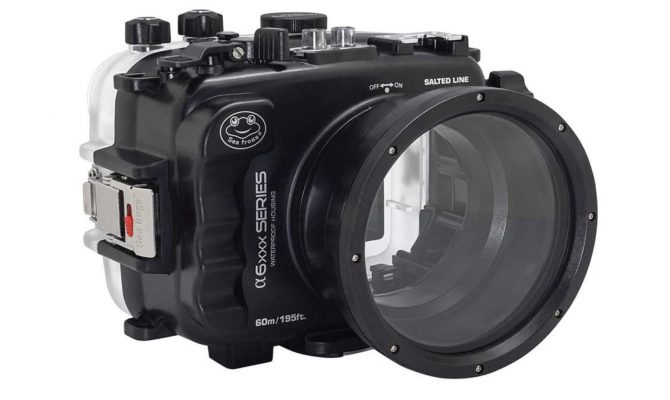 SeaFrogs Salted Line camera housings are a cheap but effective hard-shell housing that fits most cameras.

The Meikon/Sea Frogs water housings have made a bit of a name for themselves online as cheaper hard-case water housing alternatives to expensive brands such as SPL and AquaTech. They are constructed in Hong Kong (do what you will with that information). I have not used one myself or spoken with someone who has, but the housings have plenty of positive reviews and professional endorsements online leading me to believe that they are a very viable alternative to top-of-the-line equipment. They’re fully compatible with interchangeable ports, pistol grips, etc., and feature a built-in leak detector. The only downside to the design that I can see without getting my hands on it is the lack of a full-on side handle like those featured on AquaTech housings (instead there is a molded grip on the side). 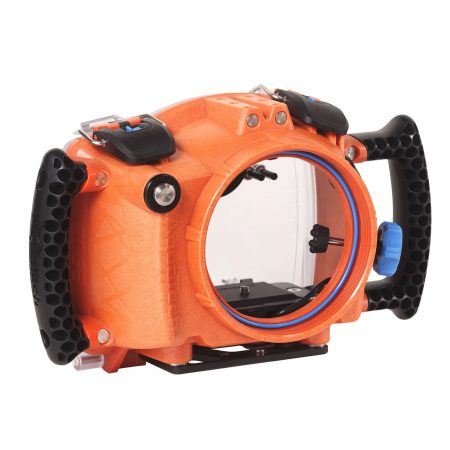 The AquaTech Edge is specifically made for the latest mirrorless cameras.

Pros:
– Industry leading, trusted by most pro photographers I spoke with
– System of clamps make camera in and out very easy
Cons:
– Clamps are easier to mess up than screw-down fasteners

Five of six professional photographers I spoke with use AquaTech, at least as far as my small sample-sized field results go. Todd Glaser, Zak Noyle, Sarah Lee, Brent Bielmann and Jordyn Romero use AquaTech, the lone non-conformist being Morgan Maassen, who uses SPL (below).

Brent: “I’ve been fortunate to be sponsored by just about every water housing company at some point, and I’ve settled on AquaTech because I found their gear to be really well made and it suits my style… For example, I’ll often put my camera in the housing and then realize, ‘shoot!’ I want the focus point over here actually. And with AquaTech’s system of quick release clamps I just pop four clamps open and boom, I’ve got my camera out!”

Todd: “One thing I love about my AquaTech housings is that all the ports are interchangeable with different body sizes. I always travel with two water housings, so instead of having to take duplicate ports for each housing, I can bring just one set of ports.”

AquaTech housings come in a few different varieties for different camera types. The EVO series fits the Canon 1DX line only (after all it is the industry-leading professional action camera), and costs $2,000. The EDGE series is for the latest mirrorless cameras from Canon, Sony, Nikon, Fujifilm and others, and costs around $1,000-1,700 ($1,000 for the base model, and $1,700 for all the bells and whistles). The Reflex housings are the cheapest among AquaTech’s selection, made for medium-sized DSLRs from Nikon, Canon, and Hasselblad, and cost around $1,000-1,600. 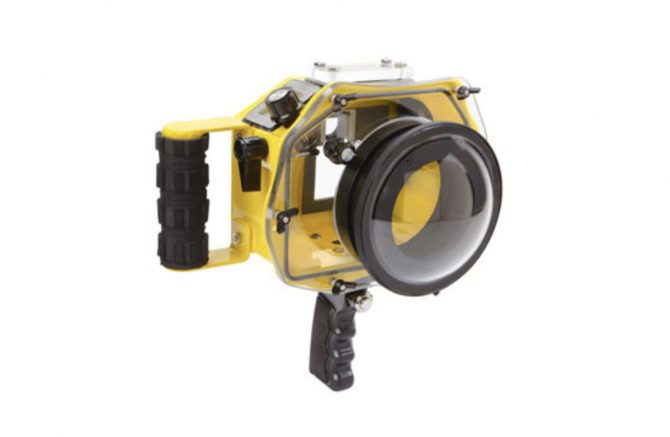 SPL Waterhousings are custom-made to your specifications.

Pros:
– Custom built means you get to choose what bells and whistles matter to you
– Very secure system of screws to close housing. Hard to mess up
Cons:
– Just like a custom-built board, you can’t buy a custom-built camera housing off the shelf.
– System of screws takes time to screw down
-Buy a new camera and you’re going to need a new housing

To be honest I haven’t heard a ton about SPL Water Housings, except that Morgan Maassen uses them to capture his stunning photography. They use butterfly screw-down fasteners instead of a system of clamps like AquaTech. It looks like SPL’s system could be more secure/harder to screw up (pun intended) but they do look like a bit of a pain as far as taking the camera in and out goes.

What Kind of Camera Housing Should I Buy?

Well, that all depends on what you want to do with it. If you’re hoping to capture award-winning shots, at the very least choose something like the Outex housing that makes use of glass ports for better image quality. If you’re seriously just trying to get in the water for the first time, maybe try out the AxisGo water housing, or one of the other million-and-one smartphone photography housings available online.

Are the Extra Buttons on a Higher-End Housing Worth It?

Once again, I’d say it depends. If you go with a housing like AquaTech with quick-release clamps, I’d say it matters less. But if you’re a photographer who likes to have a lot of manual control over what’s going on with their camera settings (even when in the water), then yes, I’d say it’s worth it. That being said, if you’re still mostly shooting with fully automatic settings, maybe you don’t need it. One case where I would definitely go with as many buttons as you can would be housings with screw-down closure systems which make it an absolute pain to take your camera in and out of the housing.