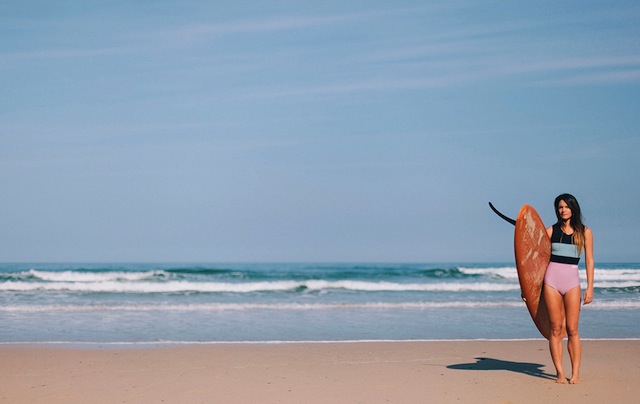 Breaking free from the norm, neon wetsuits was born from the love of surfing, design, colour and doing things the way founder Elsie, wanted to do them. Photo: Neon Wetsuits

Elise Pinniger has created a British brand of high performance made-to-order neoprene wetsuits. Life envy ensues, as Pinniger’s studio over looks the ocean in Newquay, Cornwall in the Southwest coast of England. After being frustrated with the lack of women-designed wetsuits, Pinniger started experimenting with color and pattern. She created Neon, which has a type of uniqueness and style that women are drawn to. All of Neon’s wetsuits are made to order in a studio on the Cornish coast, keeping the manufacturing in house.

Due to the growing demand of stylish but functional wetsuits, Neon has been picking up in popularity, becoming well known for their signature color and cut. Before Pinniger started making her own wetsuits, she worked with Bodyline and Repairs in Newquay, learning the craft.

Neon consists of high wasted surf bikini pants and tops, sleeveless and long sleeved wetsuits and swimsuits for women and long john suits and vests for men. All the suits are made from neoprene with functionality and performance in mind. The suits are made to protect against bruised hips and ribs from your board. Pinniger started surfing when she was thirteen and has been hooked ever since. Her wetsuits display her dedication and understanding of the sport.

Along with the unique designs, each piece is fully color customizable at the online store and can be shipped internationally. Surfers are able to pick the design they like and then play around with the different color combinations.

And here’s a video Elsie made in her studio for a Woking Artisans’ Club story with Huck Magazine.