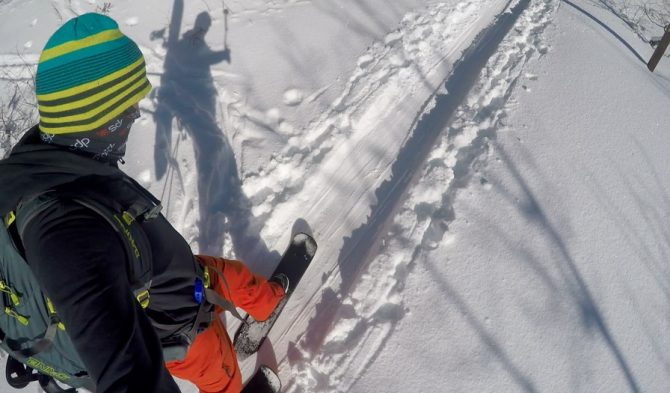 It’s all about the glide. Photos and video by JC

If you ride a snowboard and have any affinity at all for using it in the backcountry, trying to find a less-expensive solution than dropping a couple grand on a splitboard can be like stepping back in time at least a decade.

When I told a friend I was looking at approach skis for access he laughed and told me our snowboarding compadres dealt with this struggle in 2005.

It’s true. And I’ve tried more than a couple versions of the approach system—small skis that allow for touring and most importantly “glide,” unlike snowshoes, and can be strapped to a pack for the downhill. But quietly, there have been companies working on the problem. Like Drift Boards, that created the newest version of an approach system that might have solved several conundrums at once.

I was able to commandeer a pair from the good people at Drift. Here are the deets: the boards (or snowshoes, or skis, it’s a mix) are handmade in Salt Lake City using carbon fiber so they’re super light (four pounds, according to Drift). They’re 35 inches long and 6.75 inches wide and covered tip to tail in a hardy skin—synthetic mohair that allows for climbing uphill while still allowing for glide, an important element in the backcountry.

The Drift system is as simple as a snowshoe to put on. But again, glide is so essential when touring: allowing one foot to slide in front of the other is exponentially-more efficient than the clomp, clomp of snowshoes. In deeper snow, ‘shoes’ also collect snow as you step up and down. Plus, most versions have a crampon-like device underneath that makes the glide impossible. With the Drift, you still get that glide, you can break trail for partners with skis or splits and you can benefit from a trail that’s already broken (and not ruin it like you would with snowshoes). Key to the Drift system is the binding/heel lift relationship.

I used a pair of approach skis for some time that was made by Karhu back in the day. But the binding was uber-flimsy and the skis lacked heel lifters, which put extreme pressure on said bindings. Heel lifters are basically some form of metal underneath the heel of the boot that can be lifted or laid flat, depending on the terrain. If it’s steep, you want the heel lift in full upright mode, which takes stress off the bindings. Drift has engineered this to perfection. Basically, you want as little heel movement as possible so you aren’t stressing the binding system. 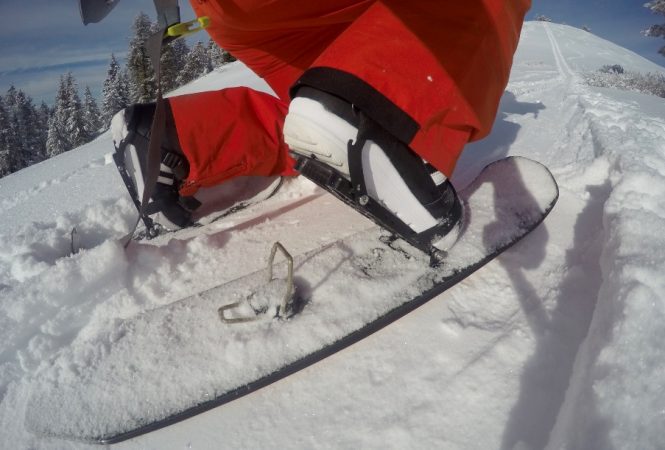 When it’s steep, the heel lift is in the most upright position, lessening wear on the binding.

As I mentioned, Drift definitely figured out the binding part, with a stainless steel heel plate and simple straps that run over the high ankle and toe of the boot and combine with a heel clamp. While I wonder about the durability of those straps over the long haul, the heel plate is bomber and the straps look replaceable.

Drift also covers the ski tip to tail in a skin, which is another important aspect to understand: approach skis of yesteryear—for reasons I don’t entirely understand–would only cover the ski in a half skin with the edges exposed, so if it got steep you’d be slipping all over the trail. Not the case here. The tip-to-tail, edge-to-edge skin insures you won’t slip (most of the time). When you’re ready to ride, they can be manipulated several different ways to carry on a pack (I clamped them together, skin against skin, to strap them to mine) and the changeover is a lot faster than a splitboard, no doubt. 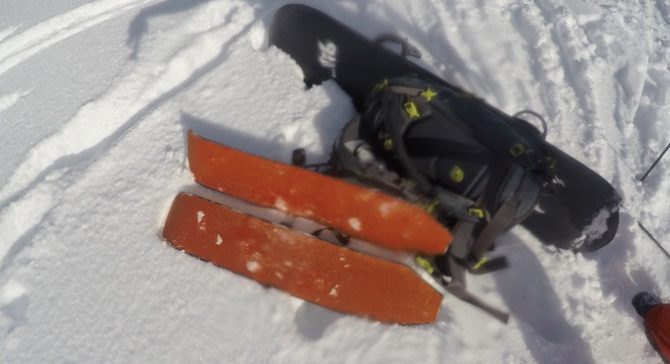 Here are my (rather minor) concerns with the Drift system: long touring on flat ground might get cumbersome, as would long traverses—or sidehilling–out of deep drainages where you’d need to be on the edge of the ski for long periods. Admittedly, those are situations you’d like to avoid with any system. But the best scenario would be to step out of the car, or off the lift and out a gate, and start gaining the vertical you’re going to ride. Secondly, the binding straps: they’re really lightweight. Would they wear well over time?

Drift is undoubtedly on to something with these, and not just for people who want to ride downhill (obviously, folks agree with me as Drift easily made its fundraising goal on Kickstarter). The Drift Boards are 1,000-times more efficient than snowshoes so I see the rec market as the company’s oyster. Plus in search-and-rescue situations, they would be easy to use and attach to a backpack when not needed.

Verdict? Drift might have just solved a problem more than a decade in the making.

Editor’s Note: Riding in the backcountry is one of life’s true gifts but it is inherently dangerous and requires a combination of common sense and study to do so safely. Use the proper equipment, travel with knowledgeable partners, take a class, and stay safe out there.