Speaking of @bigdeluxe_ here’s a little sniper he made with @libtechnologies on board the #libxlost #PuddleFish easily my favorite all time performance fish, and now available in the strongest, most eco minded, production construction in the world….Sizes for everyone, all #MadeInUSA🇺🇸

There’s little argument over the fact that Matt Biolos knows high-performance surfboards. For years he’s shaped sticks for pro’s pros, like Kolohe Andino and Carissa Moore, and helped develop burgeoning legends like Griffin Colapinto and Caroline Marks with his design prowess (to drop one or three names). All while sculpting his art just across the San Clemente back alley from Timmy Patterson and other high-performance gurus of his generation. But Biolos has always been one step ahead, creating potato chip magic under the feet of some of the best surfers on the planet.  And they get to ride some of Earth’s best waves while vying for the takeoff spot with only three other people out.

But with all that attention paid to the elite, it’s nice to know that Biolos thinks of the other 99 percent of us, too. Us schmucks just trying to catch a couple at our local as swarms gather around that one, teeny, tiny takeoff. Maybe we get lucky, stroke into a couple and fly down the line with a tremendous amount of speed we’re not quite sure what to do with and do something kind of okay (25 percent of the time).

This describes my surfing in a nutshell: pretty okay. And that’s why I’m glad Biolos made the Puddle Fish (and I’m pretty sure 99 percent of you will agree with me). I beat the hell out of this performance fish to make sure I had it dialed under my sprinkly little toes: I got sessions at small, crumbly Trestles then at South LA County’s favorite beach break, and a couple more at a pier or two you’ve probably been to as well. Then, for kicks and a mere $50 bucks, I wrapped it up and shipped it via FedEx to Missoula, Montana, where I was visiting my dentist brother-in-law to get work on my choppers. I beat it up on a couple of river waves in Montana and Idaho as the numbness in my mouth wore off (nothing tests material like river currents and sharp rocks). It was pretty much a one-board quiver: easy (I mean really easy) to paddle, zippy (it’s fun for guys like me to turn) and durable.

Even when it’s teeny-tiny, it’s hard not to love this place. #trestles #thankyoulife

If you know anything at all about Biolos’ work, you’d know he’s continually tinkering with his tried and true shapes. From the Driver series (which I’ve owned one or two in my time) to the Rocket line–adding narrower tails, carbon wraps, volume in the noses, channels; constantly finding things to create new sensations. And you can tell he generally loves doing it: “Basically the new models tend to be somewhat spin-offs of something I’m riding (and) want more out of.”

So the Puddle Fish is his latest tweak of the wave-catching classic, the Puddle Jumper–nearly a longboard wrapped up in a short(ish) board outline. I’ve paddled the 5’5” Puddle Jumper plenty. It’s great for mushy waves. But turns and more aggressive maneuvers are done in slow motion on the Jumper. Enter the Puddle Fish, literally a fish outline with a wide, “inverted” swallowtail. At 6-foot, 190 pounds, I used the 5’6” Puddle Fish in complete comfort. The board’s tweaks are fairly obvious compared to the Jumper: the tail, as mentioned, and a change in volume/size configuration (the Puddle Jumper went 5’5” with 30.5 liters, the Puddle Fish goes 5’4”, 28.5 liters and comes in equal-length increments), and a full release channel in the tail.

This is an actual river wave, right after it crashed. Pretty crazy the way it mimics the ocean. Not sure what I was doing there other than maybe paying homage. #lochsa #thankyoulife

The release channel, to me, provided the biggest difference. The board paddled like a dream (I could have probably used the 5’4”) but the channels made the board feel longer than its length (see faster), and a little stiffer, which I liked because I could still feel flex on bottom turns and such. MB also said that he eliminated some of the drift associated with fishy shapes but I feel like drift is more a function of a surfer’s aggression and fin placement, which, BTW, the Puddle Fish features a five box. So again, without claiming too much, this thing surfed really well for me, was easy to turn thanks to a narrower outline, and get top to bottom with on occasion. And it still paddled well when the waves were s***.

The fin box’s fit FCS but they’re proprietary to Lib Tech. I hit up Lib’s Mike Olson about that particular feature (not using FCS2s) and he said it was three-fold: first is weight. FCS2s are 80 percent heavier, according to Olson, second, Lib’s boxes allow for fore and aft adjustment of fins. It’s not a lot of room to move fins (about a half-inch) but you can further tweak your setup and third, the FCS2 boxes just don’t work with Lib’s manufacturing techniques. I actually am not a huge fan of the click system with fins as they’re so hard to get out, I feel like I’m going to ding the board every time I remove them (and have, on occasion). 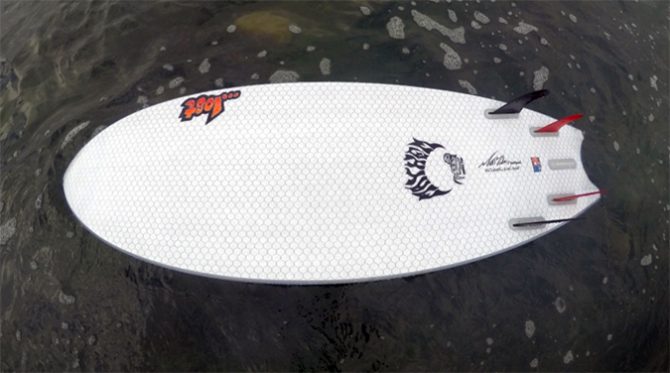 Which brings us to material. Count me as a screaming, little fanboy of Lib Tech. They’re one of the few companies manufacturing the toys we love in an environmentally-friendly way right here in the ‘ol U.S. of A. (outside of Seattle). Biolos is longtime friends with Olson and Lib’s Pete Saari and has manufactured his line of Mayhem snowboards through Lib Tech for a while now (which are super fun to ride, too, BTW). “It helps me compete with the bulletproof market,” Biolos told me late last year. “The bitchin’ thing—and I don’t think Lib Tech gets enough credit for this—is that they’re all made in America and are far more eco-friendly than anything out there.”

True, if you have an ounce of enviro-consciousness in that noggin of yours, you can actually feel good riding a Lib Tech board (see more, here). Plus, you’re going to pay good money to (hopefully) cut down your quiver a bit, and this thing’ll last a long time (your kids might ride it). Despite shipping it across half the country, beating it up on river rocks, smacking it against a pier on a mistimed backhand turn, it didn’t show a ton of wear. There was the minimal glass-crack but seriously, not much.

I love boards that simplify my collection and are bombproof. I now ride this fish, a pintail for scary (on occasion) beach break, and a longboard for fun when it’s six inches and reeling (ha!). So the Puddle Fish could pretty much be an everyday board. And a damn good one at that. Bravo Biolos!