I Tested This Bindingless Powdersurfing Board and It Was Amazing

@jeremyjensen_ #popping and #slashing his way back to the @mustangpowder #snowcat. Spraying your buddies at the bottom is always a tough one to resist.

Trying something new can be weird. You’ve got to be okay with the insecurity of it all—unafraid to look kinda kooky for a minute. Or you have to sneak away in the dark of night to try and get better at said endeavor.

That’s what I did when testing out this new(ish) phenomenon in snow riding: bindingless powderboards, ridden using only the boots on your feet. And at the forefront of this movement is Jeremy Jensen, of Grassroots Powdersurfing. Jensen has spent the better part of two decades developing his boards out of his garage in Logan, Utah and, while there are other versions and practitioners out there, he has literally helped create a mini-movement. How do you know you’re starting to get mainstream attention? Jensen landed a segment in this year’s Warren Miller flick:

Here’s why this sport is growing: there’s nothing in snowsports more pure than riding powder and Jensen has taken that aspect of the mountains and bottled it up into straight goodness with his Powdersurfing boards. As those of us who love powder know, one needs very little to ride dry snow other than momentum and body awareness. Put simply, you just don’t need to move that much when riding powder and you really don’t need bindings.

Still, Powdersurfing boards take getting used to. That’s why I snuck up to the local hill—which had yet to open—at the crack of dawn to hike and work on riding these rad little boards. I’ll definitely try editing a crash reel because I took many an epic digger. They’re called Powdersurfing boards for a reason: you want to avoid hardpack at all costs. The deeper the snow, the better. You need a steeper aspect and once you realize that speed is your friend, the board becomes really simple to ride. 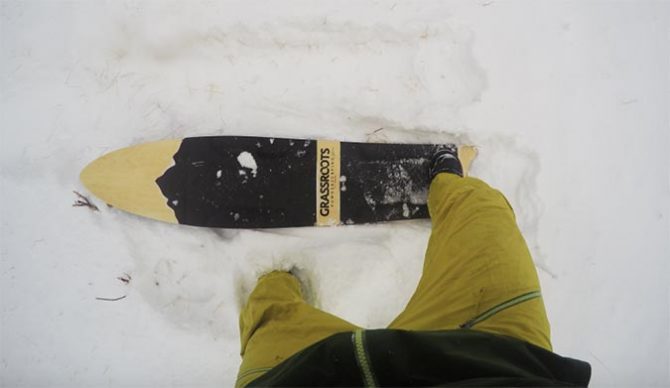 And the construction is bomber: I rode the Barracuda with a “long drawn-out nose,” that creates incredible float. And it can power through different snow conditions. Jensen uses birch and maple to make these beauties (and can get more exotic wood, too) and all his materials are sourced locally. The top, where you put your feet, is covered in a rubber stomp pad from the tail to the upper nose of the board that is really sticky (banging snow off the board becomes habit).

The base is a lot like a snowboard but utilizes a technology Jensen calls the “CDC 3-D Base.” This particular model is for directional riding (you’re generally staying in your natural stance). Jensen has taken surf concepts and woven it into his bases for flotation, speed, and control. One other notable aspect here is the weight. The Barracuda is so damn light and easy to move around, you can tell that years of tinkering has gone into its design.

First session, flailing with the dog:

Here’s where Powdersurfing works best: you need a place where you can boot pack up a nice slope and as you get better, you’ll want that slope to have more vertical feet. A car shuttle on a mountain pass would be perfect or a place where you can step off a lift, exit a gate and ride down to a road to catch a shuttle (you don’t want to traverse much with these until you improve). I’m seriously trying to figure out how to make this my main touring setup this winter (Grassroots actually offers a splitboard) because they’re so light (between five and 10 pounds).

Other than finding the perfect slope, there’s very little disadvantage to having one in your quiver—they can be used in the neighborhood if you live in snowbound regions or on little pockets of pow near your favorite resorts. It’s a fun, lightweight tool that mimics the feeling of riding a wave as well as anything you’ll use on snow.