Editor’s Note: The feature is sponsored by our friends at Roamers

Joey Carnera is an extremely talented skater, surfer, and ambassador of good things in and around Portland, Oregon. He’s got a vintage skate style, and recently, he was kind enough to show us around his local haunts. Coffee shops on every corner, quaint, quirky neighborhoods, sidewalks smothered in roses and succulents, big trees and vintage flairs, donuts, a city where the 1990s dream came alive. There’s no place like Portland.

Where were you born?

I was born in Portland, Oregon in the United States of America.

My zodiac sign is obviously a Pisces, because I definitely feel like I’m meant to be in the water. I’m a fish.

I’ve been listening to a lot of punk rock lately. I really like Agent Orange, The Spits, and to go off of punk rock, I like reggae a lot. The Black Uhuru. Sometimes you gotta go fast and sometimes you have to tell yourself to slow down, so it’s a good balance. 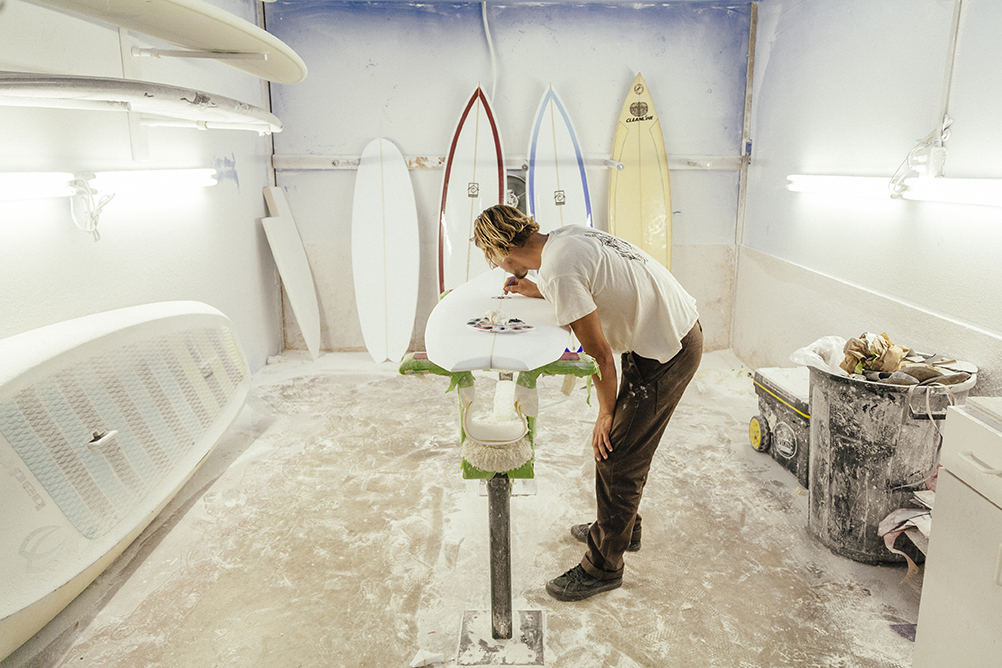 I would wake up before the sun came up. I would be on the Oregon Coast near Cannon Beach. I would have all my friends together, and we would go get some coffee at my favorite coffee shop that I actually work at called Sea Level, get some caffeine in our bodies and then go out for a little surf at some random beach break. Afterward, we’d go for a little skate. There are some fun skate parks around there and then midday do some art. Maybe go swing on a hammock on a cliff and then in the evening go down to this place called the Salmonberry, it’s a new spot. I really like the vibe of that place. Maybe have a beer there until the sun goes down.

That sounds like a pretty perfect day to me.

Where did you grow up? And what’s it like there?

I’m from a small town in Washington called Camas. It’s about a half an hour north of Portland. There’s not much going on there. There’s a paper mill and it’s funny, because in high school our mascot was a paper maker.

It was nice to grow up in a small town, because we had a little lake. It was pretty mellow. It wasn’t like living in a big city like the hecticness of traffic.

Did you get time to go into the city even though you’re from a small town?

I grew up skateboarding before I even started surfing or snowboarding. I would go into Portland every weekend with my friends from Portland, and we’d go skate around. We had all these indoor skateparks. They’re kind of shut down now. We were really stoked, because we could skate when it was raining outside. We’d go to the Department of Skateboarding. We’d get dropped off, skate all day, and get sweaty. The Max (transit system) was actually free at the time. So we didn’t have to pay for the Max, and we could go street skate and skate down parking garages and follow each other. Definitely spent quite a bit of my childhood going around Portland skateboarding. It’s a little bit different now because a lot of people are moving there, and because of social media people are finding out how special the Northwest is. There’s a lot of forest and city life, as well. Everyone is seeing how special it is. 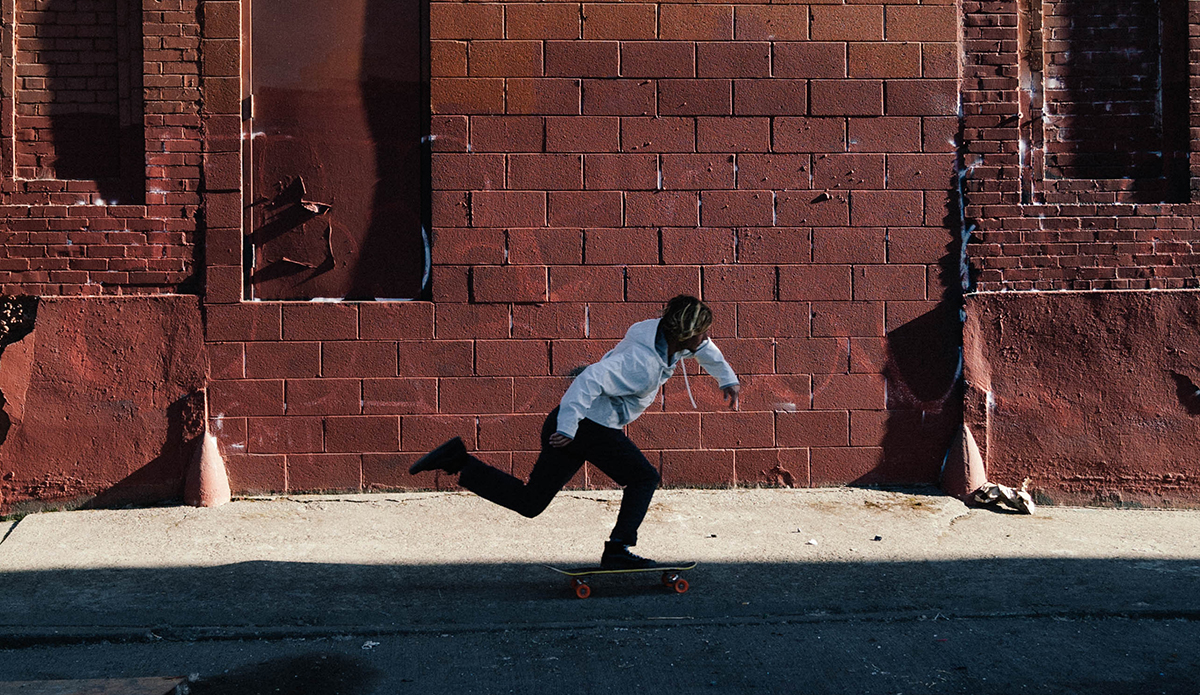 Where do you call home?

Right now I’m still in the Northwest, but part of the year I have a gig in Panama. I live there for seven to eight months out of the year, so it’s a nice balance living in the tropics and then coming back to wearing a jacket and it being cold. It’s a good balance, but I think home is where you feel comfortable and where your good friends are and where the people that make you happy are.

Surf, skate, snowboard…How did that all begin, and who influenced you the most?

My brother taught me how to skate when I was five years old. We would always skate together, and then he started snowboarding. My brother is about six years older than me, so he got me into snowboarding. That started when I was 12-years-old. Then my buddy RJ’s dad got me into surfing when I was about 14, and when he got his license we just started jamming to the coast and just loved surfing so much even though we were so bad at it. We both never had a surf lesson, and his dad was just like, “Take this extra large wetsuit,” and we’d get fully flushed with cold water. We were just floundering, and then it was just a progression. We loved it so much. We were just constantly going out and getting after it.

I feel like for whatever you do, you find those certain people that get you more and more stoked on it, and I kind of found that with all three [skate, surf, snowboard]. They all progress together. I progressed really quick with skating, because when you start something when you’re really young, it grows with you, and you get that muscle memory. But then you learn how to deal with a mountain, and then it’s the ocean, and it’s more chaotic, but when you learn how to flow with it, it just works. At the end of the day, it’s just another board. 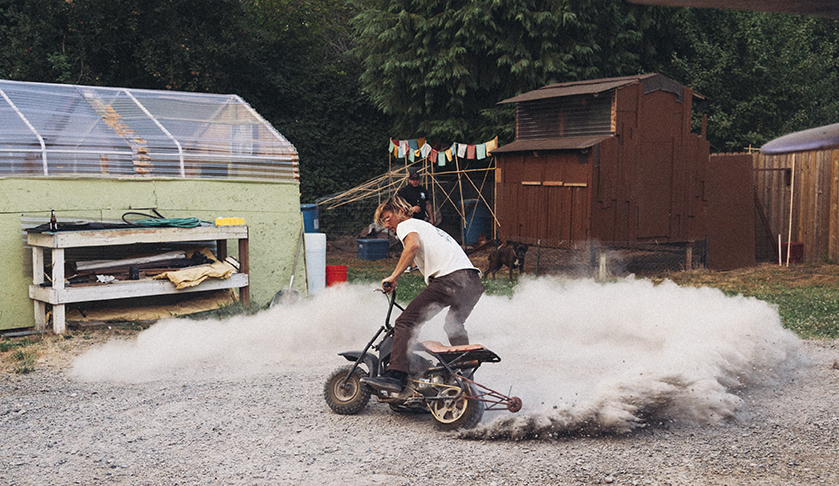 Surfing is literally like skateboarding but with a foam pit.

Do you think it’s necessary to keep a balance between the city and being away from the city?

If you live in the city, it’s pretty cool, because you can ride your bike around or you can skate to work if you want. It’s fun to do that, but you can definitely get stuck in the rat race. It’s nice to live out here [on the coast] because you don’t really have that many friends. Or all of your friends live in the city, and when you get off work out here, you can just go hang out on the beach and stretch and just breathe fresh air where it’s not toxic pollution from cars and lights. It’s definitely more relaxing at the coast.

What are some of your other interests?

I like taking walks. I don’t necessarily call myself a hiker, but I like to take long walks either on cliffs or on the beach. Music is great. I love music, I love playing music with some of my friends. Some of my friends have bass guitars and normal guitars and a drum set. The other night I actually went and played the drums, and I kind of have a secret talent that I didn’t know I have. So I’m kind of stoked about playing the drums. I’d like to possibly pursue that with a band in the near future so stay tuned. 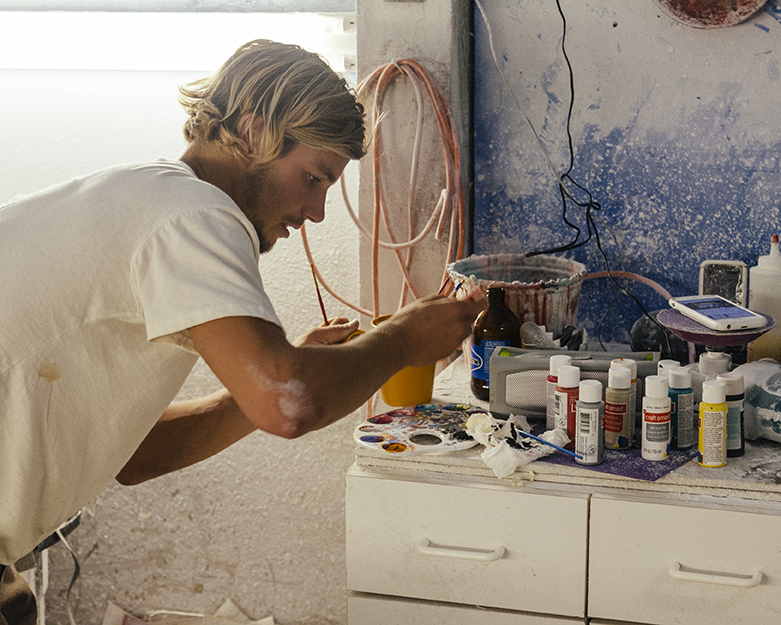 What do you want to be when you grow up?

I thought I was already grown up. (Laughs.) No, just kidding, I would like to not grow up into a normal adult, I would like to do what I’m doing. I’m just doing what I love to do, and hopefully I make a living doing it. I want to stoke people out. In Panama, I teach surf lessons, and we do it in a completely different way. I feel like it makes a bigger impact on people’s lives rather than just pushing people into waves and having them go over the falls; it’s actually teaching people how to read the ocean and enjoy the ocean and deal with things coming at you at full force. I think giving back to other people that don’t have what you have is what I want to do and pursue that into a career somehow. Hopefully, I’ll be smiling by the end of it, whatever I do in life.

I think they get a refresh on what life really is. What land and what the sea is, and how different it is being a normal human on earth where you have a normal job.

Some people don’t have a getaway or a passion, and then they discover this passion. When people find these little things and a passion, whether it’s surfing or the ocean, they are immersed in a completely different being… They find a sense of refreshment or a, “Wow! I was so scared of this, and now I’m so calm.” I like to teach people how to relax. We teach them that this is how you should be in your normal life. For example, your boss is running at you, and you’re freaking out. You think he’s going to fire you. You just need to relax, take a deep breath, maybe he’s there to give you a raise and you were thinking something completely different.

The ocean does the same thing, the wave stands up. It’s coming at you, and you’re freaking out like, “This thing is going to eat me! What am I going to do!”

You just relax. Just deal with it. Look past it.

I like to show people that, and they can go back to their life with a completely different mindset. 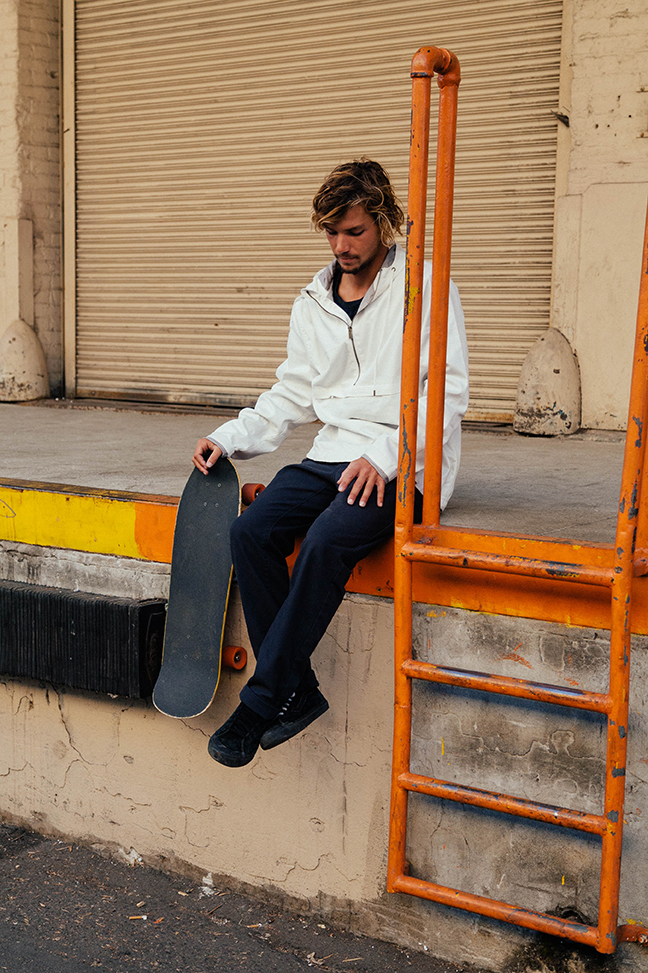 What’s next for you?

I go back to Panama in October for a while and I’ll be teaching surf lessons and definitely surfing a lot. I’m going to buy a new motorcycle and hopefully not break my neck. I’m going to live off the grid, make a few films down there and bring a camera. I’m going to have a cleanse while I’m down there and focus on what my body can actually do and how healthy I can get …so try to focus on keeping myself young and be able to do these things as I grow into an elderly body.

If you could give anyone a wise piece of advice what would you say?

Whatever you’re doing, look at it, and if you’re not happy then change it. Just change it, and do something else. Do what makes you happy, whatever makes you smile. That’s the best advice I could give.

Oh and save your money, so you can travel. 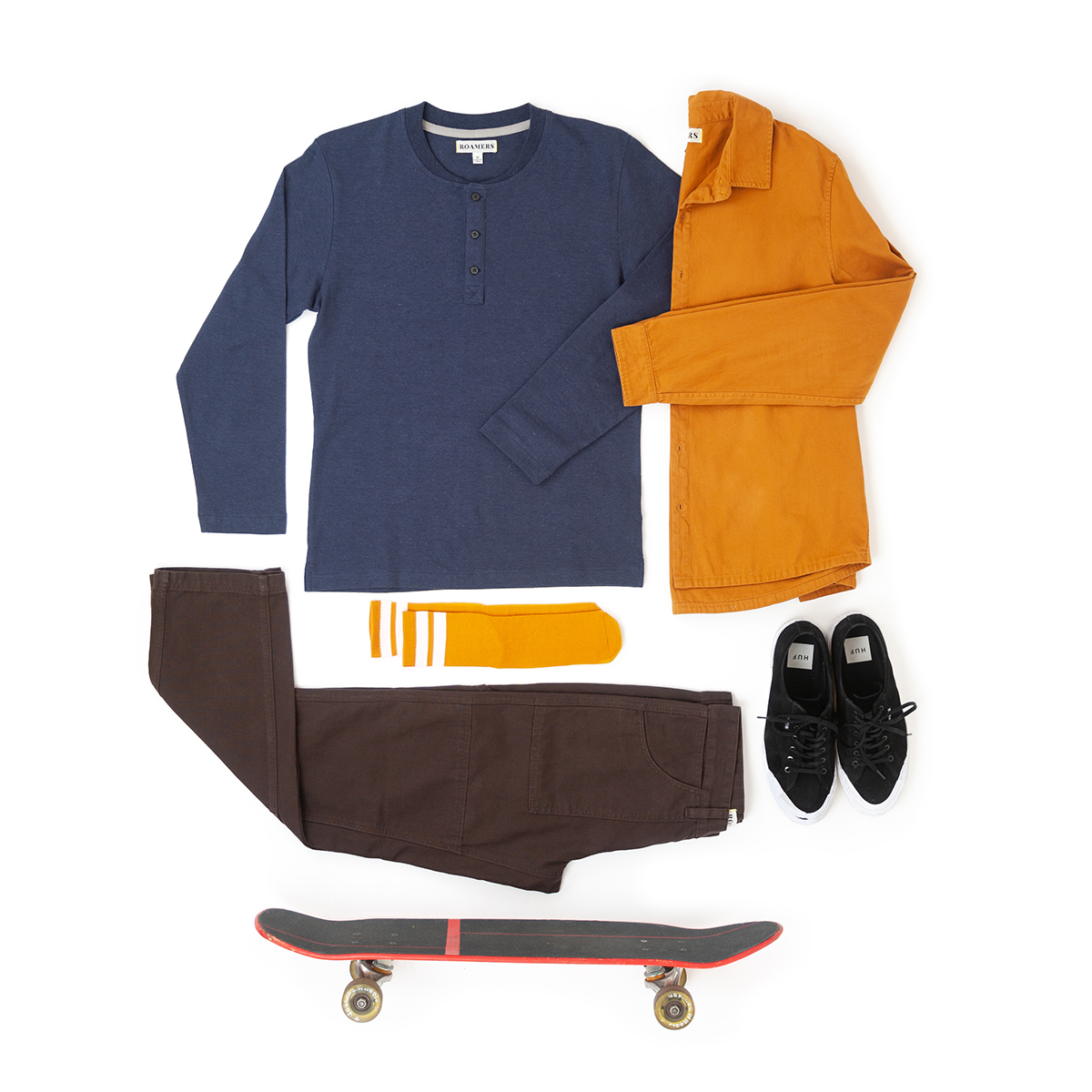 The Marin Button Up in Dijon