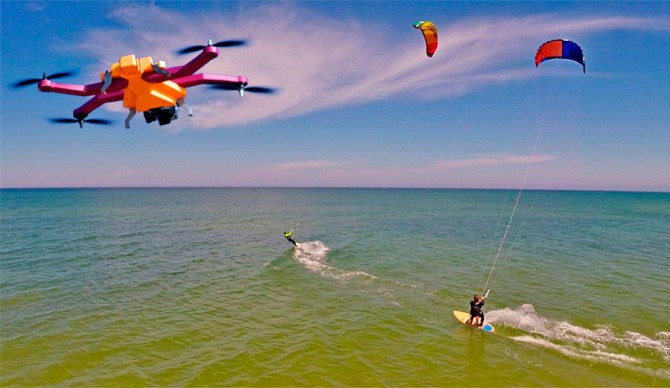 A personal photographer you don’t have to pay and is always available. Photo: AirDog

It’s all too often the latest gadget is labeled as a “game-changer.” Manufacturers increasingly claim to have rewritten the rules, raised the bar, and pushed new boundaries. And more often than not, its marketing spiel is aimed at shifting generic products to a mass market. Sometimes, though, something pokes its head above the parapet of mediocrity and can genuinely lay claim to being revolutionary. The GoPro fits into this category, as it has brought professional quality recording equipment to the average Joe.

The problem with GoPros for surfers has always been how to get that one shot. Yes, there are poles, straps, braces, and grips, but finding a method of filming an entire wave from a satisfactory angle is challenging. The only way to really get decent footage is to have someone else holding the camera. But who is going to reach for the camera rather than their 5’11″ thruster when the waves are firing?

It looks as though there is now an answer, a bona fide game-changer that can genuinely lay claim to have set the new standard for those looking to record footage of their sessions. Meet AirDog. The creators of AirDog have created a drone that, through GPS tracking technology, follows its owner, hovering at a predetermined height and distance while recording the action occurring below and replicating the loyalty of its four-legged counterpart.

AirDog: as loyal as your lab. Photo: AirDog

So how does it work exactly? The surfer chooses a takeoff point on dry land, which also acts as a landing point when time is called on the session. The surfer wears a waterproof tracking device on his or her wrist, summoning the drone and camera back to its starting point.

It’ll be interesting to see if the claimed 250-metre range is enough to play with when faced with the shifting peaks of a solid beach break, or whether the battery life inspires enough faith to confidently send your costly GoPro camera heading skywards on a path of its own. But the stats look good, and the initial footage is impressive. It’s expensive, especially considering that it requires an already pricey GoPro to actually do the recording. But if it works as well as claimed, and you’re serious about capturing unique and previously unobtainable footage of your surfing, AirDog really could be your new best friend.