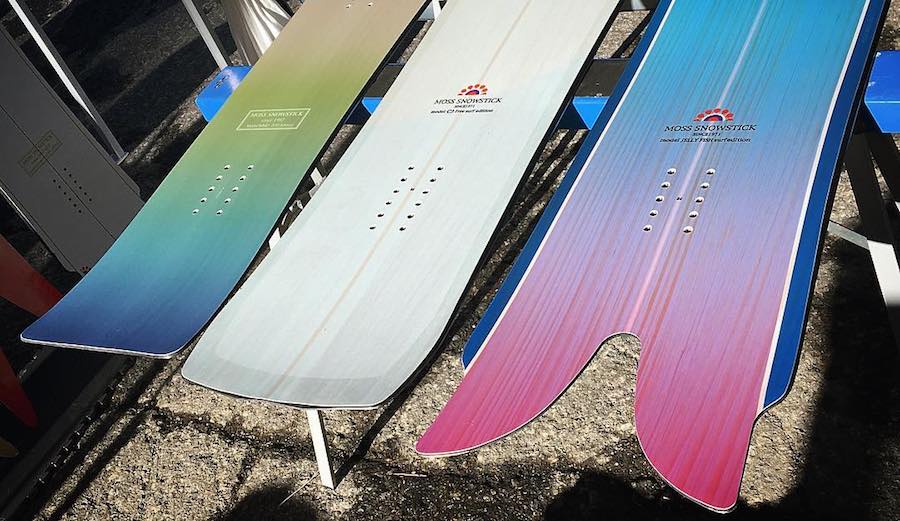 Japan-based Moss Snowstick is the originator of the snowsurfing approach. And the company’s designs have hardly changed since the 1980s – that’s how well they work. Photo: Moss Snowstick

As the sun quickly rose over the mountain top, a crisp morning gave way to a bright and temperate afternoon at a recent early season day at Mammoth Mountain. As I skated through the lift line, uncertainty turned to excitement. While researching a story earlier this year, I managed to connect with the good folks at the Japanese snowboard maker, Moss Snowstick, whose founder, Shinzo Tanuma, has been making surf-inspired snow shapes since the early 1970s. And now, the opportunity arose to put two of these shapes – the C3 and the Jellyfish – to the test.

To say it was low tide at Mammoth would be overstating it. Imagine instead an empty ocean filled a few bathtubs worth of water and the analogy would be more apropos. To some, a 12-inch manmade base isn’t exactly ideal for putting a few board models through their paces. But, arguably those are the precise conditions in which a great all-mountain snowboard (of which there are few) distinguishes itself from the crop of good all-mountain snowboards (of which there are countless).

Surf-inspired shapes of the directional, swallowtail, set-back stance variety have taken the snowboard industry by storm in the last ten years, mainly due to their float characteristics in deep powder. But, many of these models (the C3 and the Jellyfish included) bill themselves as providing a surfy feel both in powder and on groomers. Having none of the former and ample of the latter at my disposal, I can honestly say the performance attributes of both models blew me away and delivered the surfiest feel I’ve ever experienced on hardpack. Let’s dive in: 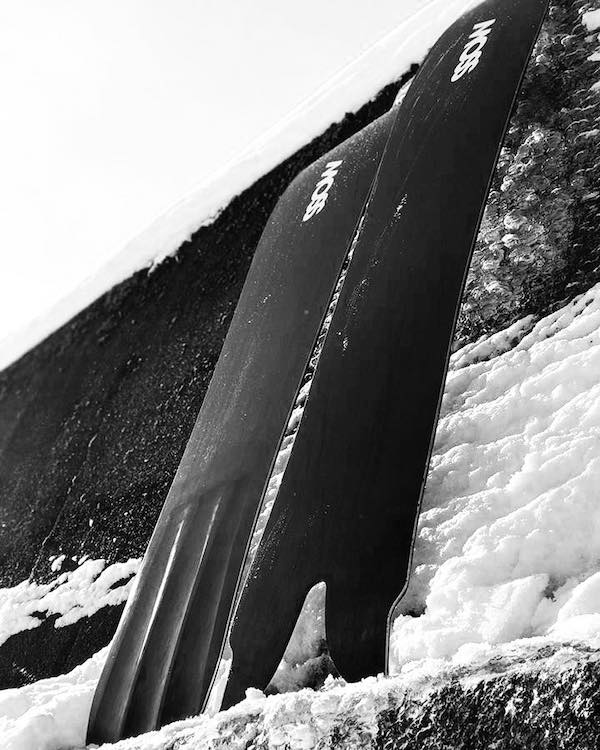 The C3 (left) and the Jellyfish (right) in their natural habitat. Photo: Moss Snowstick

The first Moss I had the benefit of testing was Moss’ C3 – so-called because of three channels that start under the back insert and carry through the tail. Being somewhat familiar with the merits of channels in surfboard design but having never seen them on a snowboard, I had little idea how the design would translate on snow, especially hardpack, but was anxious to find out.

On a normal day, I typically ride a 158 all-mountain shape. So at first blush, the C3’s length was a bit of an adjustment to look at underfoot. The C3 is short but makes up for it with its super-wide, boxy shape.

According to Moss, the C3’s bottom contours and Fishbone core are built to provide a locked-in feeling as you transition edge to edge. And on my first run, that’s precisely how it felt. The board’s width, too, meant minimal toe and heel drag, even in a size 11 boot. 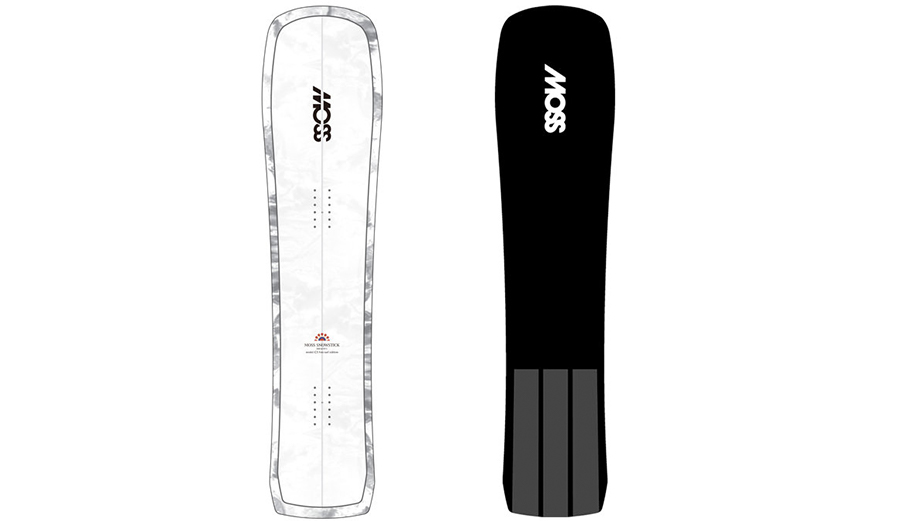 The C3, like all of Moss’ boards, has an incredibly set back stance. I mentioned that the channels start under the back insert the same way typical shortboard designs in surf are best ridden with the back foot above the fin cluster. It would seem that’s the logic here – channels (like fins) create hold without increasing drag in soft and hard snow alike. And according to Moss’, their Step Back Rocker system is really designed to be driven from the back foot as you would a surfboard.

What I loved most about the C3 in icy-turning-slushy conditions as the day progressed was its ability to cut through chunder, especially at speed.

I’d rate this board as moderately stiff. Moss says that’s due to its Fishbone core with a lighter and torsionally softer tip and tail, and longitudinal stiffness underfoot.

I’d definitely recommend this board for the all-mountain charger (especially with big feet) looking for a surfy speed demon that doesn’t flinch when you put everything you have into a turn. 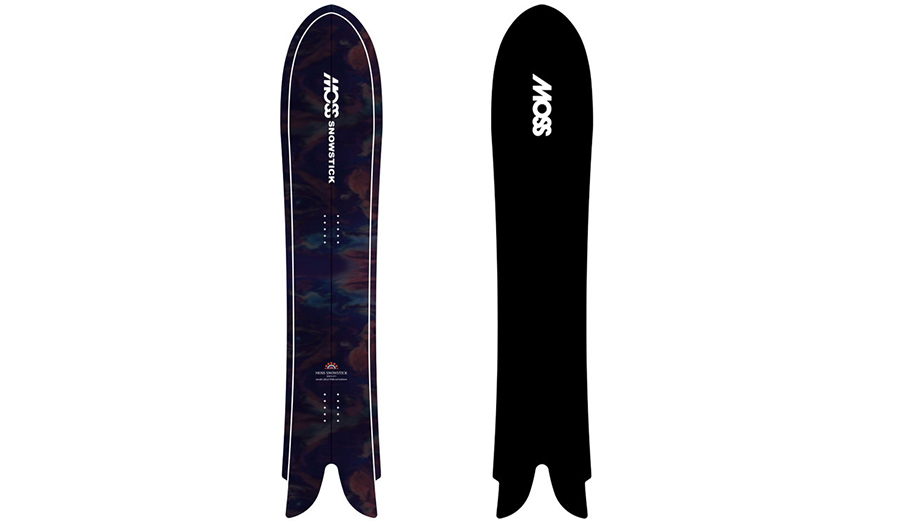 If the C3 is the snowboard equivalent to a hi-fi six-channel thruster, the Jellyfish is its cruisier cousin that seems to delight in low-angle shredding.

First: the design features. Most notably, the Moss Jellyfish has an exaggerated swallowtail with wings. Like the C3, the action is underfoot with a Step Back Rocker with a touch of camber under the back insert.

Where the C3 had superior hold on-edge at high speed, the Jellyfish felt like it wanted long, drawn-out, sweeping turns and really excelled in parts of the mountain where you could use a steep section to get speed then bank into a turn on a flatter more open section and accelerate through it.

With the same 27 cm waist width as the C3, again I had zero toe or heel drag when laying into turns on the Jellyfish.

Between them, this is the board where I found myself wishing for a few feet of fresh to really see how the swallowtail shines in the deep stuff.

I’d recommend the Jellyfish to a cruisier all-mountain rider with a nose for pow stashes who also loves linking soulful, sweeping s-turns on low-angle groomers.

For good reason, Moss Snowstick is often heralded as the snowboard maker kicking out the surfiest shapes on the market and after a few days on two shapes, in particular, it’s easy to see why. Check out Moss’ entire 19/20 line here.