The SWYTCH Turns Any Ride Into an Electric Bike 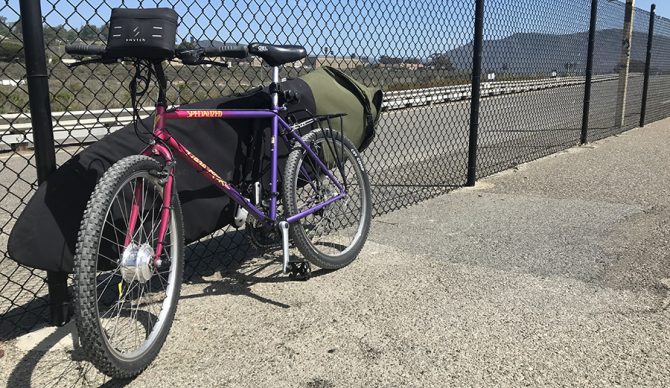 Electric bikes are everywhere these days. And many don’t even look like bikes. They’re miniature motorcycles. There’s nothing wrong them other than crowding up Trestles. But e-bikes are pretty expensive. Some cost about the same as used cars. There are other options, though. My favorite? SWYTCH is one of the most smartly engineered, easy-to-use conversion kits for your bike you can find. And it’s completely affordable.

The good folks at SWYTCH sent me a kit to test from their headquarters in the UK and I’ve put the system through its paces. Years ago, I came across an original Specialized Hard Rock mountain bike. No shocks. Just really well-made parts, dependable gear system, and a very solid surf commuter when combined with a surf rack.

SWYTCH bases its whole system off its proprietary front wheel  – what the brand calls its “high-torque brushless hub motor.” All of your power for the bike comes from that front hub. You simply order a hub size configured to your bike (26″, 27.5″, or 29″).  The installation is relatively easy. A round plate is installed at the pedal crank which is then wired to the battery mounted to the handlebars with another solid proprietary system. These are then wired to the front hub, which is activated by the pedal drive. To be frank, I paid my local shop mechanic $100 to install it and in my mind, it was well worth it as they made sure everything was tight.

I’ve probably put at least 100 miles on this system now. First, a few drawbacks: The battery is sensitive. As with a lot of batteries in different industries, you can’t leave it charging overnight too many times or you’ll begin to decrease its life. I’m very careful with it. The pedal sensor – attached to said pedal crank – is a round disc with magnet sensors and they’re a touch fragile. Like when you put it in a car without a rack and bump them, the system will stop working because the sensors are separated from the plate (it’s easy to adjust back into place, though). With the SWYTCH system you’ll be able to average around 13-15 miles per hour, which is plenty of speed but you won’t reach that 30 mph cusp where you’ll feel like you’re on a motorcycle.

Now, for the positives, which are many for me. First, price. There are two versions, the ECO and the PRO. With discounts you can get the system from between $500 and $1,000 (look for deals provided by SWYTCH). The battery is super easy to remove and charge and I was able to get almost 10 miles or more per fill up (I don’t think I quite hit its limits). I could easily take at least two trips from San Clemente to SanO and back, for example.

I also love the convenience. If I were to ride somewhere and meet family, I can easily put this system on a car rack because it’s just a traditional bike, not a bulky e-bike that almost needs a separate trailer. In addition, the SWYTCH kit is really simple to install, and easy for bike shop folks to understand and continue to keep your favorite “town bike” tuned up. In short, it’s just easy to understand, use, and maintain.The people at SWYTCH continue to evolve this kit so look for it to become even lighter and more paired down. For the price, you can outfit multiple bikes before you even come close to the price of a high-end e-bike.

Find out more at SWYTCHbike.com.