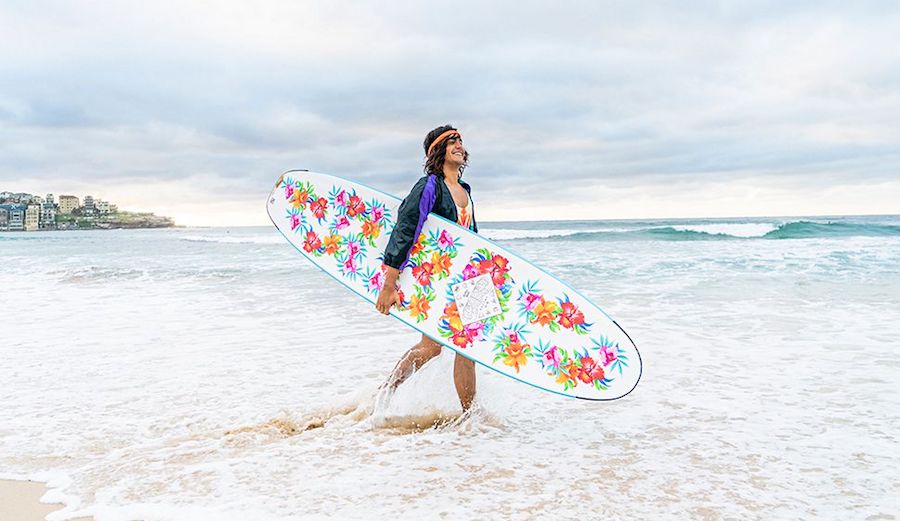 At select Awayco affiliates in Australia, this board is available to use for free. It’s sparking a much-needed conversation around mental health. Photo: One Wave

For surfers, when faced with troubles the natural inclination is to jump in the water. Surfing is by no means a cure-all, but it can be therapeutic in that way.

It’s no wonder, then, that when Grant Trebilco was hospitalized in 2012 after struggling for over a decade with mental health issues, one of the first things he did after being released was head to the ocean. He put on a shirt, tie, and boardshorts and went surfing precisely so people would ask him questions. When they did, it sparked conversations about mental health, and so One Wave (short for One Wave Is All It Takes) was born.

In the years since its founding, One Wave’s Fluoro Fridays initiative – wherein surfers gather at the beach in their best and brightest fluorescent garb to raise awareness about mental health and support one another – has spread all over the world and even recently received a royal endorsement.

In honor of six years of One Wave, the non-profit recently partnered with Awayco, a company that specializes in on-location equipment provision at select beaches around the world, and Mick Fanning’s MF Softboards to create a specialty foamie that’s free to use for anyone so inclined. One Wave is calling it the Free the Funk board, and the idea behind it is simple: if you find yourself needing a surf and without a board, lack of cash shouldn’t preclude you from catching waves.

“The Free the Funk board is going to give more people the chance to ride waves and openly talk about mental health,” said Trebilco in a release. “Sometimes one wave really is all it takes. We couldn’t be more stoked about this partnership.”

For now, the Free the Funk board is in an eight-week pilot program and as such will only be available at Awayco HQ in Bondi, Cronulla Surfing Academy, and Maroubra Surf and Skate.

“Awayco is proud to be supporting OneWave to open dialogue about mental health issues,” said Gideon Silverman, Founder and CEO of Awayco. “We hope the Free The Funk board helps lots of people, regular surfers as well as people who haven’t surfed before, experience the health and healing that comes from returning to the ocean.”

To take a Free the Funk Board for a whirl, you’ll need to first sign up with Awayco, here.