This beautiful woman is my Mom, my rock, and the strongest person I know. A week ago I was struck with the worse news of my life, my mom has been diagnosed with stage 3C Throat Cancer. Today I am sitting next to her as she is receiving her first Chemotherapy treatment. We will fight this fight together and I will do everything in the world to make sure we win. I love you Mom. #FUCKCANCER

Editor’s Note This feature is supported by Ecosciences. Learn more about them here.

In early 2017, Billy Kemper was introduced to cannabinoids. As a professional surfer who’s constantly training and spending his days in the ocean, CBDs were already a popular supplement among athletes seeking ways to recover. But his daily routine of using a CBD supplement now is actually rooted in something he has a deeper passion for. It’s obvious the moment his story shifts from himself to his mother.

“On the downside, my mom is fighting cancer right now and she uses it,” he says after running me through his own twice-daily routine of taking a hemp-based cannabinoid vitamin called EcoCaps and EcoDrops, post-training and before bed. When the Kempers shared the news Billy’s mother was diagnosed with stage 3C throat cancer in early 2017, he says that’s when friends immediately started pointing toward CBDs. “Get her on that as soon as possible,” he says he was told. “That was kind of the start of it.”

“We feel like it’s really helping her. Not only with sleeping and just calming her nerves, but also it’s also helping shrink the tumor.”

According to EcoSciences, the California-based company Kemper is now an ambassador for thanks to his experience with cannabinoids over the past year, fighting tumors is one of the legitimate uses for CBDs in a long list of health aids. For athletes, regular use is said to suppress muscle spasms and reduce inflammation, along with fighting off bacteria that can otherwise run us down and make us sick. EcoSciences now has a roster of professional athletes like Kemper who have become advocates for their CBD products, ranging from surfers like himself and Sunny Garcia to professional MMA fighters.

“There are many misconceptions about cannabis but the first one worth clearing up is that both marijuana and hemp are plants that are part of the cannabis plant species, and both contain compounds called ‘cannabinoids,'” the company writes. “When we consume cannabinoids, they stimulate the endocannabinoid system, a system of receptors throughout our central nervous system and almost every organ of our bodies Cannabinoids are the keys that unlock these receptors and this system is incredibly important to our health.” 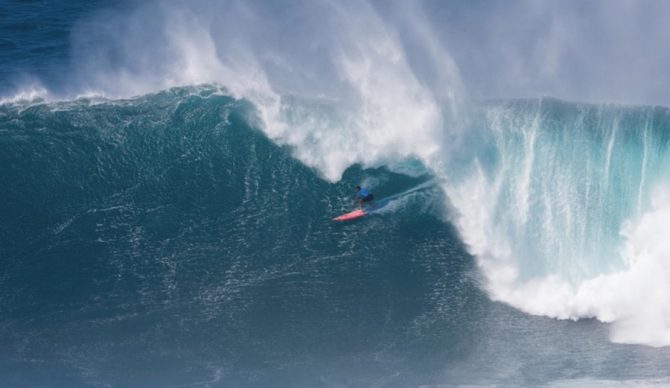 “I truly hope that doctors here in the United States can really start pushing products like this,” Kemper says now, “because if it’s coming from a plant grown organically and it can help that much, why not use that instead of these pharmaceutical drugs that end up taking over people’s lives and ruining them?”

While CBDs are gradually becoming a more commonly accepted health aid, the conversations and research about their benefits will definitely be something we learn more about over time. But at least for now they’ve given one of surfing’s most respected big wave chargers and a devoted family man some positivity and hope.