Editor’s Note: This feature was made possible by our friends at Goldthread Herbs. Learn more about their plant-based tonics here.

“Careful where you drop those weights,” Laird instructed me. “Randy almost lost his finger. We had to take him to the hospital to make sure he kept it. But it wouldn’t have mattered. He’s a writer.”

Randy, also known as Randall Wallace, wrote Braveheart. When we arrived to Laird and Gabby’s residence in Malibu, Wallace had just finished up his pool workout alongside John C. McGinley (recognizable as Perry Cox from Scrubs), Danny Fuller, photographer Adam Guy, and pro snowboarder Lyon Farrell. They hopped out of the water with dumbbells, into the sauna, into the ice bath like clockwork, and casually floated around the property.

Laird’s pool is basically the community gym for a group of exceptional Angelenos – diverse in their accomplishments across many fields: acting, surfing, snowboarding, entertainment, virtual reality production, and beyond. And at 7 AM on a Wednesday, they had just finished up a workout series Laird had been developing for over a decade.

I, bleary-eyed and anxious, however, was just getting started. Laird and Gabby invited us to join them for a pool workout several months prior, and we anxiously accepted. Their pool workouts have developed a torturous reputation; They combine free weights, saunas, and ice baths with a series of underwater exercises designed to shock the body and challenge the mind.

I had one goal: Don’t pass out.

We started with the ice bath. I want to reiterate that it was 7 AM. I had spent the last seven hours warm under a blanket. So ripping the band-aid off by submerging in 40-degree water for a full minute was the equivalent of sticking my finger in an electrical socket. I decided to surrender to the icy water. There was nothing else to do. Which is the point. My body and mind were screaming at me, getting so cold that my legs, ironically, felt fiery, but I tried to just accept the sensation as a neutral feeling – neither good nor bad. The icy fire enveloping and slowly paralyzing my limbs was neither icy nor fire. It just was.

And that mentality was instructive for the entire experience.

“That sets the tone,” Hamilton told me. “Getting comfortable in uncomfortable situations.”

Beyond the mental aspect, the cold and heat had a physical impact as well.

I felt a bit wobbly as I exited the ice bath. My head a balloon, my legs lead weights. Dizzy, I nearly lost my footing. I was hoping no one noticed, but I almost fell over. It was beyond my control. The icy sensation, right off the bat, invoked disorientation. But I recovered. Not sure how, but I transitioned from near-faint to doin’ fine in a moment. K. I’m good. Prolonged cold is intense. Next. 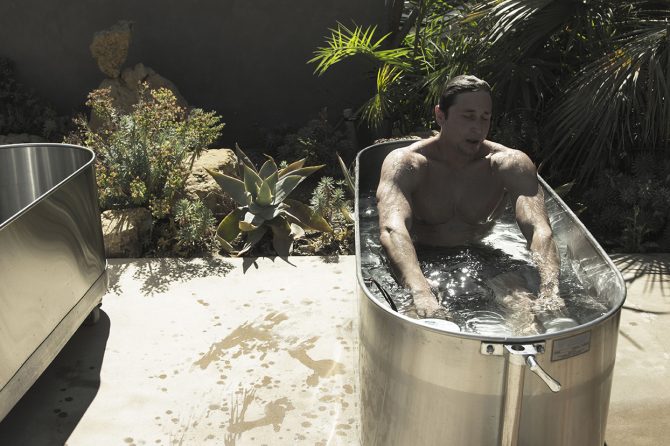 This was actually the second ice dip. The ice had melted a little bit, but sitting in ice water is certainly a viable coffee substitute. Photo: Aika Lau

While many workouts involving weights emphasize tension and exertion in the name of building muscle and tone, this workout focuses on the acceptance of adverse circumstances and intentionality. Any effort expended underwater – both physically or mentally through anxiety or fear – immediately impacted my available oxygen. If I felt anxious or afraid while holding those weights underwater, precious seconds vanished from my breath-hold. Any stroke or body movement that didn’t assist the task at hand directly impaired it. Never before have I had such an awareness of whether my behavior, in every sense, was productive. Because if it wasn’t productive, it was actively destructive. I suppose that’s true of everything in life. In essence, the exercise had a counterintuitive message: Try less.

That makes a lot of sense for an athlete training for ungodly turbulence and big-wave hold downs. The mental ability to accept terrifying circumstances is one that requires practice.

“This is about asking permission,” Gabby Reece told me.

In other words, Reece says that Laird’s superhuman big-wave antics have much less to do with imposing his will on the planet than preparing for the opportunity to participate. In circumstances of consequence, yes, the physicality is a prerequisite, but so is the mental fortitude. Laird’s pool workout is the physical manifestation of asking permission. 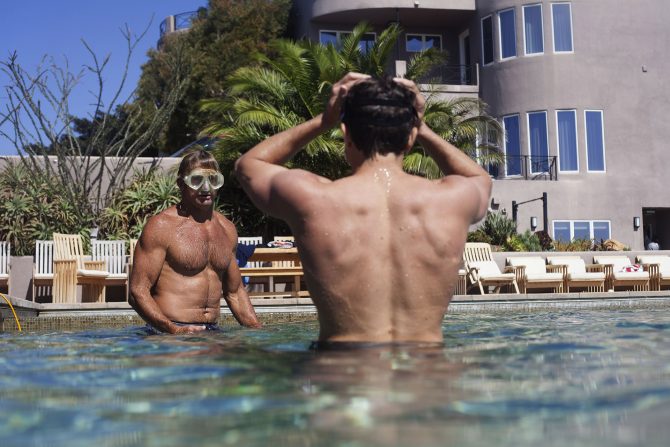 “Thermoregulation is the most energy-consuming process that you do,” said Hamilton. Photo: Aika Lau

We ran through a handful of weighted underwater exercises that drilled home the idea of intentional thought. Intentional motion. It was equal parts meditative as terrifying. Managing oxygen is no easy task. And the weights I was holding were literally anchors sticking me to the bottom of the pool. That’s where the fear would arrive. But, I was forced to recognize that converting that fear into anxiety is unproductive. It needs to be channeled into a constructive solution. Like getting to the surface. It was exhausting, but in a way that felt totally foreign to me.

To conclude, we hopped in the sauna and then shocked the body in ice water. This time, it was refreshing. To be fair, the sun had melted some ice and warmed the tub a few degrees, and my body was now active. More prepared for a temperature change.

My muscles weren’t sore from weight resistance. My mind was tired from staving off the fear and anxiety of drowning. As much as it looked and felt like physical training, it was definitely mental preparation. And I didn’t even lose a finger. Or pass out. 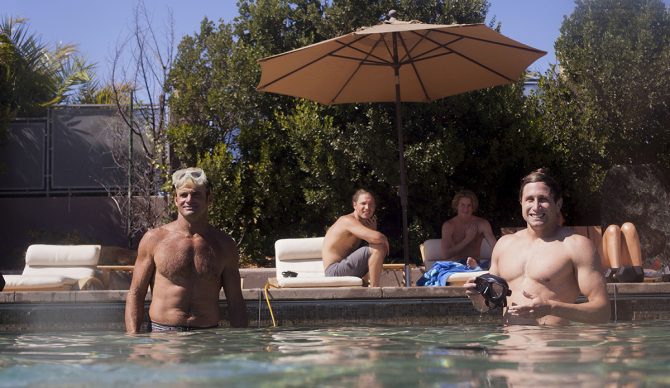 We’re happy, because no one has drowned! Photo: Aika Lau

Editor’s Note: This feature was made possible by our friends at Goldthread Herbs. Learn more about their plant-based tonics here.

Watch our (HEADSPACE) Interview with Laird where he discusses haters and fear, and check out a breathing exercise we did with Laird and Gabby here. Also, listen to Gabrielle Reece’s thoughts on health and happiness.