The Dangers of MRSA 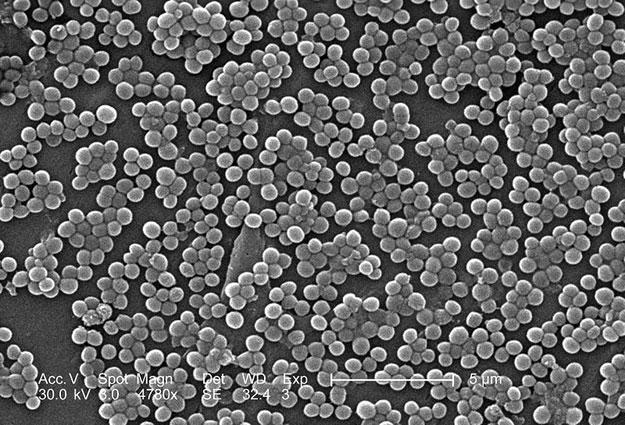 This was the only picture we could find that wasn't gag-inducing. MRSA is not pretty. Photo: Wikimedia Commons.

In 2008, professional surfer Ryan Carlson was rushed to the hospital after a small sea urchin cut he received while surfing in Puerto Rico became a large pus-filled abscess that was quickly taking over his left foot. After being admitted to the hospital, doctors diagnosed Ryan as having MRSA, the deadliest form of staph infection, and told him that in order to stop the spread they might be forced to amputate his leg, effectively ending his career as a professional surfer.

Ryan is one of many in the surfing community diagnosed with MRSA, because as surfers we often face exposure in the ocean and on the beach. I have had multiple friends who have battled with MRSA infections for months at a time, one even needing emergency transport from Bali. In fact, it is becoming so widespread among those who surf that Transworld Surf has named it one of the “top ten surfer sicknesses” of 2010.

Cases like these have provoked a string of medical studies yielding startling results: Nine out of the ten beaches in Washington State that were tested came up positive for staph including MRSA. Other beaches testing positive were found in Florida, Hawaii, and California.

Despite the local press the issue has received, it is unsettling how little people visiting the beaches know about the hazards of acquiring MRSA and the proper methods for preventing and treating infection. According to a study done by the U.S. department of Commerce, about 1 in 4 Americans visit the beach annually, generating 61 billion dollars in revenue for California alone. Yet looking through California’s premier tourism website visitcalifornia.com, there is not even a mention of MRSA, let alone any of the other risks undertaken when making a trip to the beach (riptides, sun exposure, dirty water).

Scientifically speaking, MRSA, short for Methicillin-resistant Staphylococcus aureus, is a bacteria belonging to the Cocci class. Like many other bacteria of this class, MRSA tends to multiply quickly, form colonies, and transfer genes horizontally between individuals, which makes it especially difficult to treat after initial infection, and gives rise to the amazing and frightening ability of bacterial colonies to quickly adapt to changing conditions, including our antibiotics. MRSA is most easily acquired through open wounds, and studies show that being buried in the sand seems to raise the risk of infection.

Think about how many times you have gone surfing with a cut on your foot and forgot to wash off the sand afterwards.  Traditionally this attitude of neglect came from the fact that if you got an infection, a quick trip to the doctor’s office to pick up some antibiotics was all that was necessary. And for the last couple generations, there really wasn’t any need to fear infection because we had a constant influx of new antibiotics coming from the pharmaceutical industry.

In the future, it is going to be up to every individual to take more precautions in preventing infection because we are likely coming to the close of the era of antibiotics and their wide availability. There has been a huge increase in multi-drug resistant strains of bacteria and as surfers we are exposed at higher levels than most others through contact with the water. The medical community has not discovered a single new class of antibiotics since the 1980’s, despite ample funding and exploration and the prospects for the future are likely going to be unable to meet the expected need.

MRSA and the future of antibiotics boils down to the question of what kind of world we want to leave to our children.  It is imperative for the surfing community to take action so that our kids are educated about these issues, not with media scares, but in the water, as good habits in healthy living need to start at a young age and be taught alongside lessons like putting on a wetsuit or catching your first wave. This is a call to arms guys. Help me out here.