What Is Dry Needling and How Can It Help Board Sports Athletes? 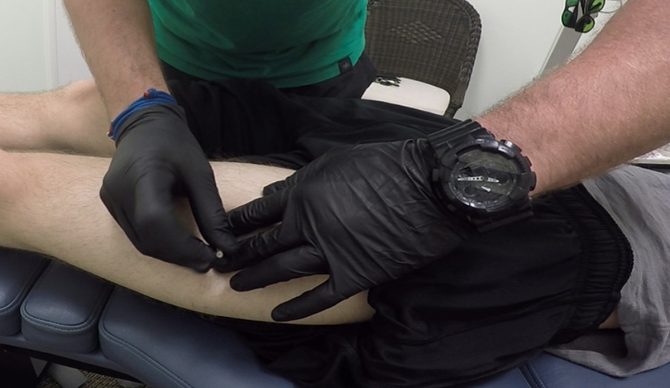 The history of Dry Needling dates back to the 1940s with Dr. Janet Travell. She identified the muscular trigger points and referral patterns connected to “wet needling.” Wet needling is when a substance (supplement or medication) is introduced to the body via a hypodermic needle. Later, she discovered that dry needling offered the same results. This was groundbreaking work and hence she created the name “dry needling.” She and Dr. David Simon carefully identified most of the trigger points located in the human body. And with that, the first generation of modern dry needling was established.

During my acupuncture curriculum, dry needling was referred to as a western-based approach to an acupuncture system. Some consider dry needling a subset of the acupuncture family tree. When Janet Travell was developing her trigger point dry needling treatment, she did not have any knowledge of Chinese acupuncture nor did she use this theory as a basis for her treatment. acupuncture is an eastern-based approach with meridian systems: the theory is that energy flows through pathways, or meridians, in the body. Acupuncture is just one pillar of the TCM(Traditional Chinese Medicine) model. Although dry needling originated in the traditional Chinese methods, it has developed from the ancient empirical approach to become a modern medical art rooted in evidence-based thinking and movement practice.

The oldest books about acupuncture were recorded in later bibliographies of Han dynasty dating approximately 200 BCE – 200 CE. Ancient Chinese were very skilled in iron casting and technically were able to produce acupuncture needles about the 5th – 4th century BC. Before that time, they probably used “needles” made of fish bones, animal bones, and/or stones. For more than two millennia Acupuncture was developing in China and was a part of Chinese medicine and martial arts.

The APTA (American Physical Therapy Association) says dry needling is a skilled intervention that uses a thin filiform needle to penetrate the skin and stimulate underlying myofascial trigger points, muscular, and connective tissues for the management of neuromusculoskeletal pain and movement impairments. It’s a technique used to treat dysfunctions in skeletal muscle, fascia, and connective tissue, diminish persistent peripheral nociceptive input, and reduce or restore impairments of body structure and function leading to improved activity and participation. As every practitioner knows or should know, there is not one specific style of acupuncture in practice worldwide today. In fact, there are numerous styles of Acupuncture, just as there are numerous martial arts styles, depending on where it’s practiced.

The AAMA (American Academy of Medical Acupuncture) takes a hybrid approach to their philosophy of treatment. They describe acupuncture as such: Medical acupuncture is acupuncture that has been successfully incorporated into medical or allied health practices in western countries. It is derived from Asian and European sources and is practiced in both pure and hybrid forms. Therapeutic insertion of solid needles in various combinations and patterns is the foundation of medical acupuncture. The choice of needle patterns can be based on traditional principles such as encouraging the flow of qi, a subtle vivifying energy, through classically described acupuncture channels, modern concepts such as recruiting neuroanatomical activities in segmental distributions, or a combination of these two principles.

Now, dry needling is a technique to treat the neuromusculoskeletal systems based on pain patterns, muscular dysfunction, and other orthopedic signs and symptoms. It depends upon physical examination and assessment to guide the treatment; moreover, this allows you to test and retest after a dry needling treatment has been performed. It gives you the opportunity to show tangible changes pre and post-treatment. Dry needling changes movement. It is our reset of movement. You have to appreciate the soft tissue and fascial layers. When we create such a reset and change the timing or sequencing, the movement pattern changes.

We know that dry needling acts locally, segmentally and systemically on the body. For example, when a needle is inserted into the tissue, local reactions occur at the point of penetration. The body reacts in such a way that it releases cytokines, substance P and CGRP (Calcitonin Gene-Related Peptide). Where the needle penetrates the skin, the body releases CGRP, which causes a cascade of reactions resulting in vasodilation, increased blood vessel formation, and increased tissue repair. In addition, the body will react in such a way that segmentally, at the spinal level, an enkephalin release will occur resulting in a local pain response. Moreover, a beta-endorphin release from the brain creating an analgesic effect will result in an overall systemic response.

Evaluating joint neurology, musculoskeletal integrity and the central nervous system for adequate movement patterns is so important. Think about it. If you have skewed information being sent to the brain due to pain or dysfunction, and we change some motor effect to the muscle and you have improved movement, then the treatment was a success. This is dry needling, and this is exactly what I see day in and day out in my own movement practice. The right or wrong method is not a matter of acupuncture vs. dry needling, but I think its based more off results. If you get results in the treatment or have tangible changes in your patient’s movement or symptoms, then that’s the right treatment. If you do not have any improvement, then that’s the wrong treatment. It does not matter which modality you choose.