Why Yoga is a Journey Best Shared 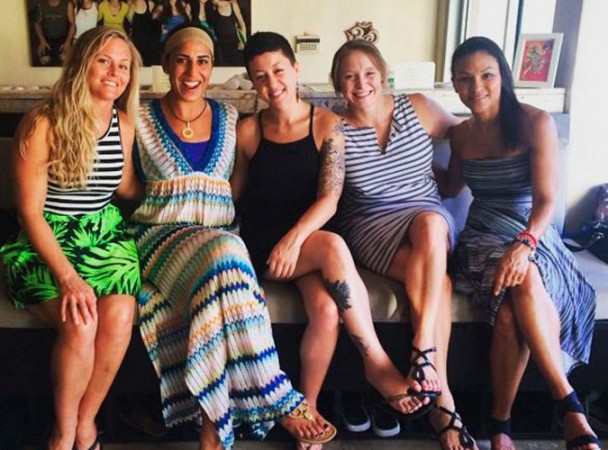 From left to right—Courtney Wolfgang, Kristin Shelala, Nikki Vanvoorhis, Lisa Pierce, and Carolyn Young are the voices and drive behind FindingIsvara.com.

For many, the art of yoga is primarily a personal journey, an inner challenge taken to help strengthen one’s body, mind, and spirit. However, thanks to modern technology, coupled with the instant gratification and visual stimuli that social media provides, yoga appears to be equally impactful when shared among the masses.

According to Wolfgang, Finding Isvara refers to the divine presence mentioned in Patanjali’s Yoga Sutras “Isvara.” Translation: Prepare to be inspired to try yoga if you have yet to indulge. And if you have already started down the path of yoga, get ready for the next chapter of exploration.

“What drew me to these four was their genuine nature,” Wolfgang says. “Though we were attending a program that was very traditional, these ladies did not present themselves as uber-disciplined, perfect yogis, but rather real people with real faults not yet perfectly walking the path of yoga—like me. We all had another thing in common, too: a sincere desire for growth and personal inquiry through the tool of yoga.”

Despite the new-found friends hailing from different parts of the globe, Wolfgang said the bond they formed was strong enough to keep them connected. Through subsequent discussions, a desire to work together developed in hopes to share a common message: You don’t have to be anywhere close to perfect to start down the path of yoga. “We wanted to share what it looks like when real-world, modern-day, fabulously flawed yogis attempt to use yoga to get closer to self-realization and better their lives,” Wolfgang says.

And while the average person might likely define yoga as an alternative fitness routine featuring an ambiguous spiritual component, it is that latter element Wolfgang hopes to address and help clarify in her blog posts. “I am a bit of a skeptic when it comes to the ancient teachings of yoga, such as Patanjali’s Yoga Sutras, a 2,000-year old text said to be the basis of all traditional yoga practices. Many people who are curious about yoga’s origins might be able to relate to me in that way.”

For those who attend a class led by Wolfgang, one lesson they are guaranteed to learn is how to appreciate one’s own empowerment. “Your body is capable of so much,” she says. “Your mind is capable of patience and compassion. You won’t attain these things immediately, but rather through coming to class again and again. Through giving genuine effort, you will baby-step your way to improving your body, mind, and life. Just showing up to class and doing the work is enough to start you down the path.” 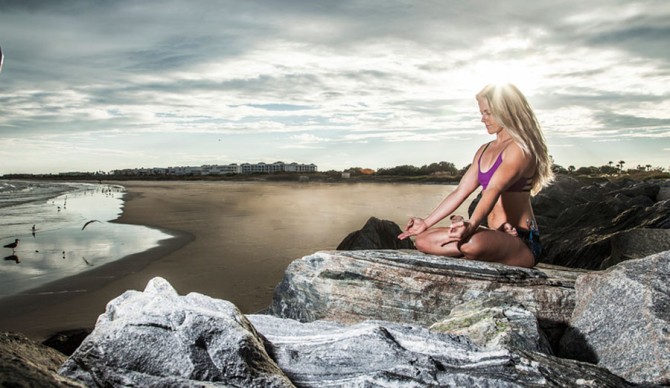 Courtney Wolfgang says yoga has been a key to many personal discoveries. Photo: Ande Spade Photography

Even though Wolfgang is a seasoned yoga instructor, the learning never stops. Yoga has been a key to countless personal breakthroughs and discoveries, Wolfgang admits, especially when it comes to seeing limitations as simply mind over matter.

“When I open my mind to greater possibilities, they become available to me. Yoga—Ashtanga in particular—provides this lesson because you are constantly challenged by the postures and the breathing. Whenever something is a physical challenge, the mind is challenged as well. There have been times I’ve said to myself, ‘I could never do that posture,’ but each time you practice you get a tiny bit closer to your goal. This gives you faith, and you start saying, ‘Hey, perhaps this is possible after all.’ This is a fantastic lesson that transfers into your daily life outside the yoga room, if you let it.”

To say yoga is stretching more and more into the mainstream would be an understatement. Of particular interest to me is the growing number of articles and/or instructional videos explaining how yoga can help enhance surfing skills. When I asked Wolfgang what it is about yoga and surfing that go together so well, she was more than stoked to point out the parallels.

“In yoga, when you are very focused within a posture, the outer world falls away and you feel great inner peace. I feel this same peace when I am sitting on my surfboard, staring out over the sea as I wait for a set. Also, there is a great amount of non-attachment involved with both surfing and yoga. You cannot control the surf conditions provided by nature, and likewise, you cannot force your body to do difficult yoga postures before it is ready. Similar to a huge storm swell, yoga has a way of humbling the ego because it is a great challenge.” 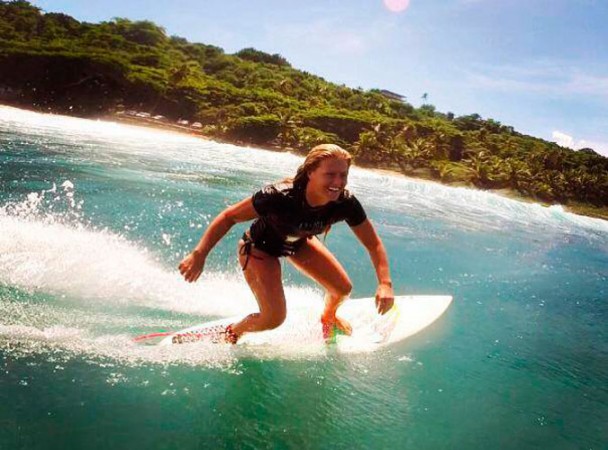 Yep, Courtney can shred, too.

While FindingIsvara.com finds its footing, Wolfgang has hope readers will identify with, and take to heart, what is written. “Hopefully, they will take away that not only is it okay to struggle with the dedicated work of self-improvement, but also the greatest beauty and rewards often lie within—or sometimes erupt forth from—these struggles. I don’t know if it is Isvara, but little by little we five are stumbling upon pieces of something great as we walk down the path of yoga.”