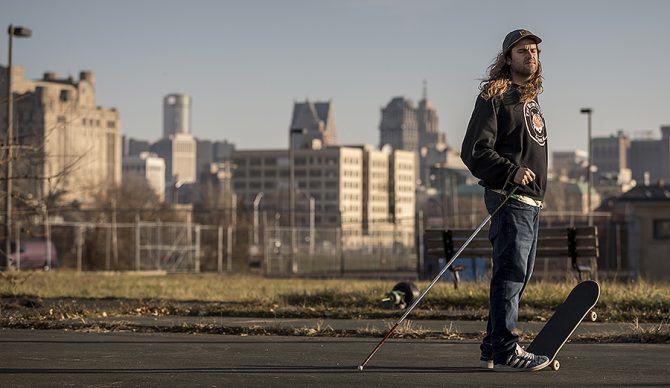 “I’m trying to get to that Kelly Slater wave pool, man.”

That might be an unusual, if dangerous, aspiration for a blind man, but in Dan Mancina’s case, it makes perfect sense. Since losing 95 percent of his vision and weathering the ups and downs of adjusting to life without sight, he’s learned a thing or two about why a disability shouldn’t stop a person from trying new things. He says he’s tried surfing a couple of times, so doing it at Kelly’s wave is now on the list.

“Coming from a skate perspective as a blind person, having an area or an obstacle that is consistent is the easiest to deal with,” he explains. “You can always start from the same point. Having the exact same wave every single time would be the easiest way to learn as a blind person.”

Growing up in Detroit, Dan started skateboarding when he was seven. When he was 13, he went in for a routine check-up and was diagnosed with Retinitis Pigmentosa, a degenerative disease that slowly took 95 percent of his sight over the next decade until all he had left was a blurry spot in his right periphery. Along with that, for a time, went the belief that he could still ride a skateboard.

“I was trying to figure out what a blind person is,” he says. “What does a blind person do in life? Going through my vision loss there was a time when I was bummed out and had a void in my life.”

Things shifted when the question evolved from, “What does a blind person do?” to, “What does Dan do?” He hated the low expectations people projected on him because of his vision impairment, hated being treated differently, and he eventually started to realize the answer he’d been searching for was pretty simple: Dan skates.

So he started skating again, routinely holding a white cane in front of him when he approached every little nook of a skate park. He says he only considers himself a skater as a blind person — doing it and living it — for the past two or three years now. It’s part of an ongoing mission to prove that a disability doesn’t have to minimize a person’s opportunities in life. That includes making appearances all over the world as a motivational speaker and teaching young children with vision impairment to skate through his organization, Keep Pushing Incorporated.

Most of the kids he works with now have never even stood on a skateboard, and often his time with them is spent just introducing them to a board — feeling the grip tape, the wheels, and giving them a sense of how it all works. They’ll stand on a board and he’ll hold their hand, rolling with them, and sometimes eventually progressing until they’re rolling along on a skateboard independently. Even though Mancina describes himself as a being an “average skater” before losing his vision, it’s tough to see him at work now and think it’s anything less than incredible.

Dan says going in a straight line is probably the toughest thing to do without his vision. Just like Kelly’s pool though, where every wave holds the same shape, he talks about skate parks having the same cracks, the same ledges, and the same trash cans, all in the same places. From there, it’s just about taking chances. It’s a good metaphor for the way he approaches his life’s work, teaching at his skate camps, putting on demos, and even raising money to build a skate park for the visually impaired. All this on top of going to school where he lives in Michigan, working towards a master’s degree in vision rehabilitation therapy, which he’ll use to help blind people regain their independence like teaching vocational skills and helping them find employment.

“Living their best life,” he calls it.

Funny enough, after all this, Dan says he now wishes he’d lost his vision earlier on.

“When you’re younger, you’re fearless,” he says. “I’d probably be doing way gnarlier stuff. I’m just on the tip of the iceberg.”

But more than just feeling it’d have made him a better skater, he points out that skateboarding, in particular, is a uniquely valuable skill set for a young person who can’t see.

“A lot of the sports for visually impaired or blind are team sports, but skateboarding is more individual. It allows me, and it allows kids, to express themselves. Skateboarding is about style. It’s the clothes you wear and the tricks you choose to do and what you want to skate. It’s expressive. That’s what it’s about; to give the kids that opportunity.”

His ambitions to get to Lemoore makes a lot more sense with all this perspective. Blind people aren’t expected to ride a skateboard or have their own pro model boards. We don’t expect blind people to tackle learning to surf. There are actually a lot of things we expect visually-impaired people to just stop enjoying or stop trying. So those are the very things Dan will do.

Editor’s Note: You can learn more about Dan’s journey on Red Bull’s short film, “Out of Frame.” It’s now available to watch on Red Bull TV. 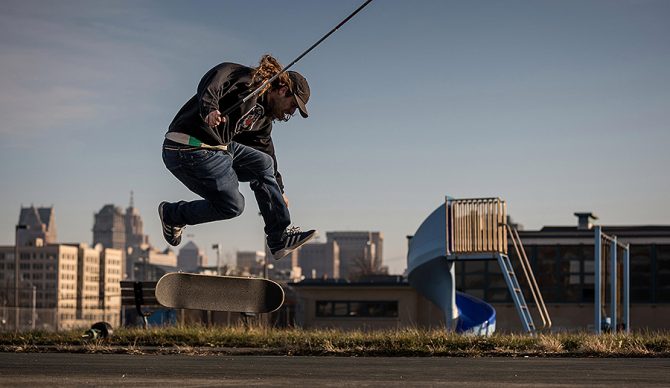