How Surfing Changes the Lives of Children with Autism

Editor’s Note: The following is an excerpt from Waves of Healing: How Surfing Changes the Lives of Children with Autism, written by Cash Lambert. As the title suggest, the book explores how surfing has transformed the lives of a group of everyday families in their search for hope, answers, and healing for their children with autism. 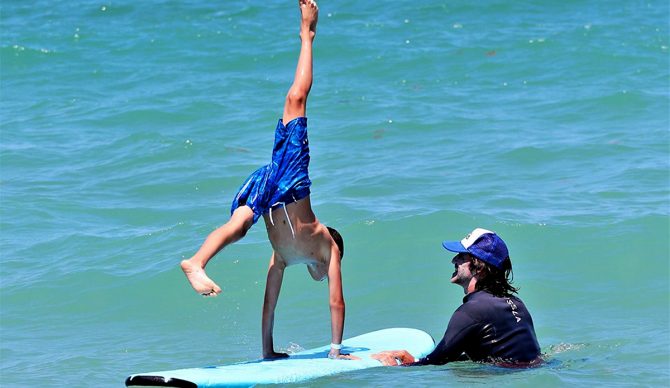 Minutes later, she’d pushed the board into a wave and began chanting: “Up, up, up, Andres! Stand up!”

After a high five—his entire hand and fingers fit in my slippery palm—I towed him back towards Miranda. As I headed back to my original catching position, I could hear Miranda saying something to him, but I could not catch the words over the crashing of the waves. Plus, the 49 other children in the water—surrounded by many of the 300 volunteers at the day’s event—were doing nothing to help the booming volume level.

I imagined that Miranda was talking to him about the goal: to stand, to surf, and about how incredible it would be for his parents to see him do something he’s potentially never done before.

And moments later, as Miranda fired him in my direction and onto a coming wave, something clicked. He planted his hands as if he was about to stand up. His shoulders and chest lifted off the board and he looked like he was about to pull his knees to his chest to stand! But at that moment, he laid back down and finished the wave on his belly.

As I grabbed the board and pushed him back out to Miranda, I offered him an encouraging word: “You can do it! You can stand!” My heart was racing.

Minutes later, Miranda pushed him towards the shore and began to chant. Once again, Andres planted his hands on the board, his shoulders and chest lifted off the board and he looked as if he was about to…lie back down.

So again, I grabbed the board and pushed him in Miranda’s direction. But just as Miranda’s fingers touched the foam, the horn sounded for the end of the heat. It seemed like that goal would have to wait.

Unfazed, Miranda grabbed the board and flipped it around. Her facial muscles, usually so relaxed, were constricted. Her eyes, wide and beautiful, were now narrowed and focused, as her tone became sharp and serious. Even above the roar of the ocean and the crowd, I heard her say, “Andres, this is the last wave. You have to stand up this time. Okay?”

Moments later a wave came, and as she pushed him into whitewash she began to chant: “ANDRES, STAND UP! UP, UP, UP!”

Hands planted, his shoulders and chest rose. His knees followed as he placed his two tiny feet firmly on the board with his torso lifted high. He was beaming as he barreled towards me and I could hear his parents going wild behind me on the beach.

Their excitement was nothing compared to Miranda, who charged towards the sand, kicking up gallons of saltwater and heaps of seaweed in the process. Seconds later, she had him in the air.

Waves of Healing: How Surfing Changes the Lives of Children with Autism is available for purchase in bookstores around the world, including Barnes and Noble, Wal Mart, Target, and online at Amazon. You can learn more about Surfers for Autism on Facebook.