My Unexpected Friendship with Bruce Brown 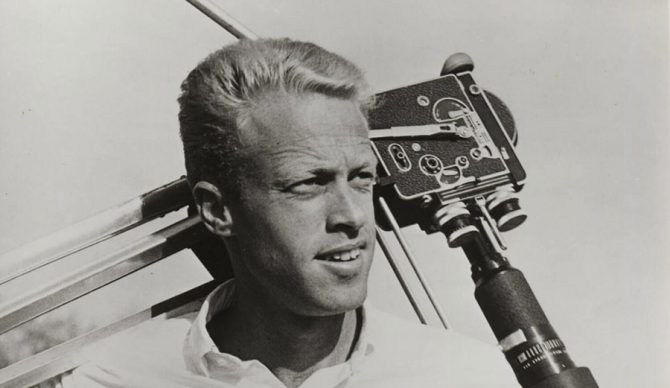 I remember the first time I was invited to Bruce Brown’s home. Heading south on Hwy 101, pulling up to his gate, driving up the long dirt driveway and walking across the lawn. Bruce’s cattle dog Rusty our escort, howling as we walked to let his master/friend know there was company. And there stood Bruce, cigarette in hand.

The first words he spoke to me were, “Hey, asshole.” That was my nickname for the next four years.

Now, I didn’t grow up in a beach town. I lived an hour and a half from the coast in Richmond, California. My mom would take me out to Stinson Beach in Marinas often as she could. By the end of the day, I was a shriveled prune, and I loved the ocean. On the car rides home I remember thinking, one day I’ll live at the beach.

Sometime around 14, I had saved enough money to get my first surfboard by mowing lawns and a paper route. My mom drove me to the surf shop in Mill Valley and I proudly purchased a Ben Aipa swallow tail single fin with yellow flames. This was 1984 and single fins weren’t cool, but I didn’t know that at the time. I just knew I was on the right path.

Fast forward to the few months before I met Bruce. I’m living on the Hollister Ranch, just north of Santa Barbara. I was at a barbeque one night and happened to meet Nancie and Dana Brown by chance. The spark of our twisted humor fired up an instant connection. Stories about Bruce were always on hand and being the voracious surf historian, I soaked them up detail by detail.

At one point I realized that these people, who had become my friends, shared the commonality of intense laughter, healing — a glue of sorts that could I understand.

Bruce turns, walks into his home and invites me in. He sits down at the head of the big dining room table and we all follow suit. His home is an actual museum of surf memorabilia. We talk about his time in the Navy on submarines and my time in the Army. I could tell he was trying to suss out what I was all about by throwing tests my way. And at the end of that visit, Bruce invited me back to shoot skeet with him. Thus began my friendship with Bruce Brown, the iconic filmmaker.

For years I went to the Browns’ for Thanksgiving dinner. These were the only times I saw Bruce tear up, voicing his thanks to the people present. The loss of his wife Patricia, or “Pat” as the family and those close called her, was still very painful. Another holiday without her. Bruce tells me that the only reason he started smoking was so that he could go into the market where Pat worked, and buy his cigarettes. That way he could see her every day.

One year, I didn’t make it to Thanksgiving at the Brown household. Sure enough, I got a phone call from Bruce. ”Hey, asshole. Who’s going to cut the turkey?!” That was Bruce in his own endearing way.

I never felt one tinge of arrogance from Bruce in the years I was around him. His stories were his life, he just happened to live an extraordinary one.

And I had my own favorite stories about him. Like the one about Bruce and Del Cannon riding brand new 1967 Triumph Cubs overland to Cabo San Lucas, all before paved roads in Baja. Bruce told me that at some point, one of the cameras he was using had fallen off his bike, unbeknownst to him. A couple hours down the road they had stopped for fuel and a rickety old pickup pulled up to ask if they had lost a camera. “Different times,” he said. “Different times.” 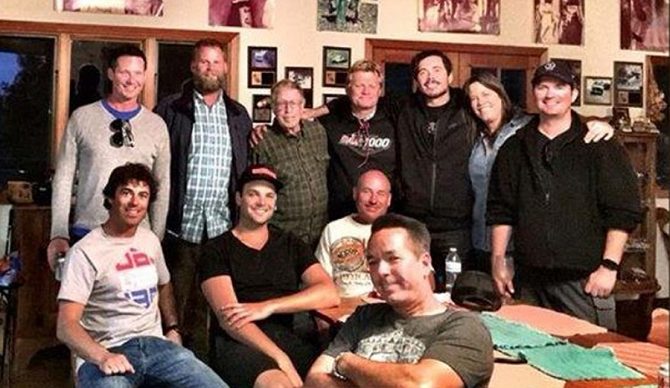 There were also the stories of Jose Angel and Bruce fishing for swordfish in Baja on Bruce’s boat. He’d show me pictures of Jose holding a massive fish that he had just dove 80 feet down to spear. And the great thing about these stories is they weren’t Bruce’s way of bragging. It was just the life he’d lived.

Of course, Bruce and I made our own memories throughout our friendship, like that first skeet shooting invitation. This became something that we would do regularly. He would order these beautiful shotguns, invite me over, and let me shoot them. It seemed he enjoyed watching others shoot his new guns as much as he enjoyed them himself. And so from that point on there were two things I always brought with me to Bruce’s house: M&M’s and clay pigeons. Bruce had a thing for M&M’s. The clay pigeons were for shooting, of course.

Bruce also collected and raced cars, both on and offroad. He flew large model airplanes, collected pocket watches, and rode motorcycles with Steve McQueen. He even once had a Princess visit him at his home in Dana Point. And yet here he sat, telling me stories, showing me rare footage of a short film he had shot in Baja — a month-long trip with two boats from Cabo to San Felipe and back. Some stories had looped around but they never got old. And it didn’t matter because that was part of his success and draw. He was a storyteller.

Now, if you ever came to the house after 4 pm you could expect the mischievous Bruce. This was the Bruce who, after a few cocktails, snuck out one night and threw a lit seal bomb under Wingnut’s van. Out came Wingnut to a hysterically laughing Bruce and Dana. Like father like son.

There were the times after eating dinner, small talk, and a few stories, that Bruce would just walk over to his chair and start reading with Rusty, his dog, at his feet. That was always our sign that the night was over. Nothing rude about it. Bruce was just a no-nonsense guy with certain things. And that was one of them that never ceased to make us all laugh. “Ok, see you later…”

I remember Bruce’s 80th birthday and I remember going to the hospital the very next day after his fall. I brought M&M’s to the ICU and I listened to Bruce repeat that he just wanted to get his hip fixed and get home to Rusty. I looked on as he was hooked up to all of these beeping machines and I could tell he was frustrated and uncomfortable. Bruce did make it through the first of two surgeries. I didn’t see him after that.

I left on a trip that Saturday. On Sunday afternoon, I received a phone call from Nancie. I knew even before I answered that it wouldn’t be good news. With great sadness, I listened to my friend tell me that her father was gone. I felt her heavy heart as she told me of his last few hours. And even as I write this last bit now, my eyes water up.

I’m so very grateful for the time I spent with my friend, Bruce. I feel blessed that he shared his stories, thoughts, and tears with me. At some point, Bruce Brown became just Bruce to me and I say that in the most respectful way possible. His stories and life inspired me in my own travels long before I met him. So thank you, Bruce. I do miss you dearly.