4 Tips For Your First Big Backcountry Skiing or Riding Mission 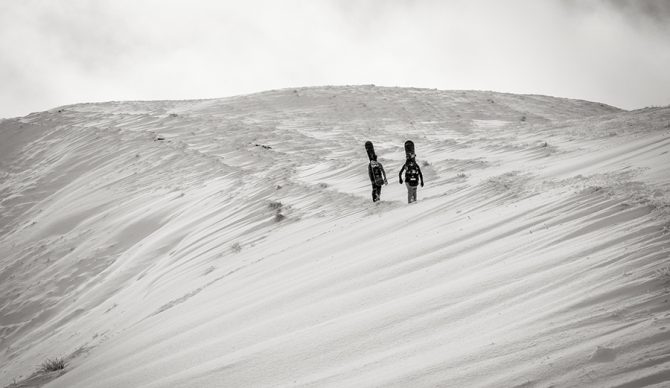 The first step to getting out there, is just taking the first few steps and committing. Photo: Nick Russill//Unsplash

For those in the know, there is still plenty of time to have an incredible time in the mountains. This is particularly true this year where many parts of North America have seen an above-average snowpack thanks to a late burst of spring precipitation. For the biggest of the big mountains, it means chasing some lines that are unattainable in the winter due to shorter days and unpredictable weather. So if you’re still getting after it, I salute you. And “getting after it” can simply mean stretching the legs with a quick skin. For those looking to make that foray in a more rugged sense, taking that step into uncharted terrain can often feel intimidating.

One of the greatest rites of passage in the life of a backcountry snowboarder (or skier) is that first unguided overnight trip.  I mention “unguided” because many folks spend their seasons touring the backcountry by booking a professional to handle logistics and deal with decision making. There is no shame in this, and I firmly believe that it’s better to go with someone who knows what they’re doing than to blindly venture out with ignorance. Guiding others is how I earn a portion of my living so I’d be a hypocrite to discourage this. But I’d rather consider myself an educator than babysitter. The end goal, in my humble viewpoint, is to help others grow the skills and intelligence to find their own way out there, and to do so while being able to come home and do it again the next opportunity. So to only ever go with a guide is selling oneself short – and I hope for all that one day the training wheels come off and each person begins their own personal relationship with nature without someone else making all the decisions for them.

When people self-assess themselves and feel they’re not ready to venture out alone, I often find that these potential adventurers are in a limited mindset. There are, of course, exceptions but they are of the few. For those who are cautious, I say that a bit of fear is a good thing, but too much will prevent you from a beautiful relationship with mother nature.  And it’s not an all-or-nothing equation: it’s still valuable to hire a pro when stepping into bigger terrain than you’re comfortable. And only by expanding the comfort zone do we grow.

So with that in mind, the following is a toolkit for enabling more success when you do decide to cross that line into the unknown. Whether it’s your first season exploring the backcountry or the tenth, the first time out in the lead is always daunting. Hopefully these tricks will help it feel less so.

Train Past Exhaustion, Then Train More

I’ll get it out of the way – training isn’t fun. Anyone who says it is is probably doing it for the ‘Gram. Sure, the results are amazing and worth every second of pain and sweat — but getting the motivation to train for an activity when it’s not the activity itself can be tough. It does get easier once you spend a few years out there and realize the difference in how it feels being stuck on the side of a steep wall where the wrong move could result in a catastrophic accident. And the only thing keeping you from said accident is the sharpness of your edge and your ability to hold that edge. That scenario has happened to me before. When the shakes came, I wish I had spent a bit more time in the gym. Nowadays I’ll do what I can to make sure that I can support whatever situations — premeditated or not — with enough energy and stamina to feel safe.

So be sure to train (cardio and strength), and train past the point of when you don’t think you can do so anymore. Of course, allow for plenty of rest and recovery afterward, and don’t forget to stretch. But you don’t want to find out where your limit is in the backcountry. There are too many variables. So train hard, with intention, close to home and you’ll be all the better for it when you get out there. 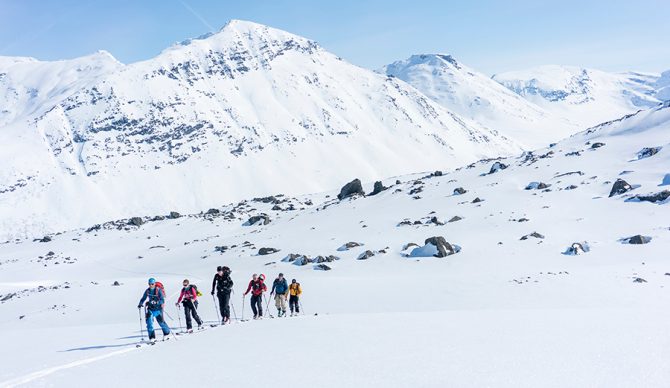 Trust yourself, not the group mentality. Photo: Hendrik Morkel//Unsplash

Understand the Difference Between Knowledge and Instinct

This is a big point that I can’t stress enough, especially in this day and age where we have the world’s catalogue of information available at our fingertips. Somehow along the way the backcountry community became obsessed with data. People want to share beta on their routes and know every single detail on what’s out there before they go: from how much it snowed last night to the speed of the wind and what direction it came from, to pretty much every other detail that could lead to more knowledge on what’s out there before actually going and experiencing it. This isn’t essentially a bad thing on its own, but can be dangerous when used as doctrine.

Although we now have more access to knowledge than ever, people continue to die out there. It’s not just beginners, either.  Oftentimes it’s ego that gets people killed when they try to make decisions based on human factors – known in the backcountry world as “heuristic traps.” But the reality is that there are many things out there that you can’t predict, no matter how many models, tests, or how much analysis you or your group has done.

So instead of relying on objective knowledge, I always advocate for relying on instinct first. What is that, you ask? Well part of the point is it’s not something you can really articulate in words.  It’s that gut feeling telling you whether or not a decision is good. It’s the type of reasoning that can’t be put into words or formulas. You just know.  And usually it comes fast and sudden, steering you out of danger when something changes out there such as a temperature or pressure swing. Acquiring a more dialed instinct only happens with time out there listening, and learning. The younger someone gets out there the quicker it comes. So if you’re older than 30 or so and are beginning your backcountry journey, it might be wise to rely on those tests and models until the senses are further tuned in. But the key is not to listen to one or the other – it’s to comprehend the difference between knowledge and instinct, and to know when to apply them.

Carry a Backup for the Things That Matter.

These days most equipment is pretty reliable, most of the time. Such reliability is almost a double-edged sword, as it causes us to let our guards down. Then one day that key piece of equipment doesn’t work. Depending on what it is and where you are, it could be a hell of a time trying to get back to civilization. That’s why it’s always necessary to have a spare for the really important stuff.

The big ticket is bindings – whether skiing or snowboarding, if you lose even the smallest piece of your bindings, the whole damn thing probably won’t work. So a spare kit is more than essential. Not only that, know how your bindings work and how to fix them when they don’t. It’s a real bummer having to post-hole back to the cabin, road or wherever you can fix it, no matter how short or long the trek back may be.

Other incidentals take some experience to understand. Batteries are always a given but not just a few. Chances are a friend will need a spare and you don’t want to rely on them to replenish. Or a spare skin. That’s your mode of transport. Don’t let them fail.

But perhaps one of the biggest expendables out there, especially this time of year, is socks and long underwear. If you fall through the snow into a pool of water or a creek, not having spare socks or long johns will result in hours of discomfort (or worse). So load up your pack with the spares that matter, and avoid an unfortunate inconvenience from turning into something worse.

Learn to Love Each Aspect of the Journey

Clichés are cliché for a reason, but we often tune them out if we hear them too often. But now that I have your attention, the journey truly is the destination when exploring the backcountry. Too often people become preoccupied with a single objective and staking their claim. Or maybe it’s a personal goal to summit X peak or crush X line with no fanfare whatsoever. Still, I argue that objective-based travel misses the point entirely. When you add it up, the time spent on a peak or gliding down a face is but a small fraction of the time in the backcountry. While these moments are often some of the best of the trip, they are but only moments. Once perspective shifts away from the need to accomplish any goal or set of goals, the mere act of being in the wild away from other humans becomes the objective in itself. When that happens, expectations dissolve away and you gain a sense of presence that can’t occur when trying to tick boxes or capture something on camera. It took me a while to realize this and I hope this humble revelation will save time for others to figure it out much sooner. But the reward truly is the fact that you even made it out there in the first place. Feel lucky. Feel appreciative.

Editor’s Note: Interested in safely riding untracked powder in the backcountry? There’s a lot to learn. In his introductory course, Nick Russell’s Guide to Backcountry Basics, big mountain snowboarder Nick Russell shares a lifetime of knowledge and information essential to begin your journey in the backcountry.