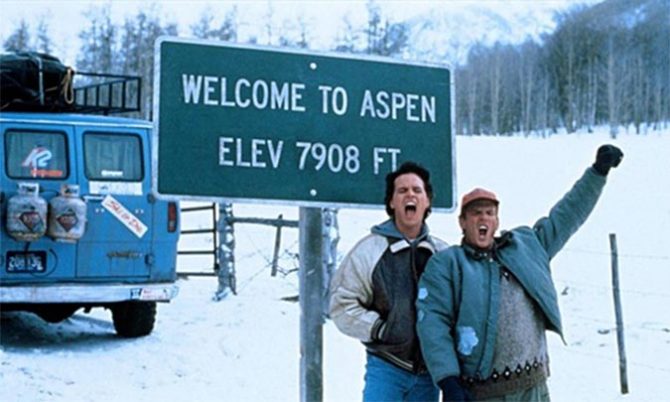 The bum life is the good life. Photo: Aspen Extreme

There is a certain glory that is only bestowed upon the dirtbag, the die-hard, the ski or snowboard bum. You know them when you see them: duct tape holding together their mangled gear, disheveled hair, and often seen emerging from decrepit vans that serve as a winter-long Shangri La.

Skiing and snowboarding is no doubt a costly pursuit, one mostly associated with affluence, but for the diehards, there is a way to not only ski and snowboard on a budget, but to bank more powder turns than a jet-setting investment banker taking heli bumps out of Valdez.

This is going to take some sacrifice, and might border on being illegal, but well-behaved powder hounds rarely make history, and you have a legacy to cement here. From personal relationships to well-balanced meals, everything should take a back seat to the singular focus of riding as much powder as inexpensively possible this winter.

Live In Your Car

You drive in it, possibly hot box it, and you definitely have tried to catch air in it, but now it’s time to make your car your semi-permanent abode. This obviously works best if you have a van, truck, or if bestowed with a trust fund, a Sprinter, but it can be managed in a more compact vehicle if you’re willing to suffer. Living in your car offers a number of benefits, the most important being that it eliminates the high rent and lodging costs often associated with resort towns and it’s mobile so you can chase pow.

There are some drawbacks as it will be freezing cold if your vehicle isn’t insulated or is without a heating source. Going to the bathroom can be a real nightmare, and the possibility of a romantic fling with anyone other than another responsibility-dodging diehard is all but out of the question. You’ll most likely have to skirt the law if you make your car your winter home as many people in highly affluent areas don’t take to kindly to vagabonds and drifters mucking up their winter wonderlands. However, there are a number of resorts that won’t mind if you call their parking lot home so you can score fresh tracks each morning.

Extreme Diehard Tip–If you’re a real psycho you can live in a tent. 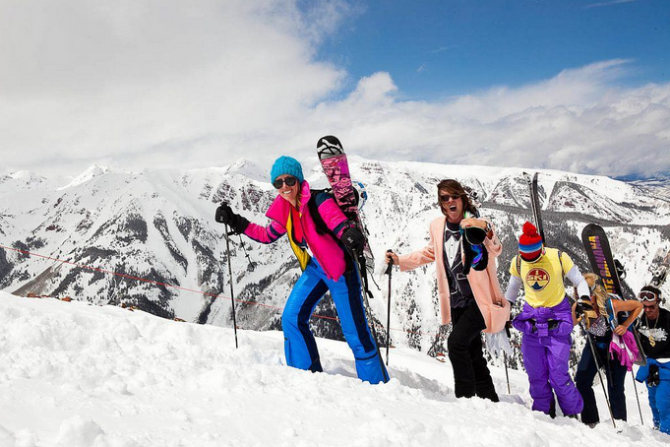 One of the greatest pleasures in skiing and snowboarding is earning your turns. Sure you can get fat and spend all your money riding resort chairlifts, or you can hike, skin, or snowshoe your way to the top of the mountain for free. While most people that enjoy earning their turns prefer uncrowded backcountry terrain, a dedicated few will wake up at dawn, skin to the top of lift-accessed terrain and wait for first chair before dropping into an untracked canvas only to sear a red-hot powder turn for all of the non-core, gainfully-employed suckers that paid $80 (or more) for a lift ticket pondering with befuddlement as they surely thought they were getting first tracks. Avalanche safety equipment and knowledge is paramount.

There was also a time when you could befriend a cat driver by supplying them with a rack of Coors Light and catch a diesel-powered ride to the top before the lifts started cranking, and while the corporate takeover of North American ski resorts has certainly put a damper on the practice, there are many non-corporate resorts that may employee cat drivers who are susceptible to bribery.

Extreme Die-Hard Tip–If you’re willing to dance with Johnny Law you can clip tickets, even though we definitely don’t condone that. 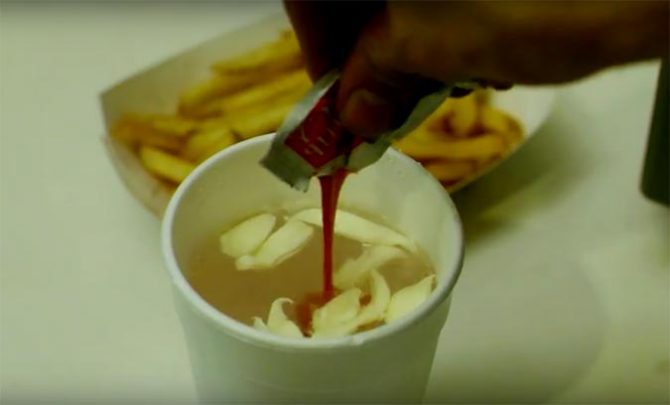 Paying $15.00 for a hamburger should be against the law, especially the soggy and poorly-cooked variety you’ll find at any ski resort. While resorts charge an abnormal premium for mostly terrible food, this price jacking is pretty common at all the restaurants located in mostly affluent ski towns, so you’ll definitely want to pack in whatever it is you plan on eating. Just because you aren’t going to be rubbing shoulders with ski town elites at the latest artisanal toast shop doesn’t mean you can’t eat well on a budget.

First off, hit every ski and snowboard video premier you can this winter. Many of these events are sponsored by overpriced energy bar companies and will have free product, so jam as many as you can into your pockets at every event as they’re usually packed full of healthy energy-sustaining ingredients. You can also hit your local big-box discount store and stock up on healthy and relatively affordable goods such as instant oatmeal, nuts, dried fruit, and granola bars. These staples will keep your body charged so you can charge non-stop on powder days.

Extreme Die-Hard Tip–If you’re riding a resort, or near a resort, stop into the lodge and mix together ketchup, hot water, and free cracker packets for a terrible-tasting, but semi-satiating, tomato soup. 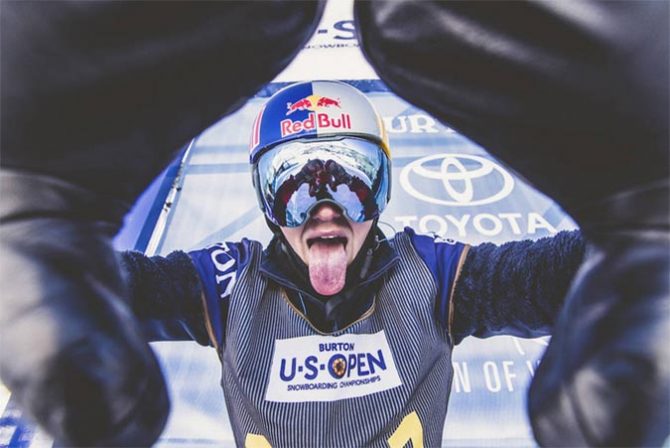 Your success depends on making this guy your bro. Immediately. Photo: Red Bull

Bro deals are like pro-deals for people without jobs. While most major brands will roll out gear to ski and snowboard industry folks at a hefty discount, the bro-deal requires you know someone who either works for, or rides for, said brand. Lucky for you almost every major ski town has a few sponsored riders and it’s almost certain that they are broke and willing to sell gear to pay their rent.

If you don’t know anyone who is sponsored hangout by the terrain park for a few days. It’s almost always immediately obvious, as it will be the loudest and most heavily stickered kid spinning over 720 degrees. Approach said person in the parking lot, pass them a beer and a puff on your magic ganja stick and offer them some fast cash. If they don’t have any extra gear they are willing to part with they will almost certainly know someone who does.

Extreme Die-Hard Tip–Submit yourself to some sort of internal organ donating scam so you can afford adequate gear. 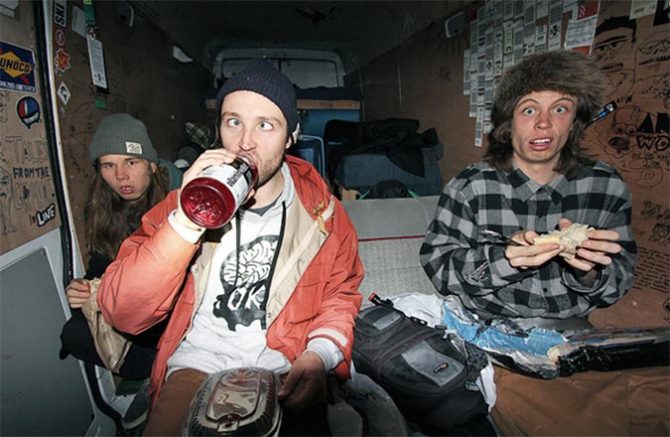 Be the Life of the Afterparty

It’s easy to blow through a load of cash when the whiskey is pouring like water and the dance floor is on fire. However, over indulging at the bar post powder days is one of the best ways to deplete your winter riding budget and many inexperienced storm chasers have had to tuck their tails between their legs and run back to the real world due to poor party management. This doesn’t mean you can’t party, it just means you have to be strategic about it as you should be allocating your funds towards riding powder.

First and foremost, avoid the bar at all costs. You’re living in your car so make sure you’re parked somewhere safe and enjoy some brewskis in the back, aka your living room, while everyone else is enjoying a night of pre-debauchery and just as everyone is heading out the door, post last call slide on up to the congregated crowd and get some beta on the afterparty. Usually, the afterparty will be stocked with free beverages and you may even meet a suitor who will let you park your van in their driveway for a few nights.

Extreme Die Hard Tip–Brew jail-style bathroom hooch so you don’t have to spend money on booze.