A Splitboard Traverse Through the Largest Roadless Area in the U.S. 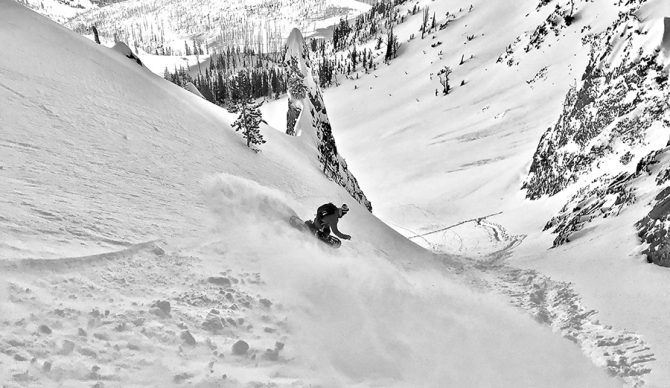 Editor’s Note: Author Sam Thackeray is the lead avalanche instructor in our Essential Guide to Backcountry Basics and Avalanche Awareness with Inspire Courses. He helps viewers learn to make smart, safe decisions on their quest for untracked powder. The class is currently on sale for the Holiday season. Find out more, here.

Brian is the kind of guy with overwhelming enthusiasm and positivity. He’s especially stoked on skiing, and tenfold on skiing in remote, wild places that involve a lot of slogging and suffering. Ultimately, that’s the kind of personality you want in a partner for the kind of trip we are about to embark on: a 16-day traverse, covering 130 miles and 67,000 vertical feet through the largest roadless area in the Lower 48 states, the Frank Church Wilderness.

I can’t remember where I met Brian. Maybe forecasting for the local avalanche center or through Payette Powder Guides, or maybe at a local event. Regardless, we’d skied together several times the last few seasons. Last spring, we linked up to ride a local classic to our McCall, Idaho home. And Brian invited his friend Jess.

Jess is mellow, friendly, thoughtful, a bit of a philosopher, and as fit and strong as they come. An ultramarathoner and ex-climbing ranger of 15 years. Brian skis in the backcountry most days of the week – an average day for him is 6,000 vertical feet. Jess trains endurance six days a week.

I was fit and strong from a season of splitboard guiding and have put in my share of days in the mountains; but I’m still the weak link. Snowboarding has driven my life since I was eight years old. I’ve developed a thirst for remote, obscure, adventure that involves a fair bit of suffering. A coworker once told me, “You’re a mental and emotional juggernaut.” I’m not exactly sure what he meant; I don’t think it was a compliment. It’s probably that quality that led me to think a ski traverse of the Frank Church Wilderness was not only a good idea, but might actually be fun.

So, on that day last spring, as the three of us slogged our way up a skin track, I mentioned that I’d been thinking about trying to splitboard across the Frank Church.

“I’ve been thinking about a trip like that too!” Brian responded as he launched into a detailed description of all the peaks he wanted to ski. Jess was intrigued by the idea. He’d run trails and rafted in “The Frank,” but had never skied there.

So what the hell is the Frank Church? At 2.3-million acres, it’s the largest wilderness outside of Alaska. It spans a significant part of Central Idaho and is bordered on all sides by thousands more acres of National Forest and other wilderness. It’s home to several of the country’s greatest multi-day whitewater trips thanks to the Salmon River that runs its length, the second deepest canyon in North America, herds of elk, deer, big horn sheep, black bear, wolves, wolverine, cougar, osprey, bald eagles, salmon, trout….and not much else. Set aside in 1980 by Congress as a part of the Wilderness Act, it’s named for its champion, Idaho Senator Frank Church, who risked his iconic political career to see this area set aside. In full, it goes by The Frank Church-River of No Return Wilderness, but to those who hold it near and dear, it’s “The Frank.”

The statistics don’t do the place justice. There’s a mystique there that’s so wild, so remote, so unforgiving, so uninhabited. And that is the attraction. 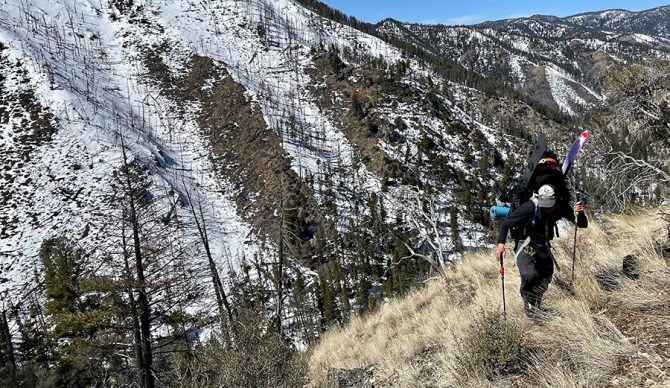 So we hatched a plan to ski, and snowboard in my case, from west to east across the expanse of The Frank (from Yellow Pine southeast of McCall to Panther Creek near Challis), descend as many beautiful ski lines as we could, and just explore what was out there. Sounds pretty simple, right?

In any good adventure, plans are in a constant state of change. In the middle of our planning process, we learned that an avalanche had blocked our access road and the county wasn’t planning to clear it until late spring. Ok, no problem, just add a day and 15 miles of travel. The day we were leaving, I pulled up to Brian’s house to pick up him and Jess and was immediately confronted with news: the flight company who was resupplying us wouldn’t be able to land at our planned air strip due to poor conditions. Instead, plan B took us further south to a different strip and more time walking on dirt. No big deal, we were fully committed.

We pulled up to where we would leave civilization with two machine operators slowly working on clearing avalanche debris. With a lot of grunting and moaning we shouldered our 65-plus-pound packs, waved goodbye to our friends, and, one foot in front of the other, headed east.

Our ability to make adjustments to plans based on what the mountains gave us played a major role in our success. The second morning provided us the opportunity to make an unplanned adjustment to climb and ski a couloir which would prove to be one of the most aesthetic lines of the trip and undoubtedly the best snow. So, we took full advantage! It wouldn’t be the last time we made an adjustment. 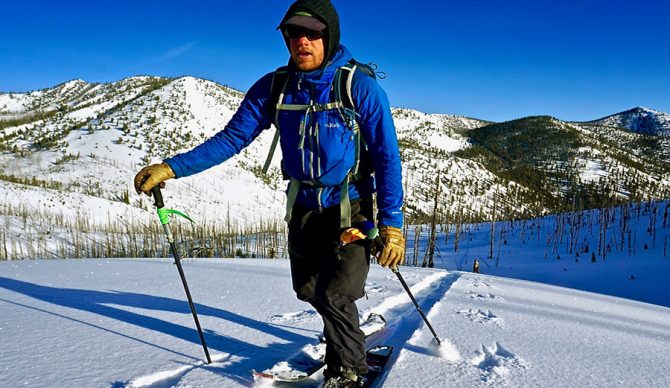 This gorgeous, tight line set a tone: ride for a morning or a day, then move camp. We stuck to this routine as much as possible, but the terrain didn’t always lend itself to this ideology. We ran into days of slogging. Sixty-mile an hour winds that left trees scattered like toothpicks across the mountains. Regenerating lodge pole pines so thick, riding through them was concerningly difficult. Terrain so steep and snow so icy, skinning was impossible, but unconsolidated enough as to not support our weight while boot packing, leaving us sinking into our waists with each step. Logs and sharp granite, which created obstacles that threatened to destroy equipment (and ACLs). Ego-shattering ski conditions riding with heavy packs. Dense brush and creek crossings that tore at our clothing and slowed our pace to a crawl. Long days of walking on rock and dirt with all of our possessions on our backs, bringing our packs to 80 pounds.

Each obstacle took a toll. I damaged or destroyed nearly everything I brought. The worst being breaking the baseplate of my splitboard binding on day 12. As an essential piece to move in the mountains at any capacity, I had to get creative. I splinted it with sticks and rubber Voile ski straps, which allowed me to complete the trip, but brought an end to my ability to confidently snowboard anything of consequence. 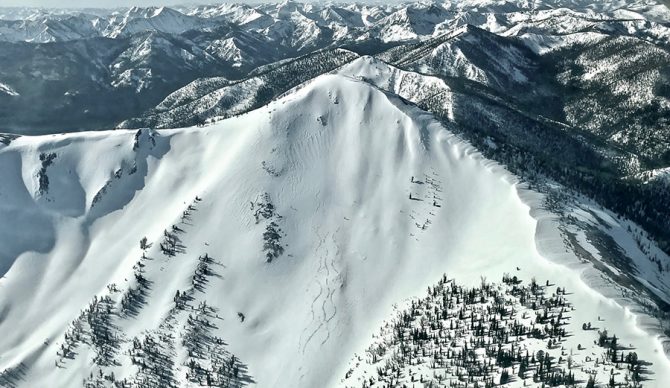 What the challenges never did was break our spirit or positivity. Undoubtedly, we all went to dark places at times as we were being pushed physically and mentally during those 16 days. But no one cracked, no one melted down. At some point, the position you have put yourself in is so ridiculous, you just have to laugh.

Don’t get the wrong impression, it wasn’t all beatdowns. We made 10 notable descents, each with its own distinct character. The aesthetic and five-star snow in Murphy’s Law Couloir. The thrill of ripping giant turns on the open face of Rainbow Peak. Riding straight to camp after picking my way down the Nautilus Chute and then looking back up the face that easily held ten more lines. Party skiing the low angle burn into Brush Creek, which seemed to go on forever. Riding off the summit of the tallest peak in the range. Brian’s absolute stoke and gratitude after riding the Lucky 13 Couloir. Highlights I will not soon forget and each made sweeter knowing it may be the only time I ever ride them. 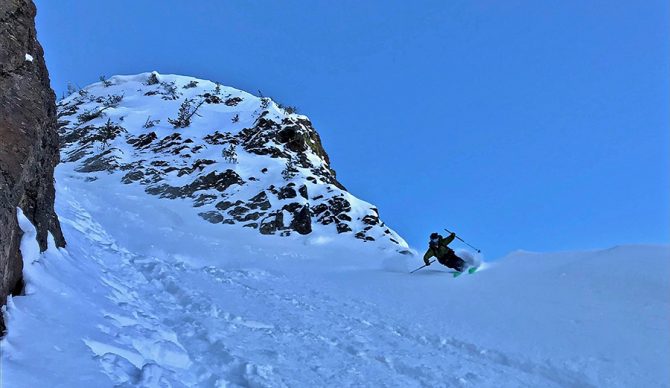 Ultimately, the traverse took every bit of those 16 days. The numbers, however, are insignificant. The growth, learning, appreciation, and experience was not.

When leaving on a trip like this, you don’t know how it will affect or change you, but you know that it will. This trip was about gratitude and legacy.

Gratitude for the mountains, the rivers, peaks, valleys, and lakes; the place. Gratitude for the friends, family, girlfriends and wives, the ski partners. Forefathers with foresight to set this place aside as, “A place untrammeled by man, where man himself is a visitor.” And those who continue to manage it as such. Gratitude to live in a time and place where this is possible. To be of such social and economic status to be able to undertake such an endeavor. To have the choice to push ourselves and suffer, not be forced to. The luck. 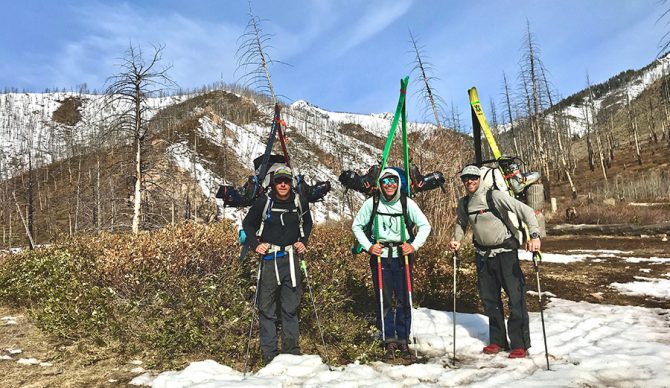 The Frank is the legacy of millions who came before. Lawmakers and activists who sought to see it protected. The hunting, fishing, and river guides who’ve built their lives around sharing it with others and stewarding the land. The miners and mining companies who have scarred the land and poisoned the fisheries, through no intent of their own. A different time, different ethic, different knowledge. A forest management ethic that pushed wildfire suppression, which in turn led to previously undocumented fuel loads and wildfire activity. The Native Americans who lived off the land and rivers, who had a more intimate knowledge of place than we could ever hope to. The intrepid adventurers who have attempted, and succeeded, on similar trips. All have had their impact.

As we passed through, we wondered, what will our legacies be?