Honnold reveals more of himself in Free Solo, which makes the movie great. Photos: National Geographic

From the establishing shots of “Free Solo”—Alex Honnold climbing rope-less thousands of feet above the ground on El Capitan in Yosemite Valley—the drama is easy to understand: if Honnold falls off that rock, he dies.

In that respect alone, Elizabeth Chai Vasarhelyi and Jimmy Chin have made the most compelling rock climbing documentary of all time. Of course, Honnold’s free solo of El Cap in June of 2017 is mind-blowing and fantastical to rock climbers as it will stand as one of the sport’s greatest accomplishments ever. This film, however, takes the sport beyond itself and into the minds of the general public in a way that no other climbing movie ever has, tackling the heady subjects of death, drive, and happiness with care and finesse.

The film is gorgeous, with Chin’s top-notch rope skills and knowledge of Yosemite offering a detailed visual guide to the most famous chunk of rock on the planet, but what really makes the film vibrate with humanity are the honest and careful depictions of Honnold’s personal relationships.

Tommy Caldwell, a modern climbing legend and frequent climbing partner of Honnold’s, speaks most eloquently on the risk his buddy takes when doing these un-roped climbs, admitting that of his friends (of which he says he’s lost 30-40), Honnold is, “the most likely to die next.” Despite that, Caldwell helps him prepare for his groundbreaking climb, “because he’s going to do it anyway.”

Sitting in the van he lives in, Honnold chats with Peter Croft, one of the most prominent free soloists of the previous generation. Croft is more reserved about his climbing and says that while he soloed the Rostrum (another famous Yosemite route) 50-60 times, he never succumbed to requests to film it because he felt like they were his own sacred, personal experiences, that filming would change the reasons to do it. 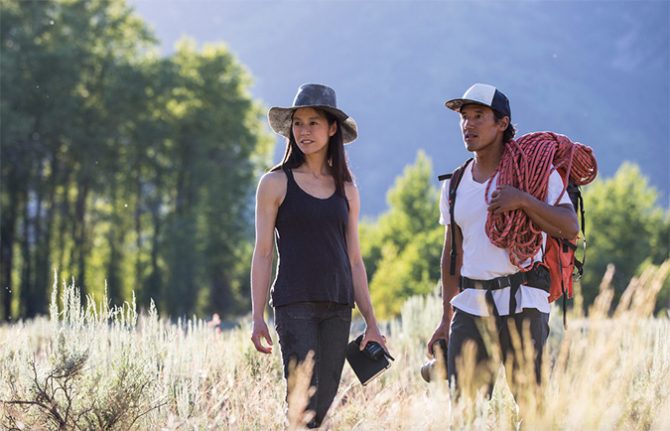 Jimmy Chin and E. Chai Vasarhelyi, on the job.

Although Honnold insists that he’s still working on El Cap “for the right reasons,” the pressure of a film crew being there still gets to him. On his initial attempt, he gives up six pitches into the 31-pitch Freerider route, claiming that he didn’t feel comfortable with everyone watching. This leads Chin, who’s been filming Honnold climbing for a decade and is a close friend, to question the project altogether. Is making a film worth it if your friend, the star, dies in front of you while you’re making it?

The human side of Honnold is further revealed through his budding relationship with his girlfriend, Sanni McCandless. Over multiple interviews and candid conversations between the two, she’s communicative and clear-eyed about their relationship but she doesn’t fully understand Honnold’s drive to accomplish his very risky goal. He’s unflinching in pursuing it and is clear about his commitment, often being callous toward her, yet over time, he softens. This is a depth and intimacy that we’ve never seen from the climbing superstar and it paints him as more human, more fragile than imagined.

As he gets nears his goal, it becomes clear that the film is about these personal costs of pushing the limits of human potential. Honnold grapples with this as the story continues, but that doesn’t prevent him from walking to the base of El Capitan and starting to climb.

Chin and crew did a magical job of portraying his movement up the great stone. Not only does the viewer feel like they’re following Honnold through a vertical maze, but the shots are stunning: Honnold’s feet smearing on minuscule bumps, his hand pinching a large block, the insecurity of the hardest part of the route and the quiet, “Fuck, yeah!” he mouths to the unmanned camera that captured him getting through it.

During the climb there were plenty of people in the theater I was in—climbers and non-climbers alike—literally on the edge of their seats and as I overheard one woman say after, “I’ve never had a movie make my palms sweat before.”

And just like that, Honnold is standing on top of the 3,000-foot tall El Capitan, victorious. He says he’s, “So delighted,” twice and can’t lose his goofy grin. He calls McCandless and tells her he loves her, for the first time we’ve heard.

Whether one agrees with the risk of the accomplishment and his choosing to pursue it, what the movie captures is a triumph of humanity, one that both climbers and non-climbers alike can understand.

“If you’re seeking perfection, free soloing is as close as you can get,” Honnold says. “And it does feel good to feel perfect, for a brief moment.”

And this film does his perfect feat justice.

Find a screening near you, here.