Andrew Harris, the First Person with Down Syndrome to Climb the Grand Teton, Is Raising Money for a Film

In 2017, when Andrew Harris climbed Wyoming’s towering Grand Teton with his brother-in-law Max Hammer and his sister, Amy Hammer, becoming the first person with Down Syndrome to make the 7,000-foot climb, he inspired the entire mountain community. Harris had plenty of obstacles to overcome along the way, not the least of which was the strenuous trek to the top. During his climb, there was a serious accident near the summit where a climber in a separate group was injured.

Now, Hammer, a professional skier and guide, is working to direct a film about the adventure. And it’s sure to inspire. “I’m directing the movie and will also be acting alongside Bob,” he told me. “Our production studio is called Houseplant Creative which is myself and Gray Thompson. We are a small production team and will be contracting out the best filmers, audio team, and actors we can assemble. We will have a cream of the crop team working together under my vision.”

While the film is certainly a good story for others to enjoy, Hammer says it’s mostly for Andrew, also lovingly known as “Ducky,” with a brilliant working title: Ducky Goes Up. 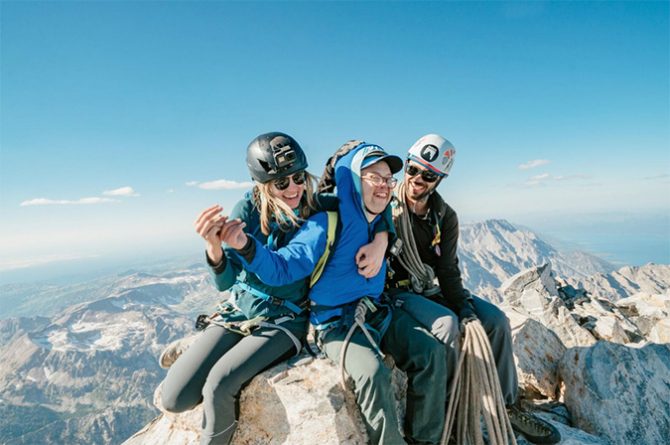 The Hammer/Harris clan at the top of Wyoming’s Grand Teton. Photo: Julie Ellison

“The most important aspect is that this is a movie FOR Bob, not about him,” Hammer said. “My goal is to reinforce ideas around eating habits, exercise, and time outdoors so that he can lead a healthy life. Of course by speaking directly to Bob, we also hope it will speak to others with Down Syndrome and inspire those folks to lead healthy lives.”

Hammer is trying to turn the tables for people with DS, as many are susceptible to being influenced by pop-culture, that, quite frankly, seems to promote stuff that isn’t that good for any of us. “Bob is stoked to make a movie! Every time we shoot anything he has a blast. He is a total ham for the cam,” Hammer says.

The Hammer/Harris clan is working to raise funds to make the film happen and just initiated a Kickstarter campaign with the film due out in 2019. It’s definitely one of those films that’s screaming to made.