In early December of 2019, a group of eight professional riders, filmers, and photographers from the Jones Snowboard Team ventured out into the Donner Summit backcountry a night before the start of what would be a three-day avalanche rescue course refresher. They stayed at a hut and woke up early the next morning for a sunrise shred session before the rest of the team was scheduled to arrive. The team had no intention of testing their rescue skills before the course had even started.

“We knew what the red flags were,” says renowned snowboard photographer Andrew Miller, “but we felt really good about everything and were being pretty cautious.” The Mammoth-based lensman who has spent over a decade shooting snowboarding is no stranger to avalanche encounters and close calls from scary big lines in Haines, Alaska to Norway to Mt. Baker. However, this instance was different…it involved a full burial and an intense rescue of his friend and fellow image-maker, Greg Weaver.

Last week, Miller, along with others who were there, released a video on the incident. It shows Weaver riding a slope in what looks to be good snow conditions when, in terrifying fashion, the slope gives away, burying the veteran videographer. Miller was the last snowboarder on the ridge waiting to drop in when he witnessed the avalanche propagate and completely bury his friend and colleague. He immediately went into action along with the rest of the crew that was spotting Weaver (hear their reaction in the video above). “It felt completely fake, as I was going down the chute on the bed surface with my beacon out in search mode, I had to keep reminding myself this is real…this is real,” recounts Miller.

To this day he still has the image imprinted in his brain – his friend  buried headfirst under the snow with his arms pinned behind his back and his camera bag lodged over his head.  “It was crazy, we got so lucky,” Miller recounts. “A lot of things miraculously happened.” For Miller he couldn’t even imagine how bad the the incident could have turned out. They got to Weaver, digging deep into the snow and reaching him in four minutes just as he’d passed out. They were easily able to revive him. Things could have been incrementally worse. “I just remember telling everyone I loved them and I was so thankful for everybody there,” Weaver said.

While the incident weighed heavy on the group for about a year, they eventually decided to create a video with the entire storyline of the incident and the rescue as a way for the group of riders to bring awareness to the public about the risk of avalanches and the uncertainty that comes with backcountry skiing and riding. “For us it has almost been therapeutic,” says Miller. “It allowed for a little bit of closure.”

Miller also says  the response has been generally positive and he hopes it can inspire those who have had close call’s in the past to share what they have learned without feeling any shame or guilt. “Perhaps it can help to bring an open forum for people to be able to talk about mistakes and not just gloss over them,” he points out. 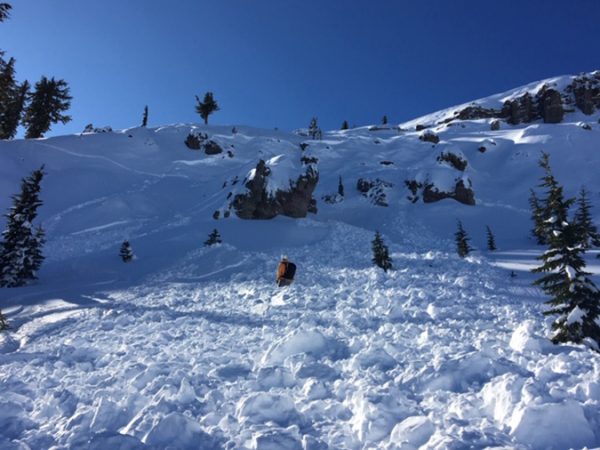 Looking up at the avalanche that buried Greg Weaver. Photo: Andrew Miller

In 2020, the United States ski and snowboard industry has seen a huge uptick in backcountry gear sales with many brands selling out before the 2020-2021 season. The big shift has also seen an insurgence of avalanche awareness education and accessible information for the public. Miller points out that the timing seemed right for the video to be released when it was and he hopes it can be beneficial for the public to watch.

“I just hope people can watch it with an open mind. In this day and age it can be so easy for people to quickly judge,” says Miller. “Put yourself in the situation because it can happen to anybody in the backcountry.”

While the video offers a raw glimpse into the spookiness of an avalanche rescue it also shares why it’s so important to be prepared and dialed in with your rescue training because in an instant, it can become everything.

“Ultimately the reason the outcome was positive in this situation was because of our training,” says Miller “Get out and practice as much as you can with your partners. This stuff should be burned into your brain and should come as second nature.”

Ride to live another day.

Editor’s Note: Learn to make smart, safe decisions on your quest for untracked powder in the Essential Guide to Backcountry Basics and Avalanche Awareness with splitboard aficionado Nick Russell and avalanche instructor Sam Thackeray supported by White Claw. The Inertia readers save 10% with code INERTIA10.