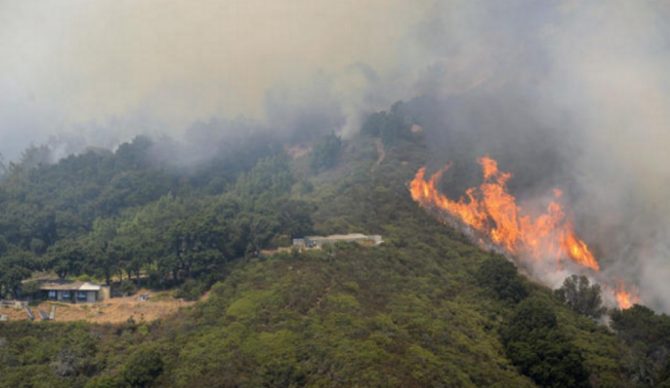 Surfer Don Curry is among those who have lost homes to the raging Soberanes fire. Photo: L.A. Times

Big wave surfer Don Curry’s home was among the scores of buildings scorched by the raging Soberanes fire in Monterey County. Curry, known for his fearless approach at places like Mavericks and Ghost Tree in the 2000s, safely left his Palo Colorado house before flames consumed it on July 23.

“The fire sounded like a jet engine getting ready to take off. It was so intense and hot,” Curry told the Santa Cruz Sentinel. “I knew my place was toast. It was time to go.”

What began as an abandoned illegal campfire has, since July 22, set ablaze more than 80 square-miles in the hills above the Big Sur coastline south of the Monterey Peninsula. It has ripped through 60 homes and 15 other buildings. Sadly, the fire also took the life of a worker helping to fight the blaze. Firefighters told the press on Thursday the fire was barely one-third contained.

Hot and dry conditions set the stage for the inferno and the steep, remote terrain has made it difficult for firefighters to contain it. Elevation has played a part, too. The fire is raging in coastal mountains up to 4,000-feet tall, well above the marine layer which would have a dampening effect.