Burton’s Donna Carpenter Is Changing the World: “Gender Equality and Sustainability Are Freedoms Worth Fighting For” 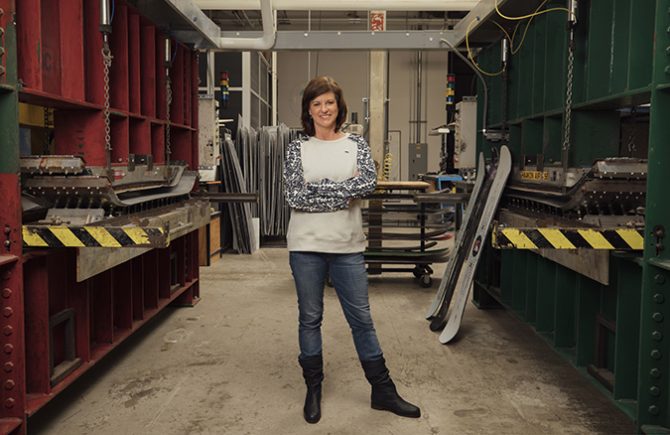 Donna Carpenter, a visionary with a plan. Photo: Jesse Dawson

Talking with Donna Carpenter, you’d have to be lacking a pulse to come away uninspired. The Burton CEO famously met her husband Jake Burton Carpenter on New Year’s Eve, 1982, at a bar in Vermont five years after he’d founded Burton Snowboards. Thus began one of the most powerful partnerships in the history of outdoor sports. While Jake led the way on the product side, Donna slowly took over the business end and now runs the company with a powerful vision of inclusivity and sustainability, both of which work together for profitability. And her vision has not gone unnoticed. “Donna is an inspiration to the outdoor industry,” Patagonia President and CEO Rose Marcario told us. “She is a straight shooter, with tremendous passion for outdoor sport and for inspiring and leading women and men in our industry. She uses her role as a leader to make us all better.” I had the opportunity to catch up with Carpenter as Burton heads into its summer season on a serious quest to become a four seasons brand.

Burton seems to have expanded broadly from its core business of making things to ride on snow. Can you talk about that?

It seems like a smart business move given the media reports of the snowboard industry’s pending implosion. What do you think of those reports?

I think there was a little schadenfreude in that. A lot of people always wanted to think of snowboarding as a trend and fad that was going to go away. We dug into those numbers: the macro trends of climate change and very low snow years combined with the economic crisis hurt us disproportionately. Those (customers) with less wealth, making under 100K, were hit harder than those making over 100k. So younger people were hit harder. The drought also hit us disproportionately hard. I think the story of our demise was premature. 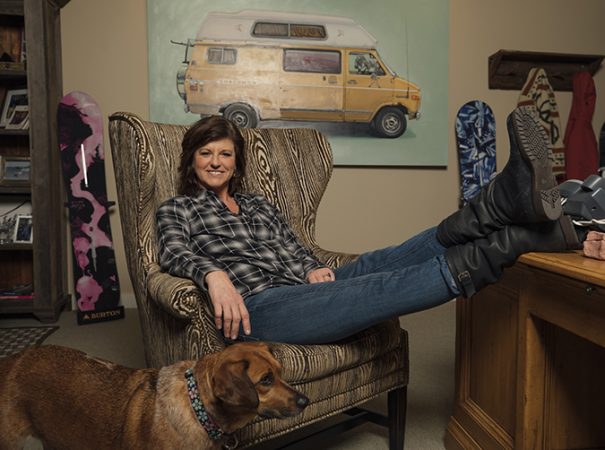 Carpenter is definitely in a good place. Photo: Jesse Dawson

Burton has certainly been at the front end pushing snowboarding as a sport, discovering transcendent talent like Shaun White and so many other incredibly gifted athletes. Do you think Burton has found another Shaun White?

What makes an athlete transcend their sport like Shaun did, where you appeal to a mainstream audience? I don’t know if you can cultivate that. But I think it’s happening with Chloe (Kim). She’s an incredible personality as well as an amazing athlete. And social media, if people are good at it, they can develop an audience. We have a Chinese rider, Liu Jiayu, who’s a combination of amazing personality and charisma with incredible athletic talent. Her appeal is real. I think those two have a chance to do what Shaun did, in terms of having appeal with mainstream audiences.

It’s impressive that Burton keeps reloading like that. Your company has always had that keen eye for finding talent. The same goes for the business side. You, specifically, have done an amazing job of nurturing gender equality in the workplace.

I guess I take more pride in the fact that my senior team is diverse. We have women in non-traditional roles. Our GM of North America is a woman and our head of HR is a guy. When we started the company, it felt very equal gender-wise. The U.S. Open had equal prize money, women athletes were part of our team. But we were growing very quickly, pulling from the surf and skate industries.

So there was a point where Burton wasn’t as diverse?

Jake and I had this moment years ago, where we were like, ‘oh shit, we’re becoming a dude culture.’ Less than 10 percent of our leadership was women. Now it’s 42 percent. That took 14 years of hard work. Privately, we had to really invest in it. It was something I was championing and helped move along.

What specifically, did you do to move it along?

One of the first things we did was survey the employees. We did one-on-one interviews with females and males and we asked them, ‘what are the challenges we’re facing, and why aren’t women getting advancement.’ It was about getting in the trenches and hearing from women themselves. Our senior team at the time was worried it would be a bitch session for women but it was the opposite. Women had ideas on how to make us better because women who work in action sports are badass, and they wanted to help in creating a better company and reaching the women’s market. If all you have is men in leadership positions, you’re not going to be reaching the female customer. So it’s a bottom line issue, too. You’re not going to be drawing the next wave of talent, or your next generation of customers if you don’t have women in strategic decision-making roles.

This is what a Burton senior team meeting looks like! #workhardplayhard

Do you think you’ve been able to influence other businesses, outside of snowsports?

I don’t know. Did you see the recent numbers? There are less female CEOs than ever. I don’t know why the numbers don’t move. I like to be optimistic. It’s about taking every opportunity to help recruit, retain, and promote women into leadership. I think there are some real structural things as a society that prevents women from taking leadership roles. Women might have to become less solely responsible for raising children. One of the best things we did was institute a policy where the first 18 months after having a child, we allow women to take a caretaker with them if they travel, or have a caretaker hired at home for the time away. It’s so inexpensive because most will utilize a sister or mother. It allows women in high-profile jobs to work as mothers. We had to think outside the box and be proactive.

And it seems to have worked for everyone?

What happened in our company is, when you start implementing these changes, you start addressing things like child care, time off for kids, all of a sudden men go, ‘this is a great company to work for.’ We’ve also made this a mentoring culture, which has helped everyone as it’s been really successful.

Hell No! @jakeburton77 and I can’t be complacent. This #Dumptrump board is our permanent protest against a leader who doesn’t believe in climate change and who doesn’t support women’s leadership. We’re giving $5,000 to @protectourwinters, and another $5,000 to @camberoutdoors. You can join us by leaving a comment with a ❄️ and we’ll give $5 more to POW, plus, we’ll give an additional $5 more to Camber for a ✌️. Check out my story to see more.

Burton has seemed to take a stand, unapologetically, on a lot of issues. Talk about this protest snowboard you created this year, the Dump Trump.

We really felt like everything from gender equality to diversity to sustainability was being destroyed in our federal government so it felt right to do something. We’re so committed to gender equality and diversity and we have a president who is a sexual predator. To us, those are freedoms worth fighting for and protecting. We did get some push back for the board but we realized that the loyalty you get from customers far outweighs the hate. We had young employees say, ‘I just need to tell you how proud I am to work for a company that is willing to stand up against Trump.’ As snowboarders, we’ve always said, ‘f*** you’ to authority. If you know Jake, you know he’s the definition of rebelling against authority. Did we go too far with that board? I don’t think so. Some of our customers might have thought that. But we raised a lot of money with it: $16,000 for Protect Our Winters and $11,000 for Camber Outdoors, which is dedicated to mentoring women leaders in business.

Speaking of POW, sustainability and environmentally-friendly manufacturing is huge for you guys?

Becoming more sustainable was again a situation where we re-examined everything. Five or six years ago we had to take a serious look at it: big picture, are customers really going to care? We never made sweatshop stuff. We’re not in terrible factories. But those are just excuses for not doing the work. There are two sides of sustainability: the human rights side, so every factory must be audited to make sure they’re following human and quality standards; and the chemical side. For a lot of companies, there’s a little bit of don’t ask don’t tell. We never wanted to be seen as hypocritical. We wanted to do things that make a real difference. We went from being behind the curve to companies like the North Face or Patagonia, which are Bluesign® certified, to ahead of it. Being Bluesign® is much more expensive, so you have to say to product people, ‘okay, with lower margins and less profitability in the short term, we’re looking at long-term health.’ I really feel like sustainability is about working with other companies, as well. It’s not about sharing factory info with competitors, which scares a lot of people. But we need to see the long-term benefit of joining forces and sharing best practices. We shouldn’t be reinventing the wheel over and over in manufacturing.

That “together,” or “team” theme seems to be a string through a lot of your business philosophies.

For me, I’d like for Burton to be seen as more than just a gear company but as a true lifestyle brand, and I want people to feel part of the brand whether they snowboard or not. We can help people look at the world a little differently.