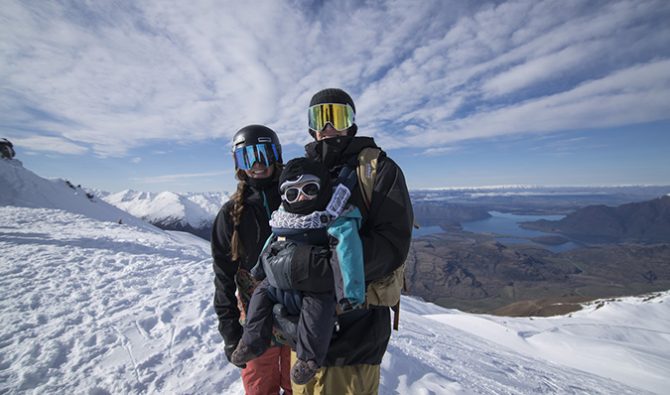 Editor’s Note: On August 17, The Inertia’s EVOLVE Summit will celebrate individuals making positive contributions to surf and outdoor culture. Professional skier Chris Benchetler and pro snowboarder Kimmy Fasani are redefining what it means to be parents navigating careers in the mountains. But how, exactly, do babies, board bags, and airport check-ins fit together? Kimmy and Chris seem to be making it seamless for their young son, Koa. This is a conversation Senior Editor Joe Carberry had with Kimmy and Chris last fall. They’ll be discussing the delicate balance of parenthood and professionalism in the action sports realm in Los Angeles at EVOLVE next month. Tickets sold out quickly last year, so grab one before they’re gone. Enter DAWNPATROL at checkout to save $50 on early bird tickets.

KF: The season before I won Transworld’s (2017) Rider of the Year award was one of the best seasons of my career. I was able to combine progression with big mountain riding and felt like I’d hit my stride with filming. During that time my mother was diagnosed with a really aggressive cancer. She was my only source left. My dad had died when I was younger. The last thing she said to me (before she passed) was, “now, you go and have babies.” I realized after spending all this energy on my career, I wanted to have a family. I didn’t know how long it was going to take, I just wondered what we were waiting for? We’d been married for five years at that point and been together since we were teenagers. We decided to give it a go. I got pregnant a lot quicker than expected. You’re naïve before you have a child. You don’t know how much it’ll affect your life. I wanted to balance my career and having a family, like I see so many men in my industry do. But I knew it was going to be uncharted territory.

CB: I feel like it’s definitely a bit easier for professional male athletes having a child by virtue of nature. I always previously thought the idea that women are expected to hang up the career was dated, but now seeing Kimmy with Koa, he won’t take a bottle, he needs her all the time. It’s so much effort for her to keep the same lifestyle. That will change, but right now the mother is his life source. Before, I thought that perspective was just some people’s ideas of women, however, I’m now understanding nature a bit more. Yes, it’s challenging, but she’s killing it and it’s totally doable. And it’s obviously helpful if you have a partner so you can continually help each other.

KF: I knew that I had what it took and was at the top of my game – becoming pregnant put a spin on everything. I’m excited to see where this leads me. There hasn’t been anybody in snowboarding that’s wanted to take their career past having a child. Mine is going to look a little different now but there’s a lot that’s not going to change. I’m still going to be in the mountains and snowboarding. All my sponsors have stood by me. None of them know what that looks like. I don’t have a specific job description for what I’m doing. That’s the beauty of it. Sponsors have trusted me through the ups and downs of my career and allowed me to create my own niche in backcountry freeride snowboarding. They trust I’ll be able to continue what I do and be authentic. That, more than anything, is most valuable.

CB: I think I have such a different dynamic from Kimmy being the mother. Historically the industry felt kind of anti-mother, and from an outside perspective, it’s seemed like mothers were pushed out and expected to be done with their career. So coming into that mentality, she had different waters to navigate. I honestly didn’t receive any push back from my sponsors, and thankfully neither did she.

Adding to the memory bank with my new fave travel companion. ❤️ Norway to the Gorge with Koa bear⚡️

KF: I’m going down a new road but I’m not the only woman who’s ever done it in action sports. So many amazing athletes have had children and maintained their positions. Lyndsey Pastrana in skating and Bethany Hamilton in surfing are some of my heroes. But snowboarding is a totally different balance. You’re really out there. My child has to be with someone I trust completely. I can’t catch a wave and come back in. You’re deep in the mountains. I try to stay present and evaluate. Sure, having a child is a whole different type of responsibility but I’ve always been a calculated rider. I’ve never thrown myself off something without thinking it through. I feel like I’ll have the same mindset, now.

CB: I guess I expected to feel quite a bit different after Koa was born as far as taking risks out there, but if I’m being completely truthful, I already had a good head on my shoulders when it came to risk. I don’t thrive on super dangerous, exposed lines in the mountains. I’m more focused on the flow and the creative side of skiing. There’s always the risk of avalanches, but I never wanted to die before I had a child, so I’ll just continue down that path of trying to make good decisions in the mountains and doing something I truly love.

Catch more of Chris and Kimmy talking parenthood and professionalism at the 2019 EVOLVE Summit and look for more EVOLVE features as we get closer. Early bird tickets for our second annual EVOLVE Summit are available here. Enter code DAWNPATROL at checkout to save $50 until the offer expires on July 19th. Last year sold out quickly, so grab a spot now. Oh, yeah, you’ll also receive a personalized gift if you get your ticket before August 1st.