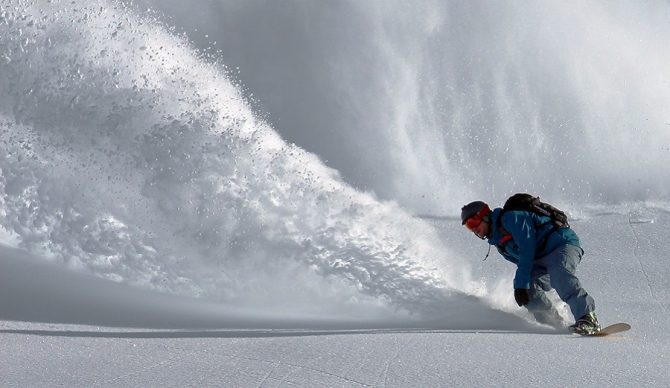 Wow! It’s been a helluva month out West. Resorts throughout the region have scored big time, but nowhere like California, where Sierra areas like Mammoth have now gotten more snow in 2022-2023 than all of last season. And there’s more coming. The end of this atmospheric river event is predicted to bring feet of snow to the Sierra again, as well as other parts of the West.

A wet storm will apparently bring rain levels up to nearly 8,000 feet in parts of the Pacific Northwest through the weekend. Then the separate event that everyone’s keeping their eye on comes in with a bang. From our friends at Powderchasers:

“Another storm begins in California on Saturday, this one looking even colder and more potent than the last. Specifics remain uncertain, but Monday, Tuesday, and potentially Wednesday look like the best powder-chasing day in the Sierra with good odds for more than a foot each day. Check out the ensemble moisture plume from the GEFS showing another fire hose straight into the Sierra beginning this weekend. “

Utah, Southern Idaho and other parts of the intermountain West should also score huge as this atmospheric river sequence finishes up around the 2oth of January and we head back into more of a La Nina pattern with more storminess in the northern part of the continent.

Avalanche conditions have obviously been dicey everywhere so caution is warranted. The Colorado Avalanche Information Center sent out a warning today after four people have been killed in the backcountry there since Dec. 26. There’s plenty of resort riding to be done in the meantime. Get out there and get some.