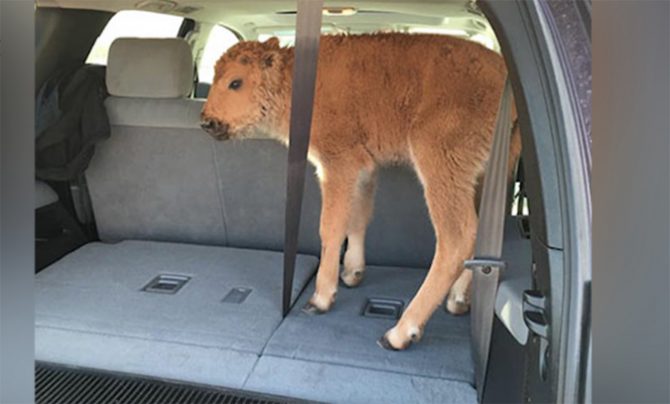 Tourism can help local economies and provide income to people who live in places with little industry. But tourists can also be completely unaware. And that lack of awareness can hurt local environments in all sorts of ways. To wit, a father and son who were recently visiting Yellowstone National Park came upon a young bison calf they thought was hungry and cold. But that wasn’t the case. They proceeded to put the calf in the back of their rental car.

Unfortunately, that had dire consequences. Once a calf is separated from the herd, it’s much like picking up wild bird eggs from a nest, the pack will never welcome the animal back. Plus it’s also dangerous. After the pair–reportedly foreign–brought the bison to park officials they were ticketed for illegally transporting wild game. Park officials also had the pair transport the animal back to the wild while they followed. Apparently the calf was rejected and caused major problems after the incident.

“Interference by people can cause mothers to reject their offspring,” the Park Service said in a statement. “In this case, park rangers tried repeatedly to reunite the newborn bison calf with the herd. These efforts failed. The bison calf was later euthanized because it was abandoned and causing a dangerous situation by continually approaching people and cars along the roadway.”

According to Park officials, the calf would have had to spend months in quarantine for brucellosis in order to be transferred and the park does not have facilities or the capacity to care for the calf.

It’s been a weird couple of weeks in terms of humans harassing or doing damage to wildlife. The Park Service said many people have been trying to touch buffalo in recent weeks (the law requires visitors to stay at least 25 yards away from bison and 100 yards from bear and wolves) and four men were captured on video recently trespassing on the sacred Grand Prismatic Basin hot springs. In a separate incident, investigators ID’d vandals who, in a drunken stupor, vomited, shot guns into and stomped on the bottom of a protected body of water known as Devils Hole in Death Valley National Park resulting in the death of tiny endangered fish called the Devils Hole Pupfish.

Us humans can definitely be a cruel species.