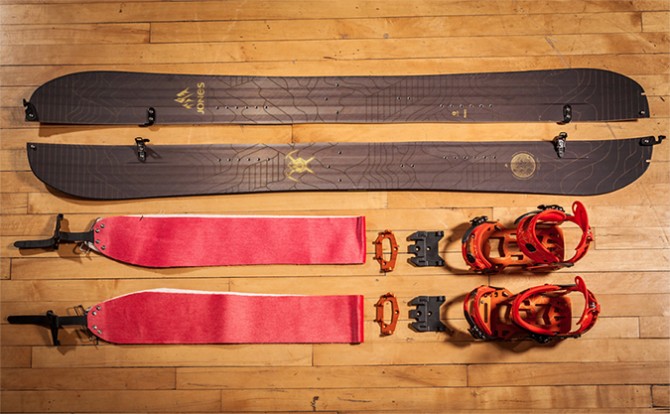 I have been splitboarding for 12 years now. In that time I have ridden the same setup since day one. It’s not that I haven’t seen the technology progress as those around me upgrade to the latest and greatest, but I guess I’m from the “If it ain’t broke, don’t fix it” camp. Case in point: I still drive a 91 atomic blue Honda Civic that runs like a champ. But I digress.

Recently I had the opportunity to try out some new goodies, and I now see the light. Sure my old gear works the way it’s supposed to; but the amount of energy wasted on extra weight and finicky bindings is enough to make me look back in embarrassment at how much more vertical I could have had over the years by staying up with the times.

But it’s no point crying about it, we can only control the now. So as I tried out the Jones Solution splitboard and skins, and the Spark Arc bindings, I made the most of every second I was out there. And I was a bit blown away. 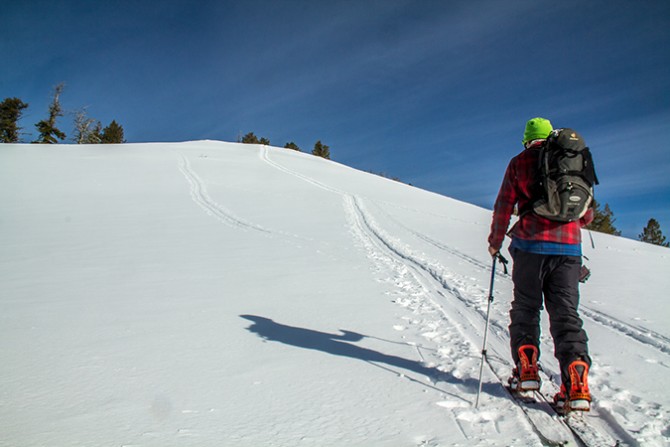 Board: Jones Solution 161
Jeremy Jones has been pushing the limits of what’s possible on a snowboard for quite some time now. Much of it is documented in his trilogy of Deeper, Further, and Higher as he sought out new lines in some of the world’s most remote ranges. It’s pretty safe to say that he has logged more days on a splitboard than you or me. Bottom line: he’s got a hell of an opinion for what makes a good one.

The Solution does not disappoint. With all the modern amenities such as magne-traction edges, rocker on the tip and tail, and camber underfoot, this board rides like it’s actually one unit. In fact, I also tested it on hard packed groomers at the local hill and couldn’t detect any noticeable setbacks when compared to a solid board.

Skinning up is when I really noticed how much of a difference a lightweight board makes. The ease of which it glides through fresh snow took off some serious time on the climb. It also helped when traversing steep pitches, especially when the snow was windblown and hard packed. No wobbles or missteps for this cowboy.

On the downhill, the board felt playful, and I couldn’t help but feel compelled to pop, spin around, and pull bowl-style skate maneuvers on every little terrain feature I saw. The board is just poppy enough to make even mellow terrain really fun, but solid enough for when you want to point it and pin it down a steep pitch. The tail rises enough where riding switch is no problem; I landed switch off jumps with no issues. And yes, I patted myself on the back. Several times.

Splitting the board apart is a non-issue with two hook switches that easily separate the board with a simple flick of your finger. Putting it together takes a bit more finesse when lining up the hooks, but it’s something that you can get the hang of in no time.

This beastly machine took whatever I threw at (under?) it, but I’d say that it is ideal for those whose goal is to turn the backcountry into a personal pow-caked terrain park. If speed and giant Alaskan-style lines is your aim you might want something stiffer. But if you want fun and playfulness out in the backcountry, then you can’t go wrong with the Solution.

Within 3 moves (4 including splitting the board), your setup morphs from riding to touring mode.

Bindings: Spark R&D Arc
Splitboard-specific bindings are actually a young concept when compared to their splitboard compatriots. For many years (including my now-archaic setup), one would mount their traditional bindings onto a set of plates that you would affix to a set of pucks using a groove-and-pin system that caused me to shout more than a few frustrated obscenities over the years.

My, how things have changed. Spark R&D bindings recently unveiled their Tesla system which makes transitioning from riding to touring mode ridiculously easy.  The bindings even work with the old Voile puck system to fit your older board setup. I wish I’d known that sooner when I blew a shot at riding with my editor on a bluebird afternoon while searching for missing parts that didn’t exist. Within 3 moves (4 including splitting the board), your setup morphs from riding to touring mode. This saved minutes off my transition time. Also impressive was how easy the heel clip underneath the bindings could pop in and out using only my pole, allowing me to switch to a steeper ascent angle in seconds for those steep climbs.

Just as important as the speed in transitioning is how light these bindings are–so svelte you take little notice when climbing. If you bonk while skinning up, it’s not the bindings’ fault, your weak ass just needs to get on an elliptical machine.

All in all, these bindings make life far less tedious out in the backcountry, which is always welcome. 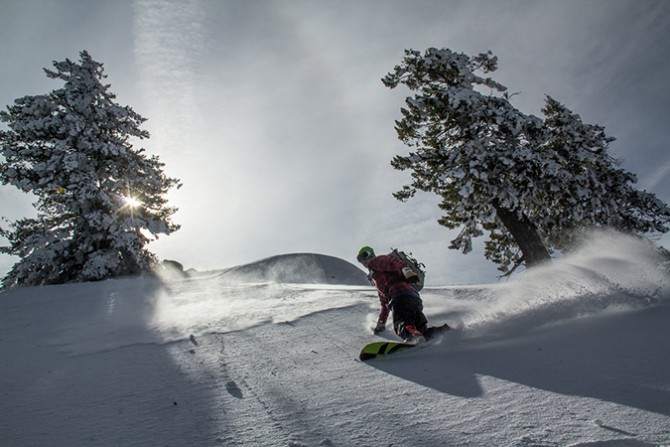 Gliding was effortless, even while heading down slopes where it wasn’t worth transitioning to riding mode or walking downhill for a hundred feet. Some brands grip too much when gliding, wasting precious energy or causing you to fall over on those moments when you need to ski down a small slope. Not with these.

Gripping the snow also exceeded expectations. I was sticking to steep slopes that I’ve been cautious on or side-hilled with other brands. In fact, my knees gave out on a steep pitch before the skins did.

As far as durability, they seemed to pass the test. Cheaper brands will show signs of wear within a day or two. If the snow has a hard, grainy consistency, cheap skins will start to fray on the edges and get bald spots. I didn’t notice a single sign of this happening.

Jones and Spark are relatively new as far as sports brands go, but in the splitboarding world they have already established a strong footing as leaders in quality.

What I Found
So there you have it: one man’s opinion, although having got into the splitboarding game early I’ve seen trends come and go. Both Jones and Spark are relatively new as far as sports brands go, but in the splitboarding world they have already established a strong footing as leaders in quality. If you have no idea where to start on a setup, you will be more than happy with this one, which will last you years, and countless peaks to come.

Editor’s Note: Riding in the backcountry takes intimate knowledge of weather conditions, deep respect for the power and trends of shifting snow (i.e. avalanches). But once you’re in, you’re in for life brah! There’s nothing like surfing wild snow. Stay tuned this week as we prep you for spring touring season with a look at a safety kit including pack, avalanche beacon and shovel. Winter isn’t going anywhere.