Mt. Pinos Is Some of the Closest Backcountry Skiing and Snowboarding to L.A. 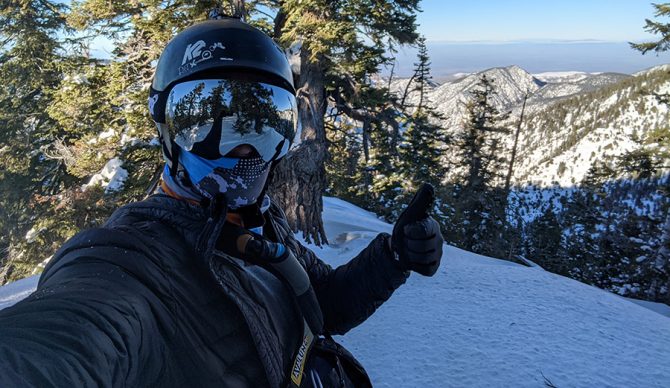 About two-hours from Los Angeles there’s an eight-mile road. Along this eight-mile road is a network of trails — some mapped, some known only to the locals — that weave in and out of the Los Padres National Forest. Show up on a weekend, or after a huge snow dump, you’ll find 500-plus cars parked anywhere there’s space, with people spilling out ready to enjoy a full day of cross-country skiing, snowshoeing, sledding, tearing up the backcountry, or simply tailgating in thermals and ski pants.

Mt Pinos is the highest point in Ventura County at 8,847 feet, and sits just outside of Frazier Park, a small community known for its hiking and mountain biking in the summer. Although the mountain is almost exactly the same distance from L.A. as Big Bear, the area’s more commercial, well-groomed sibling, Pinos remains a little more discreet, attracting mostly locals, long-term residents of the surrounding cities, and avid nordic skiers. That doesn’t mean you’re not welcome though.

“For the most part, we love to see people on the mountain. We want to encourage that,” says Elliott Reyna, a local firefighter who grew up in Frazier Park and, although moving away for college, came back to start a family and regularly shred the wooded acres he knows like the back of his hand. “Take today, I had a man in a jeep asking about splitboarding. I showed him some spots.”

Backcountry skiing and snowboarding is definitely an option, but again, this isn’t a resort. Reyna, who has been making laps since high school, hitchhiking up and snowboarding down, stresses if you want to go that route you either need to know a local to show you the ropes, or do some serious research. You’ll also want to have all the rquisite avalanche gear (shovel, beacon, probe, partner), be aware of avalanche safety, and be realistic about your skill level.

“The style of snowboarding is very much (riding in the trees), a more advanced style,” he says. “People get lost all the time. Maybe a week or two after it snows you could follow the snow, but half the mountain doesn’t even have cell service. You need to be careful.”

Cuddy Valley Road, the only thoroughfare to get up to Mt Pinos, tops out at the Nordic Base, an operational HQ for the volunteer-run Nordic Ski Patrol. On the days they’re patrolling, you can stop by and pick up a map for a modest donation and buy an Adventure Pass. You can also nab an Adventure Pass ahead of time online. From here, multiple trails thread out into the beautiful winter landscape. Beginners may start on the Overlook Trail, where intermediates and experts can reach the top of Pinos itself by taking the Amargosa to Condor Summit tracks.

According to Aaron Price — a Thousand Oaks resident who commutes to Mt Pinos for its reliable nordic skiing conditions — the best trails are the ones further down.

“I’d recommend going just about any time there is snow, but my preference is when the road is closed you can start at the bottom and ski up,” he says. “This is a much better way to quickly get away from the crowds.”

If neither shredding the pow in the backcountry, or feeling the burn of cross-country skiing are your things, there’s a healthy mix of sledding (in an area the local’s have fondly dubbed “snow bunny hill”), snowshoeing, and just chilling by the road with your crew grilling some ‘dogs and enjoying a cold one. Be warned though, there’s nowhere to rent any kind of gear. Although you can buy sleds at the local Ace Hardware or most liquor stores, you’ll need to own a full ski or snowboard setup, or rent one before you come.

You’ll also need to grab a set of chains for your car. Conditions get dicey, and more often than not, the California Highway Patrol will turn you around without them or a four-wheel drive.

Before you roll out of bed, check the conditions. If it’s fresh after a storm the snow gate up to the mountain may be closed. If it’s open, get there early. Like 7 a.m. early. The CHP keeps a track of all traffic coming into Frazier Park off I-5 and will stop you if it’s getting saturated. Once you’re in town, swing by Crow’s Custom Cookies for a donut and a coffee before heading up the mountain. Park in either one of the two lots, or respectfully on the side of the road (the local’s will appreciate it), and ride until you’re tired. Once you’re done, light up the barbecue and crush bevs with friends or head back into town and stop at either Mike’s Pizza or Caveman Cavey’s for a slice.