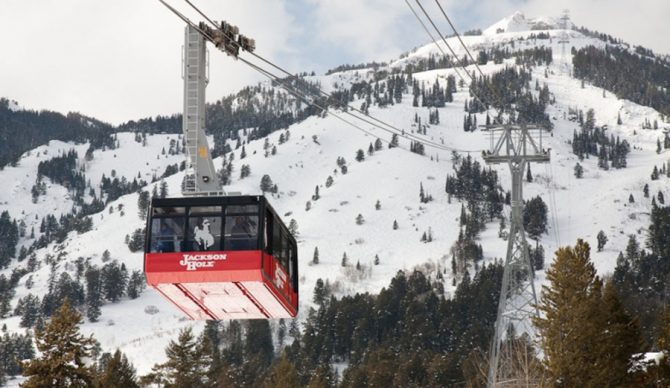 While Jackson Hole plans to open all of its lifts, trams and gondolas might not be part of the new normal at some resorts. Photo: JHMR

It’s mid-February in Jackson, Wyoming — sacred ground for skiers and riders. I’m hundreds of feet above the ground being whisked uphill at just over 10 miles-per-hour. Packed into a sweaty box of tourists (myself one of them) who all seem to have poor balance and a common cold, there’s no place I’m more likely to catch whatever the guy standing next to me has than right here.

Yet, there’s something undeniably beautiful about the whole situation — mainly that it’s Jackson Hole’s historic Aerial Tram and there’s hundreds of vertical feet of untouched snow beneath us. Separated from unadulterated freedom by several more crammed minutes and a few clicks of my bindings, the anticipation grows — the last thing on my mind is some invisible sickness.

Looking back on moments like these I fully appreciate the irony of ski resorts. We go to experience untethered freedom, but all too often end up crammed in spaces full of germs and uncomfortable, overtired tourists. Yet still, as skiers and snowboarders, most of us wait all year for the lifts to start spinning.

But this year is certainly different. Those tram rides stopped spinning in March, more than a month early as ski resorts around the world closed in unprecedented fashion as the COVID-19 pandemic shut down the world. Outbreaks in places like Sun Valley had the resort world taking the disease as serious as any industry on the planet.

As summer fades and winter fast approaches there’s a nagging question for snow aficionados the world over: What will resort skiing and riding look like in 2020-2021?

Aside from a two-year closure for construction in 2008-2009, this summer Jackson Hole’s Aerial Tram closed down for the first time in over fifty years. In operation since 1965, it’s a staple of operations at Jackson Hole and typically plays an important role. The resort has been forced to find alternative ways to get people up the mountain, utilizing the Bridger Gondola for summer activities like paraglide launches, lift-accessed biking, hiking, and sightseeing. And it’s a precursor of what it might look like this winter.

“We intend to open for our originally planned and scheduled season, and we hope to be open the entire season,” says Anna Cole, communications director at Jackson Hole. “Of course that depends on what orders might be coming through the state and health office.”

Here in Whistler, BC, rumors are swirling. Most common: the resort will only open one mountain; or worse, the mountain might not open up altogether.

Some of the questions have been answered – on August 27, CEO of Vail Resorts Rob Katz penned a letter to Epic Pass customers regarding the plan for the 2020-2021 season, along with a slew of new COVID-conscious procedural guidelines.

The letter outlines much of what you would expect such as face masks in lift lines and required physical distancing in the lodges and resort facilities. How exactly that will happen remains to be seen, but the announcement shows the full intention of Vail Resorts to open its 34 resorts across North America.

Of note, Katz announced only season pass holders will be permitted on the resort before December 8, and will need to reserve each day of skiing or riding before arriving.

The full letter can be found here, and while it answers many questions, it leaves just as many unanswered.

What the rest of the resorts across North America will do is still a mystery — but there are plenty of clues out there. Resorts like Whistler-Blackcomb, Jackson, Mount Hood, and more are operating this summer with similar caveats to what Vail outlined.

While these policies seem to work, managing crowds in the summer is undoubtedly easier than the winter, with resorts typically seeing much higher traffic and more density during snow season ( think about the morning of a powder day at your home hill, now try to physically distance).

The countdown to winter is on. ⠀ Today marks 100 days until we are back on the slopes, breathing in cool alpine air, and cruising down the flanks of Lone Mountain.

On top of that, there’s the tram and gondola question. How does an enclosed tram or gondola run during the winter?

In a recent interview with the Intelligencer, Dr Ashish Jha, professor at Harvard School of Public Health and Harvard Global Health Institute gave us a good indication of what the “getting up” part might look like.

“(When it comes to riding a chairlift), it’s probably fine — you share someone’s space for five minutes, but it’s outside….I think you can probably get away with it,” said Jha.

As for a gondola, Jha was a bit more pessimistic: “You probably want to open them up a little bit and ventilate them, have some amount of fresh air going in, and get people to wear face masks, and that might be okay. But that starts getting a little bit riskier.”

As of now, ski resorts of all sizes are marching forward with opening plans, and they’re encouraging you to join them. But according to a model by the National Ski Areas Association (NSAA), the economic losses caused by COVID-19 are estimated at $2 billion, taking into account revenue with an expected drop in future season pass sales.

Along with a loss in customers, there’s long-term planning implications — Big Sky, just outside Bozeman, Montana, was forced to push the construction of its much-hyped six passenger lift to Summer 2021 for fear of supply chain and construction delays.

While some resorts were able to re-open at the end of the season such as Crystal Mountain, Mt Baldy, and Mt. Bachelor, most weren’t afforded the privilege of a long season, unable to recoup any of the lost revenue. 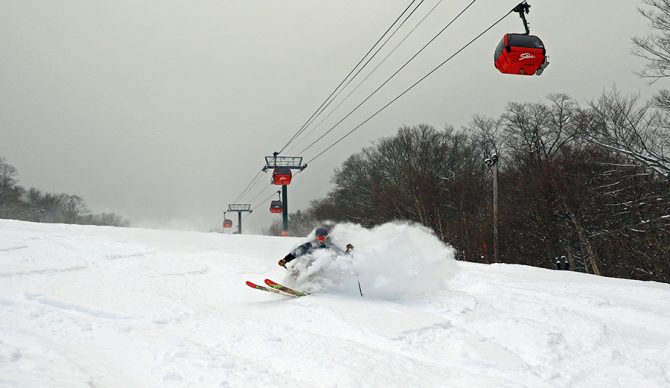 Stowe is hoping things look a lot like this. Photo: Stowe Resort

So, for the majority of ski resorts which operate on slim margins and a dire need for visitors, the push to open makes sense.

At Stowe, one of the biggest resorts in the East owned by Vail, plans haven’t changed either. “We are looking forward to a great 2020-2021 ski and ride season and are planning on opening all of our resorts,” said Jeff Wise, senior manager of communications at Stowe.

The same goes for Aspen, which, notably, dealt with a brief outbreak of COVID-19 within a group of Australian visitors who were subsequently quarantined. Since then the community and greater state of Colorado has served as a model for a state government’s response to the pandemic.

That sweaty, packed tram that we were talking about earlier — that’s not the only congestion you’ll find at resorts, or as Aspen-Snowmass Communications Director Jeff Handle would call them, “pinch points”.

If you’ve been on a ski vacation, the worst iteration goes something like this — wait in a long ticket lineup with other travelers jockeying for position ahead of you, then wait in a long, packed lift line where that same guy from ticketing is jostling you again, repeat, and eventually manage only two runs before lunch. At lunch — the “relaxing” part of the day – you’re greeted by an overcrowded and overpriced lodge where food is served. 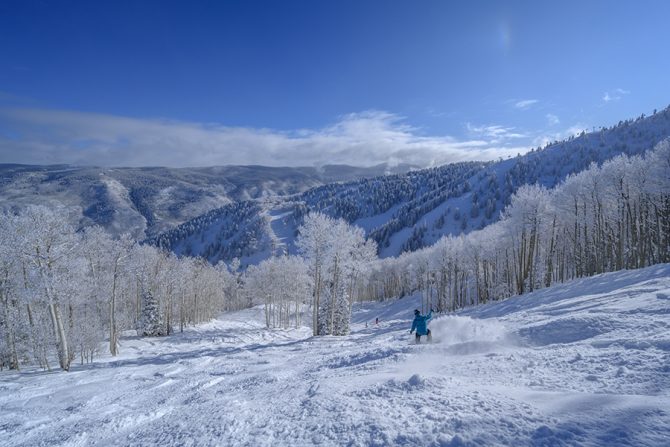 Aspen is planning on serving up plenty of pow, and cutting down “pinch points.” Photo: Lindsy Fortier/Aspen Snowmass

Sorry for the gloom and doom, but thus is reality of the ski resort for many.

With a global pandemic, the risk of these “pinch points” isn’t just unhappy customers. “If there’s a big outbreak in Summit County, it’s not just going to shut down Summit County, it will start shutting down the entire state,” says Jeff Hanle of Aspen Snowmass.

Luckily, the summer operations at Aspen has already served as a model for what ski season might look like — and it includes a heavy dose of screen time.

This summer, Aspen has taken steps to digitize food ordering (an obvious pinch point in the ski resort world), allowing guests to order on their phone and pick up when their food is ready, minimizing contact and decreasing the time spent for the customer. The same processes have been adapted for the mundane tasks of signing waivers, purchasing lift tickets, and more.

Attempting to eliminate crowds is just the tip of the iceberg, and resort executives across the country are well aware of that — to have a successful ski season will require tourists from all over the world to work together to avoid becoming a scapegoat for further spread of the virus — and that requires a mutual respect between locals and visitors alike.

“I think people will make more educated choices in their travel and understand that if they are going to come to a ski town for a vacation that they need to respect the community and adhere to the rules and regulations so that we can keep the ski season alive for everyone,” says Hanle. “If we want to ski, it’s going to be an effort as an industry, an operator, as a community, and as a dedicated and passionate skier or rider. Everyone of those parties will play a part in keeping the ski season viable.”

Just like keeping a relationship alive, resorts across the country know what they need to focus on: communication. But this time, they need everyone to listen.

With ski season quickly approaching, there’s no doubt that millions are aiming to book trips, eager to know what awaits them at resorts. In the coming months, resorts will begin to roll out re-defined refund and cancellation policies, operational changes, and more. And they’re asking that you listen, and understand.

“I think the thing that we’re learning is people need flexibility,” said Jackson’s Cole. “If people are going to book they need to know there’s cancellations in place, and that their vacation is not going to completely go in the dumps.”

While resorts can put in cancellation policies and implement technological leverage to shorten lineups and increase overall efficiency, it’s up to the visitors to work in concert with the resort , for locals to work with visitors, and for everyone to focus on a shared goal of keeping the 2020-2021 ski season alive. For the first time in our lives, the immediate future of the snow season is in our hands, and time will tell if we’re up to the task.