There are plenty of storylines that’ll come out of Jackson Hole’s Kings and Queens of Corbet’s. It’s one of the most digestable events imaginable. Snowboarders and skiers simply chuck themselves off the crest of the most iconic line in all of North America then complete their runs by making several man-made kickers look beautiful on their way to bottom.

And it went off yesterday. Athletes from all over the world gathered at the top of the couloir, just below the Jackson Hole tram exit, and readied themselves for one of the most nerve-racking hits in all of mountain sports. Control your speed along the flats, then hurl all hell into the beast – a strip of snow tucked tightly between towering rock walls on either side that are roped off to the general public.

My favorite moment was watching Squaw Valley, California-native Veronica Paulsen throw a perfectly-floated backflip – not rushed, not hurried, but held to perfection as she stomped the landing. It felt prolific. It felt important. And it was. There aren’t a lot of  firsts left these days in the mountains. It’s more difficult than ever to do something special. Something that hasn’t been done before. And that’s what Paulsen, who grew up skiing bumps before turning her attention to big mountain events, was able to pull off, becoming the only woman to ever throw (and land) a backflip into the famous chute.

“There’s not many firsts left in Jackson,” she told me, “so it’s cool to have one under my belt.” 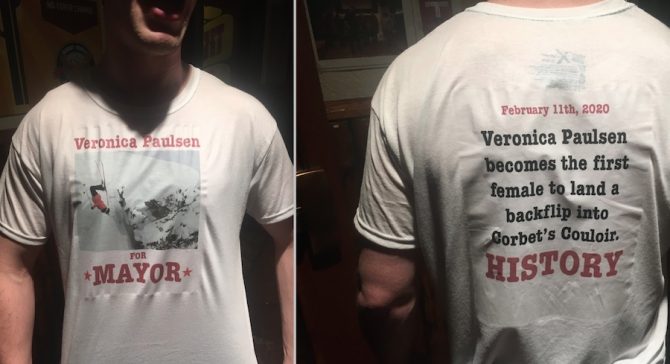 These t-shirts are definitely the hottest item going in Jackson Hole right now.

I’m not sure if the difficulty of the feat can be overstated. Veronica had to build her perfect lip on the takeoff (competitors are allowed to use shovels to sculpt their launch pad, pre-event). She had to gauge the landing, 25 feet below into firm-ish, steep snow. Backflipping into Crobet’s has been a three-year project for Paulsen. She first attempted it (unsuccessfully) at the Kings and Queens in 2018. Then tried twice in 2019, unable to land the difficult trick. “I’ve been thinking about this since the first Kings and Queens,” she said. Veronica and her friends have worked on the trick everywhere she could find a similar set up, gauging the height and the landing of different spots. “I scoped out other cliffs so I could try it,” she said.

And her friends were rooting for her, knowing this moment was hers. Randy Strand, who coaches junior Freeride skiers with Paulsen and competes himself, watched her throw the backflip. He then sprinted home during the event and printed up a t-shirt to celebrate the moment on an industrial heat press he owns (he definitely had it planned out). “Going into it, (she spent) the entire summer lifting six days a week, staying on top of it, as soon as snow started to fall, (she looked for) anything you can flip off, whether it’s a park jump – we went up to Revelstoke (to work on it). It’s just months of work that goes into a 10-second run, and to see it all pay off, it’s just so impressive,” he told me after. “She absolutely worked her ass off for it. It couldn’t have happened to a better person.”

She was celebrated all over the mountain, with kudos from every competitor at the after party and a bit of dancing and revelry at the Mangy Moose afterward.

“The first female to stick a backflip into Corbet’s, and she laid it out, too,” said event organizer Jess McMillan. “It was insane.”

No, there aren’t many firsts left in the mountains. I was lucky enough to witness this one from the lip with the rest of the media throng. It was a good day.

Editor’s Note: The Kings and Queens of Corbet’s is a peer-judged event. Winners will be announced during the after party this Saturday, February 15, at the Pink Garter Theater in Jackson, Wyoming.

This feeling 😊 Topping out on the hike and getting ready to shred with your friends. It doesn’t get any better 🙌🏽 📸: @skibrd