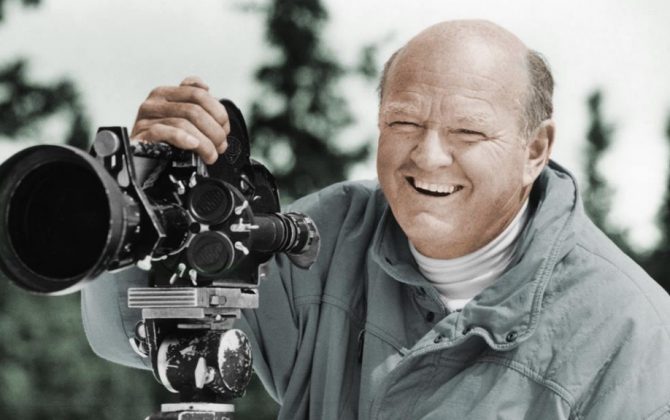 For generations of people who love to ride snow, Warren Miller was a stoke-invoking voice that often played like a soundtrack to winter.

That voice has gone silent, as Miller passed away Wednesday night at his home in Orcas Island, Washington at 93.

A native of Los Angeles, a self-taught filmmaker, and a lifer in the way of outdoor pursuits, Miller’s films certainly inspired me as a kid. One of my fondest memories was the long lines of excited skiers waiting to get into the local theater downtown where I grew up with everyone talking about last year’s adventures on snow. Popcorn and snack wrappers would crinkle on the floor under the feet of people trying to find seats and sometimes, the smell of weed would waft up into the high ceilings of the historic theater that featured an old Egyptian theme, complete with huge statues of Pharaohs and cats (that part was kind of weird).

As Scott Schmidt and Glen Plake would fill the screens with their now hilariously-skinny skis, hoots from the crowd would fill the old venue. What I loved most is how stoked and excited and generally happy people were that winter was on its way. Slow motion shots of ridiculously-deep powder will do that to you.

Many film companies would follow like MSP, Teton Gravity Research and Poor Boyz, but none of them had the naturally-inclusive feel that Miller did in his films (he was one of the first to include snowboarding). He wanted his audience to love adventure. I always wanted to take my parents and relatives who didn’t ski or snowboard to his films. I thought it would convince them that riding powder can actually make your life better. Because for 60 years, Miller invoked that feeling in his films like no one else. “If you don’t do it this year,” he would say as he closed out his movies to motivate viewers, “you’ll be one year older when you do.”