If An Animal Kills a Person, Should We Kill It? 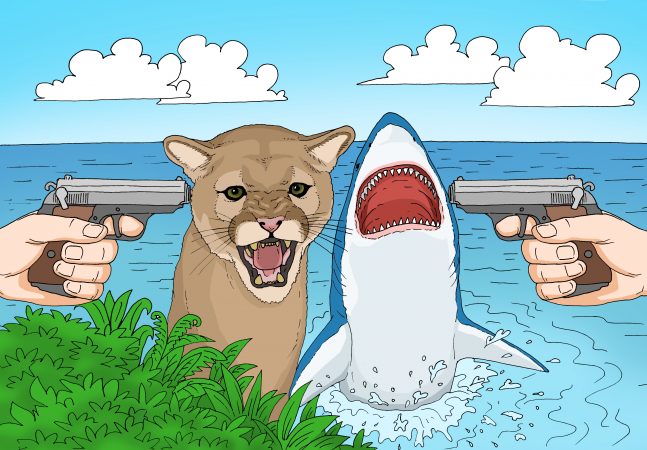 If a cougar and a shark kill a human, what happens next? Art: GaryL

After the recent death of Sonja J. Brooks, a cyclist who was killed by a wild cougar in a forest in Washington State, a challenging ethical dilemma has resurfaced: How should authorities respond to a wild animal that has killed a human?

Although Brooks and her companion, Isaac Sederbaum, made loud noises in an attempt to scare away the cougar, as authorities advise people to do in these circumstances, the animal still attacked. Sederbaum managed to escape, and police returned later to find and shoot down the animal.

The killing of wild animals extends beyond the tragic death of Sonja Brooks. With a spate of shark attacks in West Australia, including the death of Jay Muscat in 2014, authorities are attempting to determine a sensible response. In Muscat’s case, Australia decided on a catch-and-kill policy to attempt to kill the shark responsible. Authorities decided that sharks similar in size to the one involved in the attack were acceptable to kill, despite this kind of culling having a negative impact on marine ecosystems.

According to the 2017 International Consensus Principles for Ethical Wildlife Control, current methods to handle these human-wildlife conflicts include “exclusion, trapping, hunting, poisoning, or otherwise destroying animals,” yet often these techniques lead to harm or death for non-target animals. Relocation – or even putting the animal into a zoo – can, on the other hand, provide a more humane alternative.

“If a person has been killed, then there is a clear threat,” David Fraser, a professor for the Animal Welfare Program at University of British Columbia, told The Inertia. According to Fraser, only once that threat has been established can humans lawfully take action.

But sometimes relocation is not possible, even for the animal’s sake. As Fraser says, “There are species that don’t adapt successfully to a new area because they will be excluded by resident animals, won’t have what is needed to find food, etc.”

Others believe the relocation of animals that are proven human-killers simply isn’t feasible.

Craig Packer, a professor of ecology, evolution, and behavior at University of Minnesota, believes the relocation of “man-eaters” is dangerous. In the case of animal relocations in India, often the relocated animals simply attack humans again in this new region.

“It’s a reasonable assumption of leopards, tigers, and lions that kill people that they are likely to be repeat offenders and will likely have to be sacrificed,” Packer told The Inertia. These animals typically become repeat offenders because they seem to realize that people are food. “If you want to reduce further risk to humans, you have to remove the animal from nature,” said Packer. And when relocation or putting the animal in a zoo is impossible, then Packer believes the “only solution is to sacrifice the animal.” That’s quite a euphemism for murder.

According to Packer, the most effective solution is to prevent animals from killing humans in the first place. In Africa, lions often reside in parks that are closed off from humans by a large physical barrier. Unfortunately, no such solution exists in wild spaces.

While the death of humans due to wild animals can spark fierce debate about the appropriate response, the issue remains extraordinarily complex. While it is emotionally counterintuitive to protect an animal that has killed someone we love, the fact remains that sometimes it is simply not possible to protect these animals. We can seek to relocate man-eaters or to sacrifice them, but, as with many things, the best solution is often the most challenging: prevent it from happening in the first place.