It’s Spring Touring Season: Avoid These Mistakes to Enjoy the Backcountry Even More 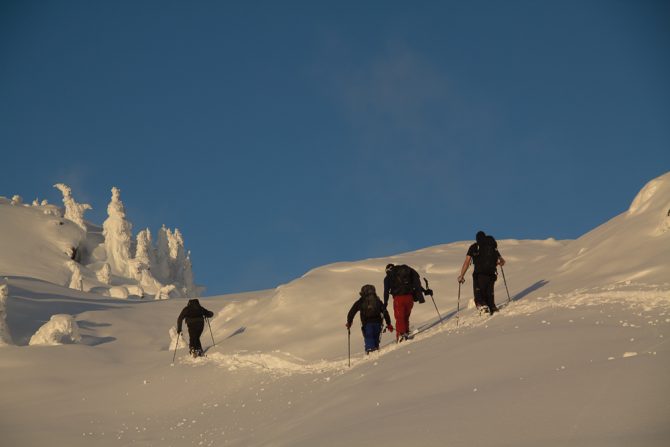 And so begins the slog. Photos: Steve Andrews

Spring in the mountains can be an exciting time. The longer days and warmer nights beckon us to explore peaks much further than the usual jaunt. For some it means trying to score bucket-list objectives, riding big lines, or accomplishing traverses that serve as therapy for an ever-increasing state of anxiety brought on by the latest doomsday current event. The backcountry is paradoxically a place to escape and a destination to seek out all in one; and it just may be one key to generating enough energy for humanity to fight for what’s left of our wild places.

I’m a big advocate for getting more people out to explore the backcountry. As a guide, I’ve made it not only a passion but a vocation. Yet even more than guiding people, I hope to educate them so they feel confident enough to go out on their own. That’s where the real magic happens. So once people feel they’re ready to go out on their first trip, I make sure they’re aware of a few things that might not be at the front of one’s mind. This short list comes from learning from my own mistakes during nearly 20 years of backcountry touring. So hopefully it can help prevent some calamities for those wise enough to heed the advice. 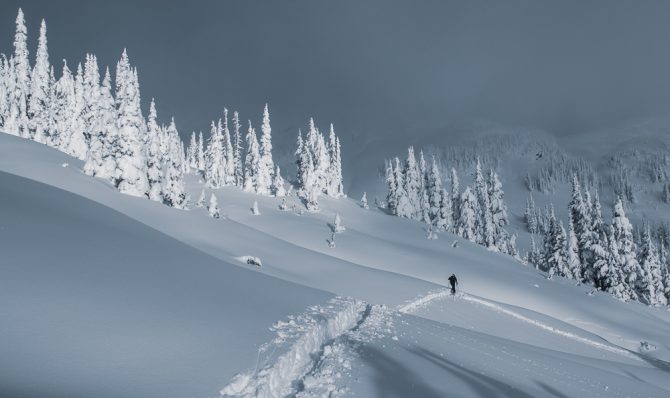 But for the views like this. Photos: Steve Andrews

Starting Late: Aside from the obvious reason of not being lazy, there is actually a scientific reason to seize the day as soon as possible in the backcountry. During this springtime diurnal (meaning daytime) cycle of snow changing its state, it’s much safer to travel on a solid slope than one that is rapidly deteriorating in the sun. Most avalanches happen in the afternoon during the spring – especially large ones. Aside from this fact (which should be plenty reason enough), there’s also the reality that you can move incredibly fast on a hard surface rather than in knee-deep slush. So not only will you be crushing more lines with an early start, you’ll also have more energy at the end of the day to do it all again. So forgo the temptation to sleep in, simply because there are more hours of daylight. Get up early, crush those lines, and come back down to basecamp to enjoy an afternoon in the sun while staying out of harm’s way. 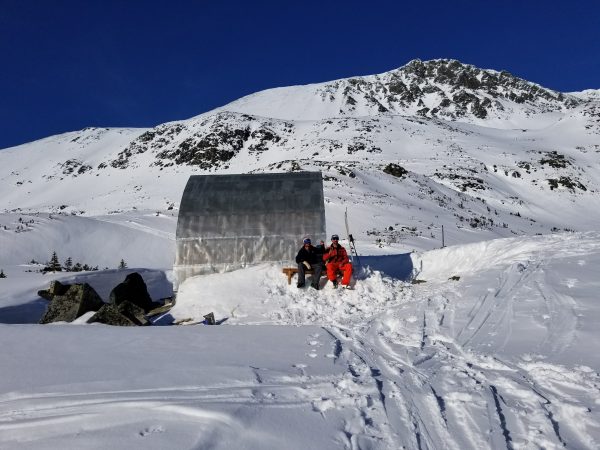 Not Having a Turnaround Time: This is one of those situations that creeps up on people because they were simply having too much fun to take notice of the day getting away from them. But whenever you’re far from civilization, it’s important to take note of how long it will take to get back to your starting point. Sometimes it’s easy enough to calculate, other times it’s more difficult. But always err on the side of taking a few more hours than necessary to account for mishaps. 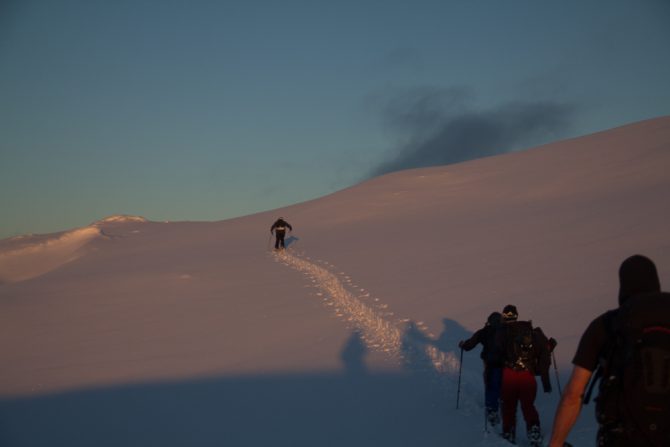 When the light is like this and you’re at the summit…. you better hope you have a headlamp in your pack. Photos: Steve Andrews

Forgetting a Headlamp: Nobody plans to spend an unexpected night out in the backcountry. Yes, very philosophical inward look there to realize that the unexpected moments are in fact, unexpected. But one of the easiest ways to avoid a bad day getting worse is to bring a light source with you. Headlamps these days are reliable and lightweight. You won’t notice it in your pack but you’ll be singing with joy when it’s there and you need it.

Wearing Cotton: Cotton is lightweight and can feel like a cool fabric, but once you start moving, that all changes. The fabric soaks up sweat and stays soaked, especially if underneath a jacket. It’s not very noticeable while on the uptrack, but as soon as your heart rate drops and the cool air sets in, it becomes a huge problem. When you’re a few hours away from civilization this might result in a bad day of discomfort (or worse). So to avoid that it’s wise to invest in a good underlayer made of merino wool. If you can’t afford the merino, a good synthetic layer will do, but anything will be better than a cotton shirt. 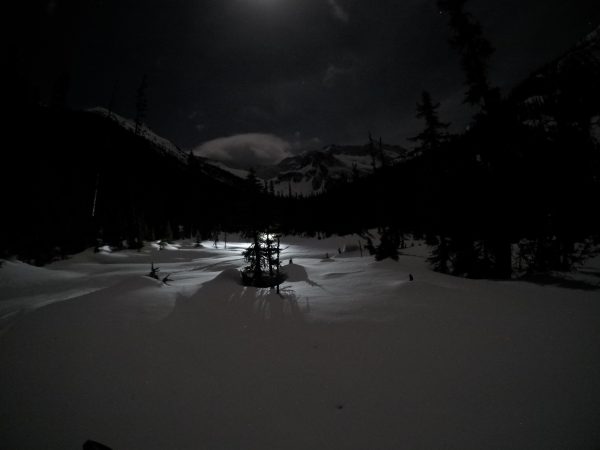 This is one of those times where a headlamp saves the day. We couldn’t find the cabin we set out for. Later we realized we were in the wrong valley altogether. Photos: Steve Andrews

Not Stretching: This rule increases exponentially in importance for every year over 30 you are. Seems to be as though the ol’ body just doesn’t act like it used to when aging rears its head. Even when in shape, the lack of stretching after prolonged repetitive movement will catch up to you. It certainly did to me. Hiking or skinning up a slope is not necessarily a difficult task, but it’s repetitive.  The added weight of your gear, no matter how ultra-light the label says, does take it’s toll after several hours. A few stretches before and after your day will allow you to have a much better second and third day if you’re spending the night out there. There have been a number of times where getting the desired vert just wasn’t in the cards because someone in the group was too sore. When that person is you, it’s never a fun position to be in. So save your body from soreness and your ego from ridicule by having a good stretching routine at the end of a long day. 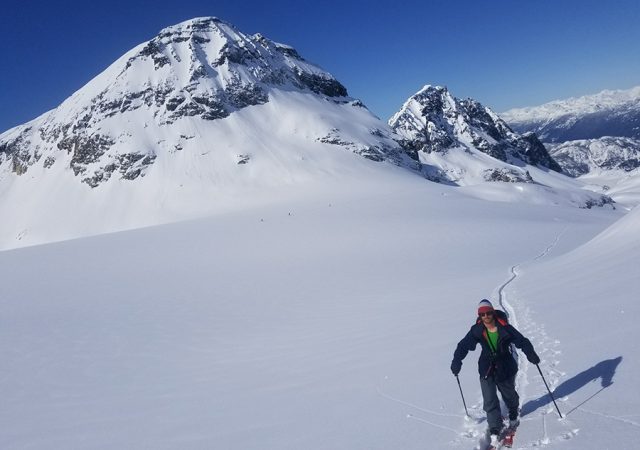 This is by no means a comprehensive list. But it’s a great starting point that hopefully will bring to mind a few things that are often overlooked. Backcountry touring is a fantastic way to spend your time, and if you follow this advice, that time will be much better spent than the alternative. So get out there, enjoy yourself, but also don’t forget to think ahead. It’ll be well worth the investment.

Editor’s Note: Interested in safely riding in the backcountry? There’s a lot to learn. Especially with safety as the top priority. In his introductory course, Nick Russell’s Guide to Backcountry Basics, big mountain snowboarder Nick Russell shares a lifetime of knowledge and information essential to begin your journey.