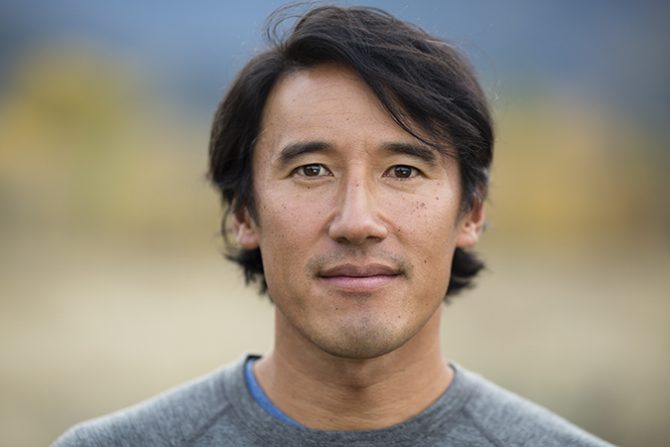 Jimmy Chin near his home in the Tetons. Photo: David Stubbs

If one were to create the perfect filmmaker, capable of facing the most stressful of situations high in the mountains while possessing both the ability to frame the perfect shot and get in position with ease, Jimmy Chin would be it. An incredible athlete in his own right, Chin was measured and thoughtful when I caught up with him on the phone recently from his home in Jackson Hole following an unprecedented run of success that included he and his wife, Elizabeth Chai Vasarhelyi, winning an Oscar for their work on Free Solo, capturing Alex Honnold’s now-iconic gear-less ascent of Yosemite’s El Capitan. Chin isn’t one to be rushed when answering questions, a reflection of how he works in the mountains, where lives are at stake and safety is everything. In a wide-ranging talk, we spoke about his responsibility as a filmmaker, the responsibility of the media, and how his choices in the field are solely based on his subject’s experience: he’s simply there to record history.

Winning an Oscar is such a huge deal in the world of filmmaking. Meru was shortlisted for a nomination. Has it changed you at all now that you’ve won with Free Solo?

That’s an interesting question. I guess I haven’t changed, I’m always about keeping it real. We have a lot of opportunities in front of us but our motivation is still the same. We pick and choose carefully (as far as choosing stories to tell), which is what we have always done.

In making the films you have, you’re dealing with such a dichotomy – on the one hand you have core mountain athletes, on the other, high-ranking studio execs. Is it difficult navigating such different worlds? Both are high stakes.

I guess having a lot on the line and making decisions that are very high stakes is not new terrain for me, so in fact, talking to a studio head about financing a major film isn’t any higher stakes than other projects or expeditions I’ve been involved in. It’s at the heart of who I am. The core inspires me, keeps me motivated. And that’s still the same things that have always been at the core of who I am and what’s kept me motivated. I’m continually inspired by the level of purity in my friends and why they do what they do. It helps me to keep perspective on the world. It’s really important to spend time in the mountains, and in the water, with the people from my community. I find it’s really important on a lot of levels because it just helps keep everything grounded. And this community for me, it’s my roots. I’ll never abandon that community for anything. These are the people that are really important to me.

That doesn’t mean, creatively, I don’t love working with the film community. The film industry opens up a lot of different potential which is really fun to explore. It’s that spirit of exploration, the ability to kind of adapt to another kind of community, it’s great. There’s lots of people that inspire me.

Happy place… Stoked to join @codytownsend on one of his @the.fifty.project missions to climb and ski the fifty classic descents in North America. We had a fun day on the Grand. The ski conditions weren’t world class but the company and suffering were. More in stories. Thanks for the 📸 @bjarnesalen @yeti @arcadebelts

So in looking for new stories, are you sticking to the mountain genre or are you looking to delve into the mainstream like say Jon Krakauer did as a writer?

So which was more stressful for you, filming Meru or Free Solo?

The net level of stress is probably equal. I measure it by net stress. The stakes at any given point were life and death. In that way they were similar. There were different kinds of pressure surrounding the filmmaking aspect, producing, but, just going back to the two films or the reason why they did well, they were speaking towards bigger universal truths, choices you make in life, what you choose to do in life and what are the value propositions you’re accepting for choices. People might not be able to relate to free soloing El Cap but they can relate to the idea of greatness and trying to achieve the impossible, overcoming obstacles, a belief in friends and trust. The actual physicality of a story might be unrelatable to people who don’t climb. But they relate to these characters because they speak to universal ideas and confront universal challenges. When you think about types of films we’re interested in making in the future, you can understand how that applies across a lot of different genres and spaces.

Do you feel like any of the choices you made while filming Alex impacted the way he climbed El Capitan?

There are thousands of choices you have to make. We hoped not. Those are choices he made. You still have to make a thousand choices (as a filmmaker): how are you going to rig, when are you going to rig, what sacrifices are you going to make, we only have a limited amount of resources, a fixed budget. There’s a lot of decisions you have to make that don’t have anything to do with what Alex decides to do. We have to make our decisions based on how we were going to shield Alex from external pressures and production pressures so they wouldn’t affect him negatively in any way. That comes from working with Alex over ten years. With pro athletes, you’re always being sensitive to what they’re trying to accomplish. That sensitivity is really important. But it’s probably impossible to say our presence didn’t change his approach.

This is a favorite question of the media. I’m not blaming you for asking (laughs). Yeah we would have made the film. It’s about the process, it’s about who he is: a person living with intention. Did we think he was going to do it if he wasn’t 100 percent sure? Do we trust Alex in the sense, is he going to go up there if he’s not feeling 100 percent? I know that he makes good decisions. He’s one of the most instinctual people I know. Are some things outside of our control that would cause him to fall? Yeah, but that happens every time you’re filming things like this. If you’re filming someone skiing a huge spine in Alaska, the stakes are always high. You have to talk about all the potential outcomes. To not think about the unpleasant things and ignore the outcomes outside of what we hope is going to happen, that would be very irresponsible and short sighted. You have to confront those issues, and we always knew we were making a film about Alex and a character portrait and why he does what he does.

It was a rough spring for the climbing community. Did the deaths of Jess Roskelley, David Lama, and Hansjörg Auer change anything at all for you?

I’ve lost a lot of friends in the mountains, and a lot not due to the mountains. When people put this weight on whatever the most recent tragedy is, does that change everything? No, it doesn’t change anything.  We’ve all accepted the value proposition, as did all the athletes who have passed. The point is that everybody has made an intentional decision and accepted the value proposition. I get calls from big publications every time something like this happens. It bothers me that people ask about this one, does it change everything? I feel like it’s an obvious answer, maybe that’s because I’m in it and it’s hard to see. When someone dies in a car crash did they accept the value proposition about getting somewhere in a car over walking?

Off to a pretty good start… Free Solo cranked out the biggest opening weekend Box Office per theater average of the year (documentary or feature) and scored the highest opening weekend Box Office per theater average for a documentary…ever! Our minds are blown…It certainly exceeded our expectations. Inconvenient Truth’s previous documentary record held for 12 years. Thank you to all that have supported and come out to see the film so far. We are truly grateful. To read more about it, hit the link in my bio. For those still waiting to see it, wider theatrical release nationwide to follow over the next few weeks. We’re just getting started! Stay tuned at www.freesolofilm.com. Hope you all get to see it on the biggest screen possible! ⚔️ @mochinyc @natgeo @freesolofilm #sodelighted • @alexhonnold finding a little exposure on the Traverse Pitch, Freerider Route.

So you’re saying it doesn’t feel totally right when media reports on these accidents?

I guess it feels a little exploitative, when someone passes. There is a line between exploitative and honest reporting and good journalism. I think we can all agree on that. How we define it is different. I don’t know how to define it. Part of it has to do with your relationship to the subject. The subject should have some say. When we made this film with Alex he was 100 percent on board. He trusted us to tell an honest story. He believed in how we tell stories.

So the fact that a certain amount of risk has already been accepted by these athletes makes these tragedies less of a story? It’s just part of the sport?

It’s about how you live your life. Do you live with intention or do you lie around and not make decisions. You can die eating donuts and watching too much TV, I guess that could be a conscious choice, but we’re exploring how and why people choose to do what they do. You can relate it to ‘this person had a vision and knew what they were doing with their time. They made a conscious, very meaningful decision.’

The directive for the entire film was that our main priority was to protect Alex’s experience. This was his experience and what he was working towards, 100 percent. The film was never the priority. His experience, safety, intent all in that space were – which is why we made a lot of the decisions we made. We were always okay to walk away and we had to be okay with that if he didn’t feel comfortable at any given moment. That’s a pretty clear line – never betray that trust with the subject. I hope the audience feels that way about Free Solo.  We used a ton of restraint. Our whole thing was offering up the story, not being sensationalist, trusting the audience and wanting them to get what they wanted out of it. That’s what I believe is good filmmaking and good writing.