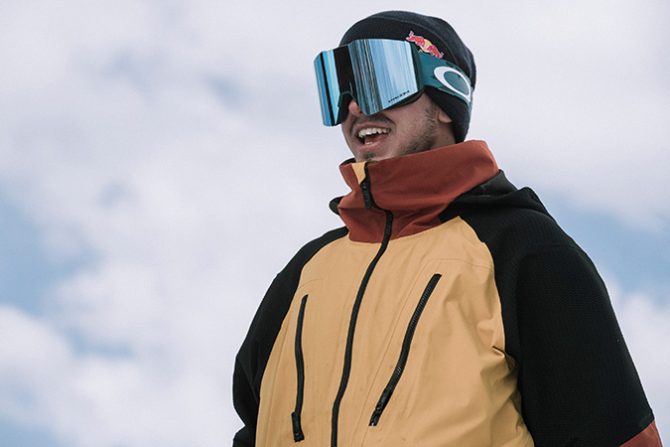 The man with the plan, Mark McMorris. Photo: Peter Morning

Professional snowboarding, for an average fan like myself, seems pretty epic. Like any of the action sports, you get to travel, do what you love, compete on a world stage, visit far off places, and get hooked up with gear. What we don’t see, is how insanely exhausting it is. How it’s pretty much a constant grind from season’s start to end. Then add in offseason training. Aside from competing nonstop, when the contest organizers say “drop”, you’ve got to drop. Then there’s doing press for your sponsors, interviews with people like me. It’s a long haul.

Enter Red Bull Recharged (there’s got to be something in that name). The Inertia was invited up to Mammoth this week to witness this “secret” snowboard contest built on the backside of Mammoth, near Chairs 13 and 14 (for all you Eastern Sierra regulars). It was huge, designed by Ben Ferguson and Mark McMorris combining halfpipe and slopestyle features and was focused more on all-around riding, style and flow, and rider feedback rather than big tricks on set features. The contest grouped riders together in teams of three, lead by Ben Ferguson, Mark McMorris, and Brock Crouch. The teams battled to get the coolest footage then kick out the coolest edit  (similar to what freeriders are doing today). The snowboarders chosen by Mark and Ben featured superstars like Maddie Mastro, Sage Kotsenburg, Scotty James, Jake Canter, Yuki Kadono, Red Gerard and almost 20 others.  In a sport where you’re told what and how to ride, the Red Bull Recharged provided a fresh take and allowed riders to team up and express creativity at a time when things are feeling pretty forced in the realm of competition snowboarding.

I sat down with Mark after the contest wrapped early due to Mammoth receiving a foot-deep “dusting” of snow in the middle of May. He explained the course concept to me and gave me the impression it’s breathing some much-needed fun, creativity, and team bonding into a now-rigid sport. Mark was super pumped about the success of this new style of event, and hopeful about paving the way for something else down the road, driving a positive change for future riders.

So Red Bull Recharged, where’d the idea come from? Was it a rider-driven thing where competitors were ready for a change?  Or did Red Bull sense the climate of its riders, who were maybe looking for some new venue to showcase their talents?

It was a combination of parties. Ben and I do all sides of snowboarding but Ben competes in halfpipe and I compete in slopestyle and that separates a lot of riders. We wanted to do something that had banks, turns, and different features that you wouldn’t see in a professional halfpipe or slopestyle contest. We wanted to do something together, combining “sides” but also an idea that has longevity to it. Not doing a big, full-fledged contest on the first year was so cool. It was more about content capture, and we created a little insider contest among each other. It’s a unique set up and we wanted a unique style of event. 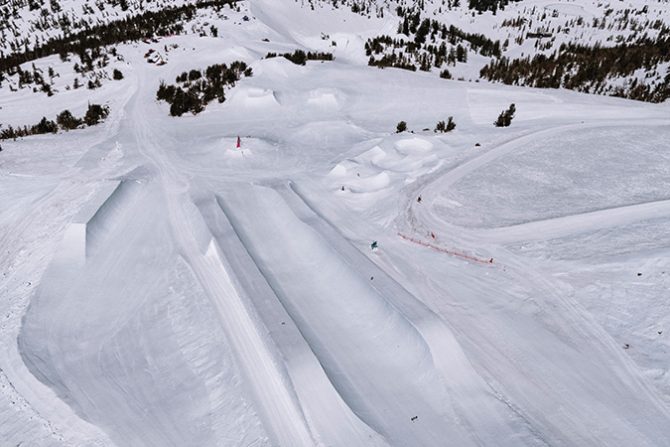 A look at the course from above. Photo: Peter Morning

How much bigger was this course compared to a typical half-pipe run or slopestyle course?

Much longer. I think the lap from top to bottom would have been a minute-thirty.

Was this contest more about style and flow as opposed to who can throw the biggest trick?

It was a lot about style and flow in the sense that the course was set up to allow that. The format also prompted that style because we broke off into teams and the contest was edit driven. Definitely, we were getting creative, but people were still going hard. When you get a group together like this and then they’re feeding off of each other, you’re going to see big stuff. People are going to go bonkers for sure. It was a good environment for it.

How is this fostering progression more than a typical course? Is it because you can bring groups together, otherwise separated, in a contest? I feel like with this type of contest, you want to drive some sort of change, in the professional snowboarding world.

Yeah for sure, we took a lot of inspiration from Danny Davis, with his Peace Park – we’ve been there for years. It was like (Peace Park), but not like that at the same time. We want to put our own (rider driven) twist on it. We just want to make snowboarding not so segregated. You need to be a great all-around snowboarder to be here. Some people really shined. Most people shined (smiles).

What was the reasoning behind doing a team format?

I think none of us want to compete at this time of the year. It’s May and we’ve been competing all year, we’re just super burnt out and over it. Snowboarding is usually an individual sport, other sports seem to be team focused, and we wanted to try that out.

Totally, even the WSL tried out a team format with the event they did at Surf Ranch last year.

Oh yeah, yeah. That was pretty cool. Because then it’s way less stress and it’s actually fun. I don’t know what’s in the future event-wise, but I know we want to keep doing this. Ben and I want to continue to have an input and influence on the contest format. It’s awesome that Red Bull wants to stay onboard with this. What we got in the four days on hill, is insane.

I was curious if this new format is also viewer driven? In my opinion, it’s really hard to understand some of the tricks that you’re doing in the X Games, Olympics, or Dew Tour or whatever – the amount of rotations in one air is honestly hard to keep track of…

Yeah, and super unattainable at times. I think this is, even though we’re still doing big crazy tricks, it’s way more attainable because we’re all snowboarding together and that’s how 90 percent of people who snowboard, snowboard. That’s what most people enjoy about snowboarding: you enjoy the sport, you’re with your friends riding together, and you’re out in nature. We were able to bring a lot of soul back into it, with this event. What we’re creating will be a way better watch than a slopestyle final. But we need to be careful not to turn it into a super-formatted contest of “you’re dropping, you’re dropping, you’re dropping.” We’ll lose that flexibility and flow. We’re trying to meet in the middle.

Was all this for a creative outlet? Or are you hoping to cause a shift in the professional climate.

I think slopestyle does a really good job at it, there’s always a tranny and something a bit different. Halfpipe is literally the same shit every time. There are some people like Danny (Davis) or Ben (Ferguson) that switch up their runs every time, but a lot of people do the same thing every time, week-in, week-out. That to me isn’t very nice for the mind, whereas slopestyle is the closest thing to “this format” that we have. I can see more creativity being thrown into slopestyle events and that’s refreshing.

So you build this sick course, it’s friendly, a team environment. But now what? Are you in some ways, bummed to go back to the regular format?

Yeah, I think that definitely this format is where we are heading, it’s such a better environment. It’s such HUGE stuff (tricks) in competition, and huge stuff can be stressful at times. But in this new format, you have a team to rely on, that’s what I really liked about this contest. In comparison to a typical event where there are TV windows, and you have to go right now, or you just don’t go. But you’re always going to do it, and that can be dangerous at times, especially when the tricks are so large and calculated. If I had to leave here and go to a normal contest right now, I’d definitely wish I was still here. I’m psyched my boots are in the trash for a while.