Eat. Ski. Sleep. Repeat. It’s a manifesto engrained into almost every skier that’s fully dedicated to the cause. However, Aaron Rice’s manifesto is a little different: ‘Eat. Skin uphill 2.5 million vertical feet. Ski. Sleep. Repeat.’ The task for any human to complete such an outlandish task is hard to envision, but that’s just what Rice did in 2016 to break Canadian Greg Hill’s 2010 world record of 2 million vertical feet climbed on skis in a calendar year.

Rice’s whirlwind tour started in Utah’s Wasatch range, where the idea came to him following Hill’s 2010 push. A year of ski bumming after college turned into three and he was at a point where he was juggling the hard choices of what to do with his life. After a month of drifting around Utah and Colorado he returned to the idea of actually attempting to break the record as a way to structure his life: “I find that goal setting in itself can be a great motivator,” he told me. “Just being out in the mountains exploring and spending time with friends always motivates me to ski more.”

But the endeavor was more than just skiing. It was a head game, too: 332 days of climbing, averaging 7,200 feet per day with some days fluctuating to more. He managed to climb 14,600 feet in an 11-hour day once but mostly, the hours were kept to eight or below. “I mostly skied, ate, slept, tried to fit in stretching, and that was about it,” he says. “Oh, and once I had a spare moment, I think I called my mom.” The dedication to the cause was fueled by way too many carbs, not enough fats and proteins and lots of PROBARS, orange juice, and soy milk he tells me as we talk about the tricks of pushing through long days.

Fresh out of the gate in January he did 10,000 feet a day for the full month only to welcome February with an unexpected obstacle–a broken hand from a fall. He pushed on yet it was the overdoing it that became a theme. “The biggest obstacle was probably figuring out how to deal with persistent overtraining syndrome,” says Rice. Operating at full capacity meant that he didn’t have much time to sit back and relax and was tiptoeing the limits of what the human body could endure. “I rarely thought about failure,” says Rice “I don’t think there’s much to be gained by thinking about failure.”

In case you missed it, the “2.5 Million” film is now live! Link in bio. I’ve talked some about how thankful I am that @tylerwr believed in me. But I also put a lot of trust in him to tell my story and I want to give a huge thanks to him for producing an amazing film. And taking some amazing photos along the way! #2point5mil @jaybirdsport @ortovox #poweryourpassion #voiceofthemountains

He spent a majority of his time touring alone in the mountains. Deep in his thoughts, you could imagine the time he had to contemplate life. In the same instance, he had to be aware of the constant risks. Nature can be a beast that shows no mercy: storms, avalanches, and or even catching an edge could have left him barreling to his imminent demise, which actually came pretty close to happening. “During the year, I did a really good job mitigating risk, I knew my exposure was going to be super high so I was extra risk-averse,” says Rice “Three months after the year was over I let my guard down in Utah and got hit by a small slide that swept me off a 40-foot cliff right before I was going to clip into an anchor.” Luckily for Rice, he came out with no more than a bruise on his hip. 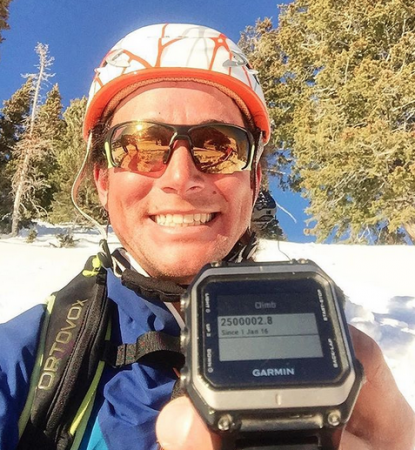 The numbers don’t lie: Rice at the end of his journey. Photo: Aaron Rice

He definitely had to follow the snow. He skipped from Utah to Colorado to Oregon and California and spent the South American winter in Argentina and Chile. It was here where he stretched his dollar, living like a shoestring backpacker and delving into the camaraderie and steep lines of the Patagonian Andes within a stone’s throw of Refugio Frey. “Refugio Frey is one of the most special places in the world,” says Rice who had been to the area once before and knew how beneficial the easy access would be for his attempt. The two-story stone hut just outside of Bariloche sits amidst a panorama of towering granite spires, alpine lakes, and endless opportunities to rack up elevation. “It was ski-in, ski-out,” he says. “You’re in the heart of the mountains where the living is easy!”

However humble Rice may be, nothing about his efforts to gain 2.5 million feet in a year was ‘easy.’

On December 29, 2016, back in the Wasatch where he started his journey amidst friends and community members he looked down at his Garmin watch to see the altimeter at 2,500,000. He celebrated with a cold beer and a party wave-like run with 20 friends. Not only had he set a new record but he added another half a million feet to it. As ecstatic as Rice was about the astonishing accomplishment he looks back at the moment as a life-changing experience but also as a feat someone else could accomplish. “I can’t wait to watch someone break my record,” he says.

Fast forward to this winter, a year after his celebration, and he just can’t seem to quit. “I’ve gone almost daily before work,” says the Vermont resident. “I think I’m at 30 days this season.” Some people are just built differently.