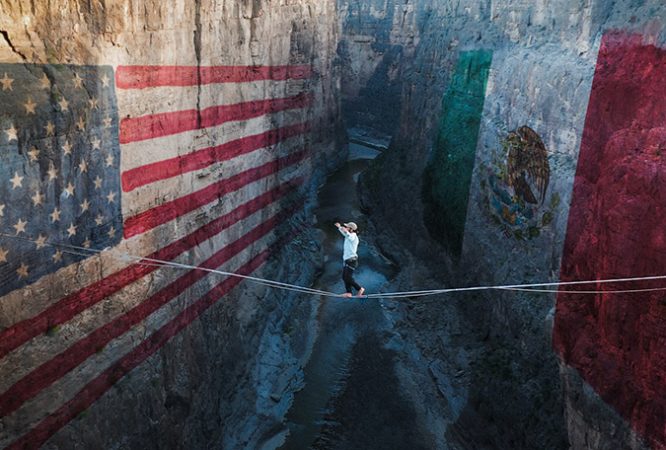 There’s a lot of talk about crossing the U.S. border with Mexico these days. But not the type that Corbin Kunst and company executed on January 25, the last day of the 35-day government shutdown. That morning, a team from Mexico and a team from the U.S. set up anchors on their respective sides of the border and strung a slackline some 300 feet long and 400 feet high across Santa Elena Canyon in Big Bend National Park. Then they walked across.

“We wanted to tell a story of humans coming together on both sides of the border,” Kunst told me. “We want people to be treated as humans. We can come together.”

To pull people together for an act like this, though, is anything but simple.

Kunst, a rope course technician based in the Portland, Oregon area, said that the idea was lodged in his head from a photo he saw of Texas’ Big Bend National Park years ago. As he watched tensions escalate along the border with the proposed border wall and the Central American refugee crisis, the idea continued to percolate. He was on the phone with his slacklining buddy and filmmaker Kylor Melton when Kunst mentioned the idea.

◂ ◀ C O N N E C T I O N ▶ ▸ This is the most important Slackline I have ever walked… but it wasn’t for myself. While our governing bodies are fabricating a ‘national emergency’ to create division, we are here to stand together. This project is about giving a voice to our Mexican friends and neighbors. This isn’t a stunt, but rather a collaboration. This is just the beginning… Stay tuned. Full story coming soon!

“(Melton) was like, ‘Let’s do this, this week, right now, during the shutdown,’” Kunst says. “He actually had a paid job in Southeast Asia he bailed on to pursue this. He was really excited about the power of the story.”

But Kunst’s work as a rope technician keeps him busy for weeks or months at a time in various locations around the world. He was in California at the time and needed to finish up the gig he was working on.

But he and Melton got cracking on logistics, Melton sending him updates “every five minutes.” From the beginning, Kunst only wanted to move ahead with the project if it could be a collaboration between the two countries. Luckily, he and Melton had made friends with the Mexican slacklining community over the years and had plenty of people to call on.

“I never would have done it without a Mexican team,” Kunst said. “My main stress wasn’t rigging the line but finding a way to do this in a way that tells a story of people making a connection of trust and solidarity and working together. I tried to hold that intention every step of the way.”

It wasn’t easy to get a team together. Friends on both sides of the border were worried about the legal and inherent risks of pulling it off and kept bailing, even after committing. But about a week out, the two teams were solidified and started making moves to converge on the Rio Grande. Sebastian Gonzalez, who’d met Kunst a few years prior at a slacklining event, spearheaded the Mexican team.

“I was so excited because the project sounded crazy, amazing, something that all of us in the slackline community support,” Gonzalez said. “To go where we want, to do what we love, and connect with people. And this was a gigantic opportunity to send that message to everybody.”

But getting to the proposed site of the highline wasn’t as simple as walking to the edge of a cliff: the area they’d identified as ideal for the line was in the middle of nowhere, down a remote river canyon that could only be reached by raft (it would take days to get to on foot). None of them had ever been there, either. They did dozens of interviews with wildlife biologists, guides and people who had done multiple river trips to get dialed in.

Luckily, Kunst had formerly worked as a raft guide and knew just how to access the area—by floating the Rio Grande—the border itself and what they’d be slacklining over.

So, on January 24, the two parties converged in Lajitas, Texas from either side of the border, dropped some canoes and small rafts in the water, stuffed them with gear and started heading downriver.

“The river trip was definitely an added symbol,” Kunst said. “None of the Mexican team had done a multi-day river trip before. Both people have rights to the river. No one had to cross to the other side. We were literally on the border line.”

The group knew they were at the right spot when the limestone cliffs turned vertical for 400 feet, some 11 miles into their float. It was an hour before dark and they raced to the top of the cliffs on goat trails to scout out what they’d only seen on Google Earth.

What they found was ideal: boulders and cracks for a natural anchor on the U.S. side (in National Parks it’s illegal to drill bolts without a permit) and plenty of rock on the Mexican side (bolting is legal there).

The next morning spirits were high. They were up the respective goat trails in 15 minutes. Anchor building went smoothly. From there, each team threw light tag lines down to the river bottom where a team member connected them. The slackline itself was then fed across that.

“(The Mexican team) was trusting the (American team) would do their best,” Gonzalez said. “We were having such a nice time rigging, just laughing and smiling. Being in the middle of nowhere, watching the sky with such beautiful colors with the super solid rock and the river far below … I remember every moment of that.”

Then, when the line was rigged, all that was left was to walk.

Two people from each country walked the line. It had been decided that Jamie Marrufo, of Mexico would walk first while the others watched or filmed. “We were just trying to capture the analogy of trust not only between Corbin and Jamie walking the line but between the Mexican team and the American team,” Melton, the filmmaker, told The Inertia. “That they trust each other enough to trust their lives on this line, this one-inch piece of webbing.”

Kunst was ecstatic after the walk.

“We had fantastic walking experiences,” Kunst said. “The energy was amazing.”

The teams filmed all day and spent the evening around the campfire, swapping stories of the shared experience. The next day, they paddled out.

“After that much paddling with each other, knowing each other, laughing, talking about the cultures, and about Trump, of course, we became a kind of family group,” Gonzalez said about the river trip, which was a first for his whole crew.

Melton and Kunst are currently working on the film, which they plan to release on all platforms and take on a festival circuit later this year. But their larger mission is to get people inspired to get active regarding the crisis on the border.

“We’re hoping people want to get involved after watching the film,” Kunst says. “To stand with us. This issue isn’t going away.”

Gonzalez, in Mexico, hopes for much of the same.

“The people in Mexico are definitely feeling (this conflict) really hard because the U.S. is our neighbors and in Mexico we don’t have the same quality of life as you do,” he said. “Just because of that we’re going to fight with each other? We want to always be friendly and work with each other, to make the world a better place for everyone. Seeing my friends work that hard to spread that message, it’s amazing.”