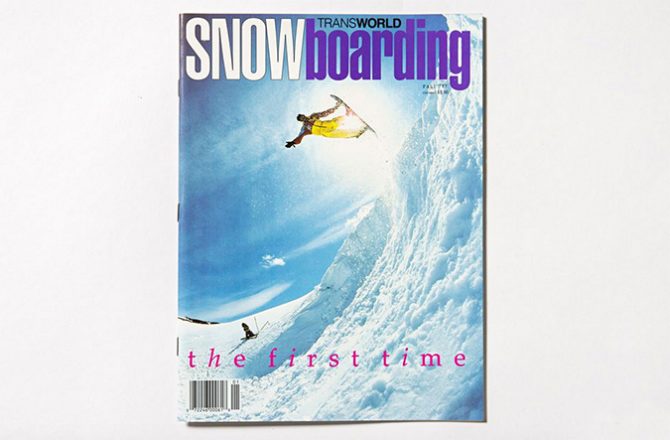 Former editors and photo editors put together this fantastic collection. Find it here.

My generation has always been stuck in the middle – the middle of a transition from print to digital. All the scribes, and editors and drinking buddies and, mostly, friends I’ve known from the grind out here in the publishing world through the years. For shockingly modest compensation, we’ve toiled in cubicles, working frantically to double proof pages while setting up photo shoots and trips for freelancers, paid contributors and put out fantastic print products covering the pursuits we live and breathe. All while trying to stay relevant and smart online with small, spread-out staffs as websites (and social media pages) quickly became the face of the brands we worked for.

I guess that’s why I was mildly surprised when American Media shuttered Transworld SNOWboarding and the print side of Transworld SKATE last month. Subscribers were offered a subscription to Men’s Journal to fulfill their already-purchased magazines that wouldn’t be arriving (below). It was a final punch in the gut, to say the least, and a poor misread of a brand  and its audience. Both magazines had grown, and spread the good word, of two important pastimes. A piece of American youth culture had died.

Thankfully, former photo editors and photographers at Transworld SNOW put some of their favorite moments from 30 years of magazine making online as a way to say goodbye. There’s so much good stuff in there. A place where careers were born, grown and sometimes forgotten and where the early days of the rebel sport were recorded. The goodbyes from athletes and photographers and editors on social media were pretty epic last month as everyone tried to come to grips with what was happening. The irony is not lost here that the magazine is now being displayed on longtime rival Snowboarder’s site.

“Effective February 1, 2019, Transworld Skateboarding will no longer be published.” pic.twitter.com/fHcZzZwU4b

The downfall started, I suppose, when TEN, first SourceInterlink, formerly the Action Sports Goup, now the Action Sports Network (where I happily toiled for a decade), purchased Transworld in the first place during the middle of this decade when it already owned SURFER, Surfing, Snowboarder, Skateboarding, Bike, Powder, Canoe and Kayak, SUP, etc. The move was not heralded in the building at the time. And it was the beginning of the end as titles like Skateboarder (the mag that brought Dogtown to life) and Transworld SURF (the mag that brought Chris Cote to life) went bye, bye almost immediately. Other titles followed (see Surfing) and the rest is now left to nostalgia.

I can’t believe it’s over. When I was a teenager I used to treat 7-Eleven like it was my personal library and read an issue cover to cover on a Friday night. I remember reading a profile of Craig Kelly, being mesmerized by his style and concluding that he was the Tom Curren of Snowboarding. At 22, after trying my hand at literally everything…landscaper, drywaller, framer, insulation installer, supermarket floor maintenance guy, bank teller, credit card machine salesman, night janitor, window washer, pool cleaner, busboy, barback, bouncer and waiter…a chance encounter while bussing tables at the Potato Shack in Encinitas would permanently change my life. I landed a job answering the phones at the then small but mighty Transworld Skateboarding and Snowboarding magazines in Oceanside, Ca. I’d finally made it. I’d gotten a job at The Bible. The list of legendary humans I got to work alongside is illustrious and long. Each of whom encouraged, mentored/supported and put up with a kid who had finally found his tribe but didn’t yet have a particularly honed skill that he could excel at outside of his enthusiastic passion for the culture and mighty gift of gab. Receptionist, product sales and video magazine production assistant were my titles during my few years there but it was Transworld’s ‘Board Aid’ event in ‘94 at Snow Summit where a microphone was first put in my hand. I’d overheard Louise Balma stressing loudly near my post at the front desk that they hadn’t yet found an MC for the event. Naturally, I blurted out that I thought I could do it. Somehow, Louise decided to give me a shot. I crushed that first event which would begin many years of live PA announcing, at trade show skate demos (mentored by Double D) snow big airs/halfpipe events and local surf comps. The rest is history. Thank you especially to @dinenna @lavidalucas @shemispheres @jgrantbrittain @jonfoster @louisebalma @jodymaus @timwrisley @atibaphoto @tednewsome @ericblehmofficial @kimballotaylor @skinphoto @daveswift01 @bucclife to name a few, for your steady friendship and guidance in those years and beyond. Y’all are my family for life. Those years shaped the man I am today. #RIPTransworld

The lesson? In my mind, it’s that print, and media in general, is not meant for corporate ownership: Filling out spreadsheets, making profitability forecasts, putting in PTO, communicating with IT, circling back. Look at Sports Illustrated? Aside from a few newsworthy investigative stories over the last decade or so, the publication has made more headlines for its layoffs as a Time Inc. product than anything else lately. And it’s constantly rumored to be on the sales block. No, to me media outlets are meant to sustain small groups of honest, hard-working editors and writers and photographers and videographers covering subjects they’re absolute experts on to inform and entertain their audiences. It’s pretty simple.

This isn’t necessarily anyone’s fault, I suppose, just the world we were all born into, our careers stuck during that in-between era when media was in transition. The gray period. Print can still survive, and thrive, in a specialty situation. And it certainly will. But I guess it all makes me pretty thankful to be sitting right here.