Opinion: As Snowboarders, We’ve Been Divided and Conquered, and That’s Not a Bad Thing

When, roughly 3,000 years ago, the Assyrians came up with the idea that they could successfully divide and conquer the unwitting Babylonians, little did they know that they would be laying the foundations for Facebook’s brutal crushing of the traditional snowboard magazine, the evisceration of myriad snowboard niché brands and, most importantly, the rise of the tiny home.

Here’s how it played out.

This was the time that I fell in love with snowboarding, when snowboarding had a very strong and cohesive sense of its identity.  That clear identity made it simple for me, as a teenager trying to latch on to something cool and stand out from all the future accountants and wedgie-giving frat boys. I signed up to be “a snowboarder”.

Now you might be tempted to deduce that I see this as a bad thing, given the way I have set this up. I don’t.  Snowboarding is all the better for its bountiful creative avenues, for all its kaleidoscopic mixology and for all its randomness (I’ll get to that later).  But strangely, it is also now poorer. Much poorer.

The idea behind dividing and conquering was that if you can get a population to identify their differences rather than their similarities – you can destroy a nation’s desire to fight as one.  If the people in one valley don’t like the people in the next valley (let’s say, because they make their cheese differently) then they are far less likely to fight together when the Romans come rolling through town.

This is how (along with, admittedly a few other things like military strategy, sanitation, and straight roads) the Romans were able to dominate Europe and significant chunks of Africa and Asia for two thousand years.

Whilst all this has been going on, we have also seen the rise of social media. I don’t think it would be unfair to suggest that social media has aggressively tugged at the loose strings of society’s fabric and pulled apart what used to be quite a nice woolly jumper. Social media amplifies our differences, builds micro-communities of self-re-enforcing idiocy to the point where you’re able to find a group of like-minded people no matter what weird, depraved nonsense you’re into.

But it is too simplistic to say that the ever-decreasing circles of social segmentation is wholly a bad thing.

There was a time not that long ago, in the UK at least, when there were only three TV channels.  Yes kids, imagine that if you wanted to watch something, you had only three choices. Not the trillion which you have today, when you’re able to explore the depths of YouTube, Instagram, Facebook, Netflix, Amazon, Hulu, etc. – let alone cable or satellite TV.

So when what we saw, what we read, and thus what we talked about was so curated and was so closely governed, it made our differences less apparent. We had stuff to talk to each other about at the water cooler. The big game. That episode of the terrible soap opera. The news. And so we all rubbed along far better than we do today.

But the lack of choice, on the flip side, made it so much more difficult to discover and immerse ourselves in our passions. As a kid, I would have literally sold my mother to someone with leprosy and a love of French kissing in order to watch snowboarding content on-demand, at any time, anywhere. But now that I can… now that we can all bury ourselves inside our content bubbles and explore the extremities of our differences… we have all ended up poorer.

Less influential. Less commercially successful. Less able to project our sport as we want it to be seen.

The Olympics has conquered competitive snowboarding. Not unlike the Romans, with their superior organizational skills, matching polo shirts, political influence, and money. The Olympics have taken a huge mallet to our sport’s watermelon. They laugh at the incoherence of our multiple, competing, competitive outlets because they have appropriated snowboarding, packaged it neatly, and made it work for the bag-of-chips and guacamole-dip-eating masses.

The diversity of snowboard brands has been shrinking faster than the number of fish species in the Great Barrier Reef. That’s not to say there isn’t any diversity – the guys at Gentemstick and Lobster and Korua would quite rightly take me to task on that, but because each of snowboarding’s factions have been stuffed into smaller niches, focusing on one sub-set, snowboarding is simply less economically viable. As a consequence, I would assert that we are seeing a drift towards what is beginning to feel like an oligopoly of mega brands. Snowboarding isn’t unique; this happens in most industries. You have to be all things to all men and women (or charge a lot of money for things that don’t cost much, which isn’t ever going to work in snowboarding) if you want to keep the profit and loss statement in the black.

Facebook has conquered traditional snowboarding content channels. It divided us all up into tiny groups and has slowly reduced the oxygen available to each of us. This drawn-out asphyxiation, not unlike being buried under an avalanche, has taken just about every one of our beloved brands.  When Transworld hung up its boots and told me to read Men’s Health (or whatever it was) instead, I felt like sending Mark Zuckerberg a poo in a plastic bag post. But it’s not Zuckerberg who is to blame, it’s all of us. We stopped buying magazines because we could get our fix by scrolling down.

Weirdly, by pursuing our passions, by seeking out our own special interpretation of snowboarding, we have allowed ourselves to be divided, we have been conquered, and so we are now watching the Romans eat all our vegetables, sell our cattle and take our daughters back to Italy for a romantic dinner.

Snowboarding has splintered, with social media all too willing to play wingman to that paradigm shift. There is no money left for anyone. There is nothing left in the kitty to pay for the riders. They have to get summer jobs, hustle, pretend to like caffeinated sugared water and pummel Instagram with ever-more inane details of their lives to have any hope of making a buck.

Before mass hysteria sets in and people start running around screaming that everything is collapsing in on itself, the end of the world is nigh, and that cats and dogs will soon be living together… hold on… take a deep breath.

The end of the world isn’t nigh. Snowboarding is in a good place, a truly healthy place.

I would argue that snowboarding is becoming what it really always should have been.  A sport or a lifestyle that is pursued by those for whom it is a true passion. A true love.

There may be no money left to pay for high-rollin’ contest checks or to bankroll a playboy lifestyle for hundreds of pro snowboarders, but what that means is that the people who are still snowboarding (however they choose to do it) are the ones who really like it.

And so we arrive at the tiny home.

Seeing riders of all shapes and sizes foregoing the luxuries of modern life to live in the back of a shitty, beat-up camper van for months on end (where they have to poo less than a foot from where they chop their vegetables) so they can afford to snowboard all winter is both humbling and exciting.

The industry may have collapsed around the riders, but out of the wreckage is emerging a simpler, purer version of snowboarding. A form of riding that can mutate to accommodate anyone’s vision, anyone’s interpretation, anyone’s taste. A form of snowboarding that just exists for its own sake, not to make anyone rich or famous, just to put smiles on faces. 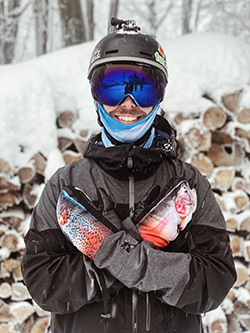 Just do you. Photo: Bogdan Cadar

We may have been divided and, by some measures, conquered, but we are actually living a good life. As Marcus Aurelius might have said when he was first penning the philosophy of the Stoics, every obstacle presents an opportunity for us to discover virtue. It is because of the struggle that we will become stronger, happier, better versions of ourselves.

And if I remember right, the Roman empire eventually collapsed anyway.

Editor’s Note: This the final part of a a three-part series that examined snowboarding in essay form. David Blackwell is a longtime columnist for Whitelines. Read Part II, here.